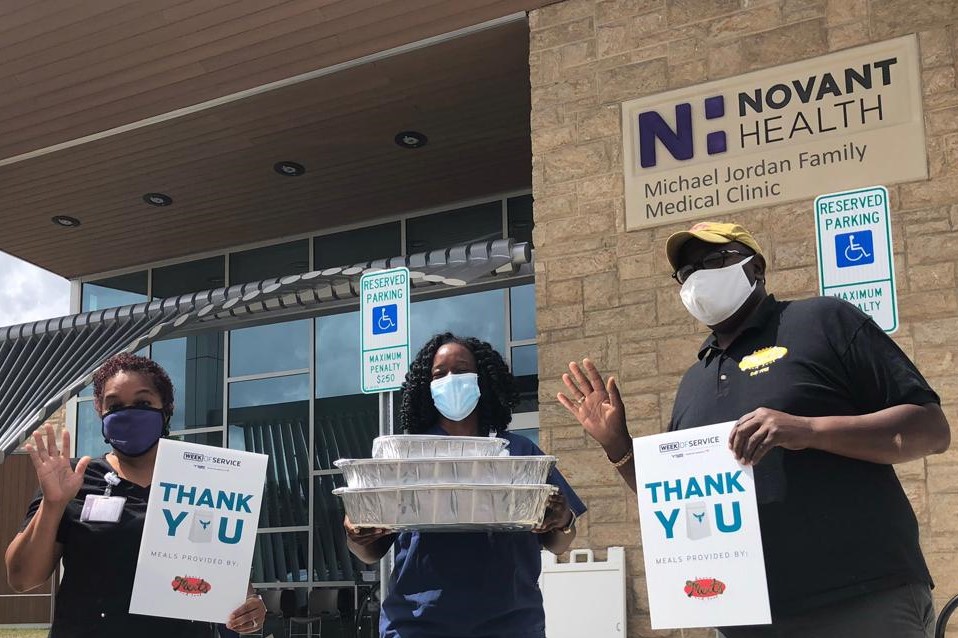 Mert's Heart & Soul was one of the Black-owned restaurants to participate in the Charlotte Hornets' Week of Service initiative that provided 2,020 meals to essential workers and families in need. Photo courtesy of Charlotte Hornets

Hornets Sports & Entertainment is accepting applications for its Innovation Summit, a new initiative to support minority-owned businesses. The summit is part of the organization’s social justice platform, which launched Monday to coincide with the Martin Luther King Jr. holiday.

Businesses with at least 51% minority ownership can submit an application and one-minute video pitch for a chance to earn a $15,000 investment from the Charlotte Hornets Foundation. Submission deadline is Tuesday, Feb. 2. Apply here.

Betsy Mack, the foundation’s executive director, said social justice and economic mobility have been areas of focus for the Hornets organization since 2016. Conversations began that year, she said, after the killing of Keith Lamont Scott by a Charlotte-Mecklenburg police officer, followed by the release of the Charlotte-Mecklenburg Opportunity Task Force report in March 2017.

“With those two events, we really started to focus on our involvement and where we wanted to plug in,” Mack said.

“We are excited about continuing to be more intentional about how we position our efforts,” he added.

The NBA played a leading role among sports organizations during last summer’s racial reckoning. About 80% of the league’s players are Black. Players have marched during nationwide protests and leveraged their dollars and influence to call for social justice.

Locally, the Hornets added a focus on Black-owned businesses as part of the 2020 Week of Service. The organization also engaged with CLT Gives Black to promote Black-led and Black-benefitting organizations during Black Philanthropy Month and restructured the Pick and Read program to highlight Black authors and books with Black main characters.

Michael Jordan, chairman of the Charlotte Hornets and the NBA’s lone Black team owner, also has taken a more visible and vocal role in race-related issues. Jordan and Nike’s Jordan Brand committed $100 million over the next 10 years to racial equality and social justice initiatives. The NBA legend also stepped in to mediate when several players wanted to cancel the modified season following the police shooting of Jacob Blake in Kenosha, Wisconsin, last summer.

“Social justice is something that’s very important,” Mack said. “It’s in the DNA of who we are as an organization from leadership down. This is what we stand for.”