Women, particularly women of color, have been affected economically more than men throughout the pandemic, according to recent jobs reports. 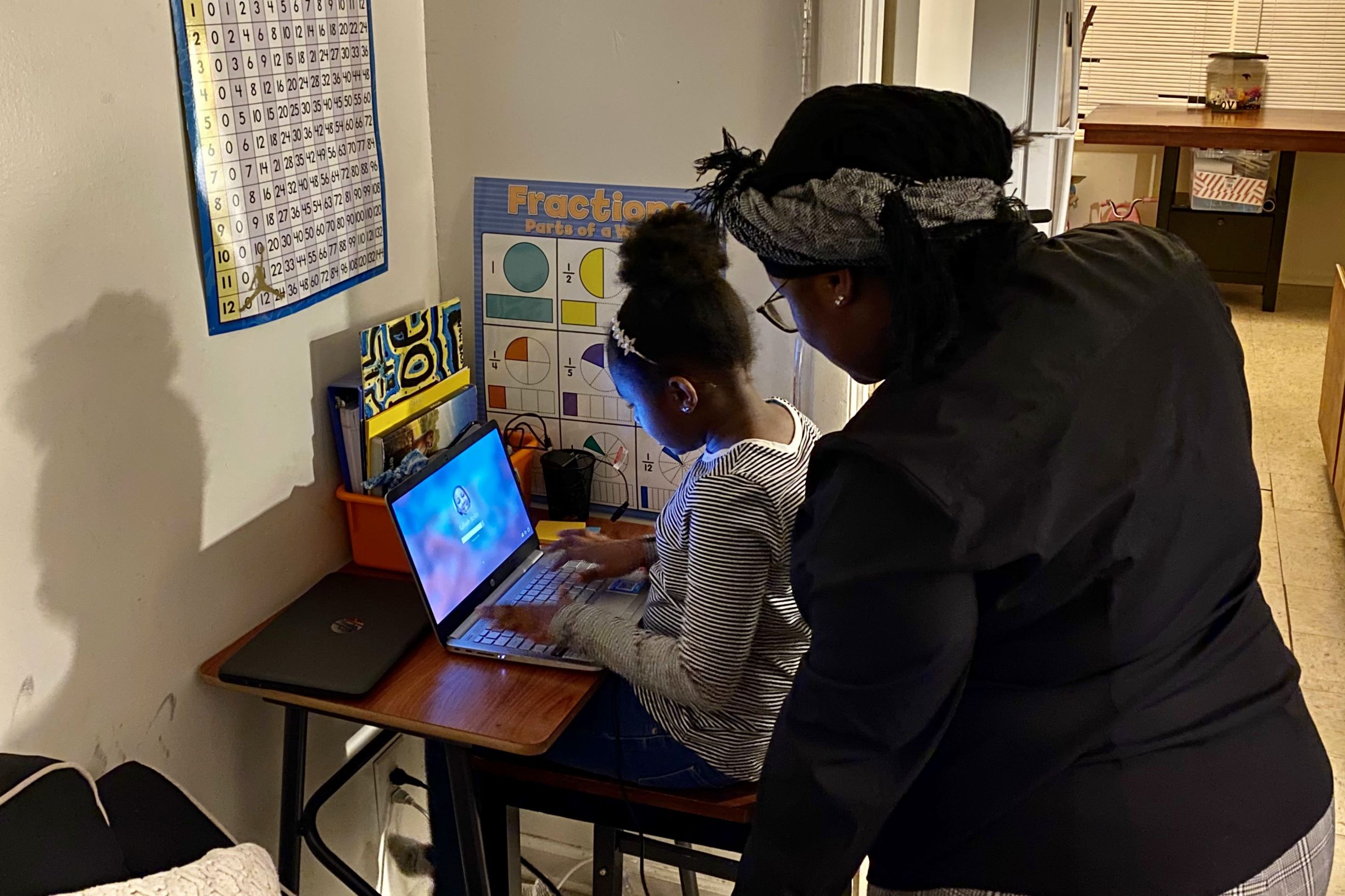 Quineisha Bollin is a single mother of five. Her kids now stay home to attend school online while she goes to work. Photo: Gracyn Doctor

In the hour Quineisha Bollin has been home from work, she has started dinner and checked on her five kids. It’s a cold Thursday night. Gospel music plays in the background as two of her daughters sit around the coffee table, coloring. Her oldest two are in their rooms, and her 2-year-old is with family. Things appear normal but in reality, things are very different.

“Everything is just kind of a little hectic now,” Bollin said.

Before the coronavirus pandemic, Bollin would get the kids ready before dropping them off at school and heading to work. The kids would only be home for a few hours before she got home. Now the kids are home all day attending school online while she’s working at a daycare center. It’s not lost on her that while she’s watching other people’s kids, no one is home watching hers.

“The kids are here really, you know, teaching themselves, pretty much, and I have to just pick up the pieces when I come home from work,” Bollin said. “So, it’s kind of frustrating. It’s different. It’s hard.”

During the day, the oldest kids, 13 and 11, look after the youngest, 9 and 7, with Bollin checking in regularly. Since she works at a daycare, Bollin takes her 2-year-old with her to work. The thought of leaving four of her kids at home makes her anxious, and she’s often up late at night worrying about the pressure this puts on her older kids.

“I kind of didn’t want to put that on him and his older sister,” she said. “But I had to choose: Stay home and don’t get a paycheck or go to work.”

The National Women’s Law Center analyzed the December jobs report released by the Bureau of Labor Statistics. It found women lost 156,000 jobs while men gained 16,000, a trend seen throughout the pandemic. The center also found 9.1% of Latina women and 8.4% of Black women were unemployed.

Throughout the pandemic, more women than men have lost their jobs. A report out of the National Bureau of Economic Research finds the two main reasons are that the pandemic dealt a blow to industries — such as health care and hospitality — in which more women tend to work. Closed schools and daycare centers have also made it harder for working moms to hold down jobs.

This is different from the Great Recession from 2007 to 2009. Northwestern University economics professor Mathias Doepke calls it the “mancession” because job cuts happened in sectors that men mostly worked in, such as construction and manufacturing. But now the Covid-19 pandemic is hitting sectors like service work that employ more women — especially women of color.

“Covid has had a much bigger impact on minority communities. But it’s also a question of what kind of employment, what kind of job you have,” he said. “The occupations that Black and Hispanic single moms have are less likely to be the kinds of occupations that allow you to work from home through the crisis.”

It’s one of the biggest challenges they’re seeing at Families Forward, an organization helping struggling families in the Charlotte area. Of the 40 families the organization is currently assisting, most of them have single Black moms who do not work from home, said Executive Director Carrie Christian.

“They’re trying to navigate handling their children,” Christian said. “They’re balancing their children’s schoolwork and all of their responsibilities as a single mom and then also trying to figure out how to juggle a job on top of that.”

Christian says single white mothers in her program often have the help of family, friends or neighbors, making it easier to keep a job.

“There is more family support and there seem to be more jobs readily available for the white women, single moms in our program,” she said.

Bollin, the single mom, said she has some help from family, but it’s not enough.

“As always, I get through it and I feel pretty good about what’s to come,” she said. “Hopefully, it’ll be over soon.”

When it is over, and her kids are back at school, Bollin said she’s going back to school as well. She plans on taking the GED exam and then starting classes to become a mortician.

For now, she just wants her kids back in the classroom and for life to be normal again.

Additional resources for those who need help

Single Mothers Grants offers a directory of grants to financially assist single mothers with things like utility bills, rent or mortgage, medical bills and childcare, among others.

The North Carolina Department of Health and Human Services provides health care, housing and nutritional assistance, among other services, to low-income communities in need.

GoFundMe offers a list of resources to assist single mothers in any way they need, from online games for kids to financial help paying bills.