After four years of backsliding on issues relating to racial justice and climate change, we have a rare opportunity to make deep progress. 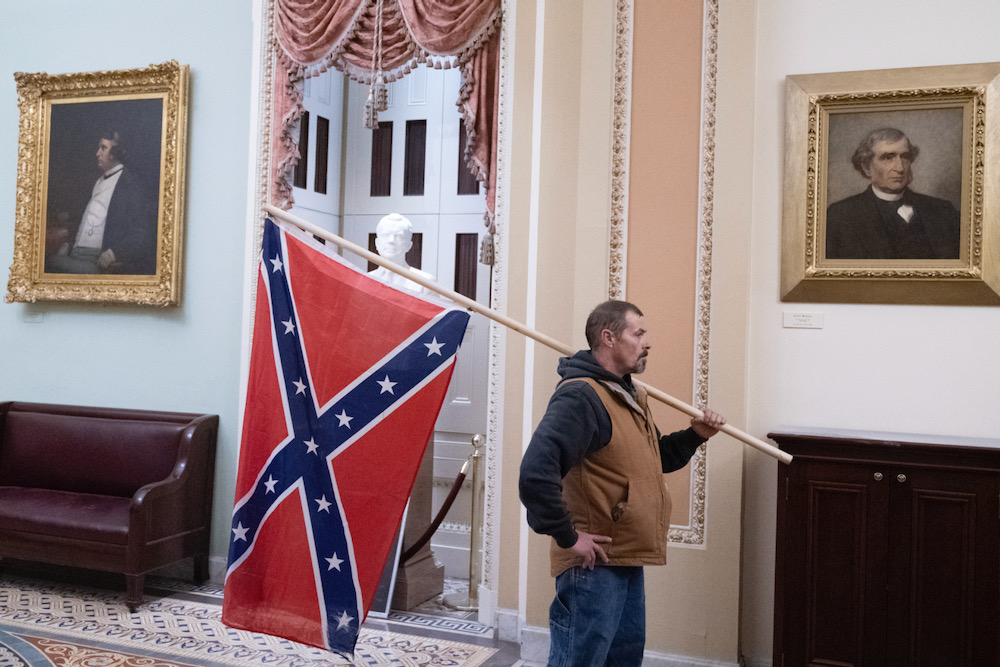 6 January 2021- Washington DC- A protester stands with a Confederate flag after storming the Capitol during a Joint Session of Congress in which members were to certify the 2020 Presidential election. Photo Credit: Chris Kleponis/Sipa USA(Sipa via AP Images)

Jennifer Roberts is a former Charlotte mayor and former member of the Mecklenburg Board of County Commissioners.

I remember an interview I had once, in the mayor’s office, when a reporter came to question me about Charlotte’s violent crime and murder rate. Doubtless it was a story fanned by my opponents’ claims that murders were up and I was to blame. From my perspective, no matter what that number is, it is not acceptable, and it should be something we pay attention to whether or not there is an election going on.

The reporter did not write at all about one of the main points I tried to make – which was the fact that racist, discriminatory systems underlie much of the anger and violence in our city and country today.  Some of my staff who were listening said that I was being too “woke” for the story, and upon reflection I wonder whether I connected the dots well enough at that time for that White reporter.

The storming of the U.S. Capitol that took place Jan. 6 – which, from some optimists’ views, could have been much worse – was another reflection of America’s original sin. Because we have built systems — of commerce, education, justice, voting and even housing – on the original lie that some people – White men, to be precise — are more valuable in a capitalist democracy than others, we continue to be a nation divided.

Everyone is weighing in on the events in Washington with their own lens. Who were the people who invaded the Capitol, threatened our elected representatives, destroyed property, and contributed to the death of 6 people? Were they freedom fighters or seditionists? Protestors or terrorists? Is there an actual reason to doubt the outcome of the election?

We cannot even come together on the basic facts about an event, and its causes and instigation, where hundreds of cell phones and reporters captured the action. Doubtless more truths will unfold as investigations continue.

But one thing already is clear: these folks (some of whom it turns out were from NC) feel like they are losing something.

With their Confederate flags, Nazi tattoos, and “Don’t Tread On Me” banners, they have shown what that something is – their White supremacy. With the recent election, which some (astonishingly) believe was so fraudulent that it created a false gap of 7 million votes (just think for a minute how much effort it would take to get the names of that many dead people and undocumented immigrants into voter rolls and machines), our country thought it was turning the corner on the Era of Trump. Some Americans probably thought that White Supremacy as a movement was losing steam, but our current president showed in his instigation of the storming of the Capitol – and the violence that ensued – that bigotry and racial oppression is alive and kicking, and willing to bash in skulls with fire extinguishers.

I truly believe it is a small minority of Americans willing to turn to actual violence in support of White Supremacy. But I also believe that far more Americans are willing to support the existing structure of racist systems, from our criminal justice system to housing and employment practices, without change – and with no real recognition of the pain, trauma, poverty, and lives that they have cost over the years.

With the inauguration Wednesday of President-elect Joe Biden and Vice President-elect Kamala Harris, “God willing and the creek don’t rise” as we used to say when I was growing up, we as a country have a rare opportunity to make deep progress on our racial and tribal divisions.  We can truly administer some balm to this gaping wound – and there is a role for each one of us to play — progressive and conservative, White and Black and Brown, Indigenous and immigrant, rich and poor, college educated and high school drop-out, gay and straight, and more.

In several upcoming columns, I plan to write more about some of the disparities that are being addressed and some that are being overlooked, as well as what is being done to address them, with varying degrees of current, future, or only imagined success.

After four years of our country’s backsliding in dangerous ways, racial justice and climate change now have a similar time frame. If we cannot make dramatic changes and improvements to both in the next few years, our lives, our country, and our planet will be altered forever in harmful ways, the extent of which we may not yet comprehend.

QCity Metro welcomes responsible commentary from all sector of our community. Email editor@qcitymetro.com.