The townhomes, priced in the high $300,000s, are the latest in a string of projects slated for the historically Black community. 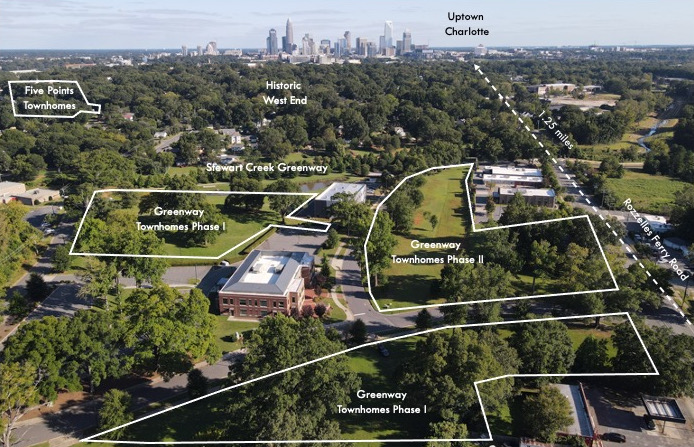 A Charlotte developer says he will begin site work this month on two residential projects in Historic West End, one of Charlotte most rapidly changing neighborhoods.

When combined, the two projects announced by Beauxwright, LLC, will add about 209 townhomes in neighborhoods not far from Johnson C. Smith University and the CATS streetcar extension.

Why it matters: After decades of neglect, Historic West End is experiencing a renaissance. In addition to the streetcar extension, the city of Charlotte has started building Five Points Plaza, a $5.5 million outdoor space that will include seating, public art and a small amphitheater. Nextdoor to the plaza, Sankofa Partners LLC is renovating a commercial building that will bring new retail to the historically black community.

With so much happening in the area, some residents say they worry that long-term families are being priced out as real estate values rise. The area has seen custom homes priced as high as $500,000.

Cooper Morrison, Beauxwright principal, said the townhomes announced Wednesday will have floor plans ranging from 1,600 to 2,200 square feet and will be priced in the high $300,000s.

Construction on both projects — Greenway Townhomes and Five Points Townhomes — is scheduled to begin later this year. Dan Ryan Builders is listed as contractor.

“It’s not a city-designated affordable townhome, per se, but it’s a lot more affordable than some of the other homes that are being built” in the area, Morrison said, adding that the homes will appeal to people who want easy access to nearby greenways, parks, breweries, restaurants and retail shops.

He said no residents will be displaced by the projects, designated for land now vacant.

That said, concerns about gentrification persists for some, but not all, residents.

“One of the reasons is because a lot of the owners are aging out,” she said. “People are dying out quicker than they are pricing out.”