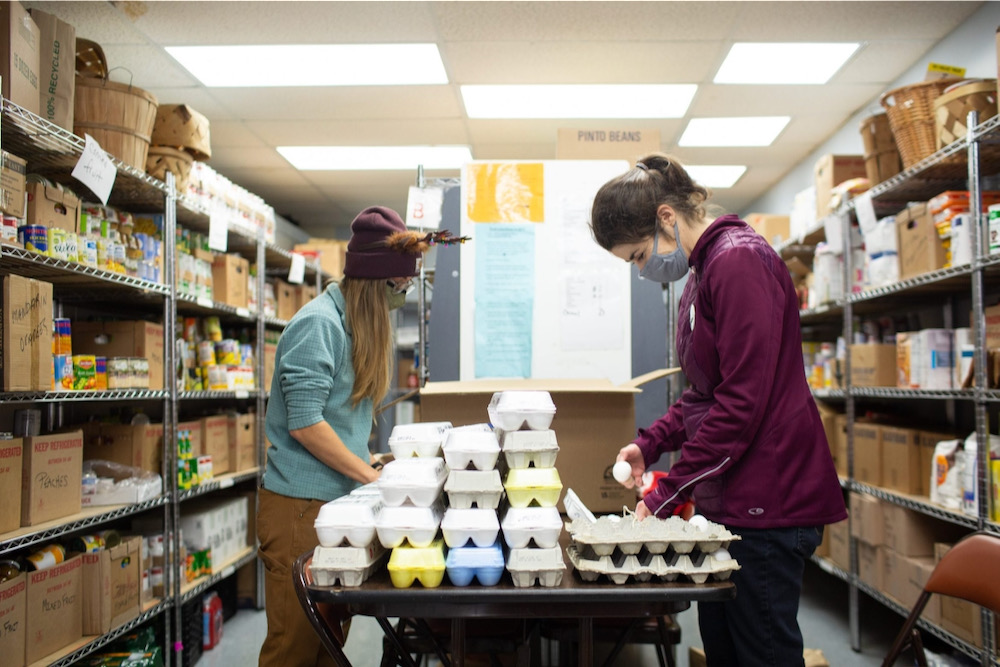 The line of idling cars snaked down the driveway of the Sharing House food pantry and around the block in the Western North Carolina city of Brevard.

When the COVID-19 pandemic first hit, Sharing House typically passed out about 80 food boxes during its weekly drive-thru distributions. On this day in December, masked volunteers passed out more than 160 boxes in less than an hour, forcing workers to break open cartons of onions, apples, bananas and eggs to assemble containers of food on the fly.

“We’re scrounging,” said volunteer Martha Post as she knelt to fill one of the last boxes to go out the door.

Nonprofits are scrambling to meet the soaring need for food aid. It’s a scene being repeated throughout the state, said Hannah Randall, CEO of MANNA FoodBank in Asheville, which helps feed food-insecure residents in 16 counties in Western North Carolina.

The Feeding America hunger relief organization reports that demand has climbed 60% nationally, and Randall said it has risen by an even greater percentage in MANNA’s service area. Meanwhile, because of the disrupted food supply chain and other factors, the stream of food contributions that agencies such as hers normally depend upon has dwindled by 20%.

Hunger aid organizations throughout the state say they are grateful for the aid in the recent $900 billion COVID-19 relief package, especially the 15% increase in payments for food stamps, formally known as the Supplemental Nutrition Assistance Program, or SNAP.

Also crucial is the $400 million for the Emergency Food Assistance Program, or TEFAP, a federal program that during the last few months has provided about 20% of food these groups donated.

And they cheered the addition, on Monday, of $1.5 billion to extend a key component of earlier COVID-19 relief efforts — the Farmers to Families Food Box Program, which has distributed 133 million boxes of domestic fruits, vegetables, dairy and meat to food banks and other nonprofits since the spring.

But the organizations emphasized that the increase in SNAP benefits is a temporary fix to a long-term problem and that they still face uncertainty about how TEFAP assistance will be distributed.

Peter Werbicki, president and CEO of the Food Bank of Central & Eastern North Carolina, said that while he “welcomes … the items in the (aid) package,” he is not confident it will meet the 40% increase in demand for food from his organization.

“At this point in time, I am still anticipating that we will see a decline in our food distribution levels from the last several months,” he said.

He and other leaders of these groups have already been forced to increase purchases of food dramatically to make up for the decline in donated commodities. That has been made possible by a surge in cash contributions from individuals and businesses and grants from charitable foundations.

The boxes distributed weekly at Sharing House, for example, were paid for by a grant from a regional health care foundation, said Shelly Webb, executive director.

Werbicki, whose food bank is the largest in the state, said donors “have stepped up incredibly. Oh, my goodness!”

His organization typically purchases about $1 million worth of food annually, he said, while in 2020, that figure was nearly $8 million. MANNA expects to spend $1 million to buy food in the next six months, Randall said, compared with $500,000 in a typical year.

The most welcome feature of the new aid package is the increase in SNAP benefits. This will cut into the demand for direct donations of food, instill dignity by allowing hungry residents to make their own food choices and pump money into the statewide economy.

“When people have enough (in SNAP assistance), they don’t come to places like Sharing House,” Webb said. “They would prefer to take that money and purchase what they desire.”

Over time, it will cut into the ultimate source of food insecurity, unemployment and underemployment, she said. “It’s cyclical because those dollars are spent where a lot of our folks work, in grocery stores and gas stations.”

One nonprofit program designed to distribute food from growers to those in need, Farmers to Families, received criticism alongside praise.

The quality of contents ranged from “a wonderful mix of healthy food,” Randall said, “to a bunch of boxes with hot dogs and sour cream.”

But the program did not make enough of an effort to include small, independent farmers, said Michael Graf, operations manager of TRACTOR Food and Farms, an Asheville nonprofit that assists such growers. Distribution was so patchy that MANNA did not receive a single box in the last round of the program, which covered the last two months of 2020.

And the reduced funding for that phase was far too little to meet the overwhelming demand, said Steven Veneziano, CEO of Florida-based Oakes Farms Food and Distribution Service, which was awarded a contract to provide Farmers to Families boxes to six states, including 180,000 boxes in North Carolina.

“That was almost nothing,” he said. “The award represented probably only 20% of the demand.”

The recently approved level of funding — $1.5 billion through April — slightly increases that amount. And despite the problems with the program, food organizations said they were happy for the help.

“This will help soften the (shortage) we were anticipating,” Werbicki said.

Farmers to Families delivered 20 million of the 122 million pounds of food distributed by the Food Bank of Central and Eastern North Carolina last year and, during much of the seven-plus months it operated, accounted for about 10% of MANNA’s donations.

It was also a lifeline for farmers.

“We took a bloodbath in Florida last spring,” said Kirby Johnson, an owner of Flavor 1st Growers & Packers, which is based in Mills River and farms in several states in the Southeast. His company participated in early funding cycles in partnership with Baptists on Mission.

“You have a 40-acre block of tomatoes and the same of squash, and you’d only cut 25 to 30 acres and leave the rest because you couldn’t afford to pick it just to give it away,” he said.

By buying produce that would otherwise be plowed under, the program helped tremendously, he said, while delivering “No. 1 stuff” to families in need.

Any problems with Farmers to Families could be attributed to the logistical challenges of starting a program from scratch and rolling it out by mid-May, said Ted Copeland, owner of Perfect Pact, a Florida-based produce wholesale and transport company that served several North Carolina counties during early phases of the program.

He praised Farmers to Families “as one of the most gratifying programs I’ve been involved in in 45 years in the industry.”

But, he said, that good feeling was mixed with “emotional distress because you find the need is overwhelming.”

Proof of that could be seen in the crushing crowd that showed up for a holiday food distribution program at a church near Asheville, Johnson said.

“You would have been amazed at how many people still need this,” he said.

That could be seen not only in the length of the line of cars outside Sharing House but also in the stories of the people inside them.

Tina Worley, 47, was left reeling financially and emotionally last year after a divorce and the on-the-job death of her 23-year-old son, a sanitation worker who had been helping out with household expenses.

Then, in early June, as COVID-19 spread, she lost her job as a home health care worker. The families of vulnerable older clients, she said, “just didn’t want a lot of people in their homes.”

Making house payments became a “major, major” struggle, she said. She fell behind on insurance and utility bills, she said, “and my credit is kaput.”

Though she was recently hired as a receptionist at a flooring store, the lower pay and accumulated debts forced her to recently seek help from Sharing House for the first time since she was a young mother.

“It’s helped a whole lot, and I’m really grateful for all they do,” she said. “Once I get back on my feet, I look forward to giving back.”