For 21 days this fall, more than 200 members of Trinity's faculty, staff, parents and alumni spent time challenging their own assumptions about race and diversity. 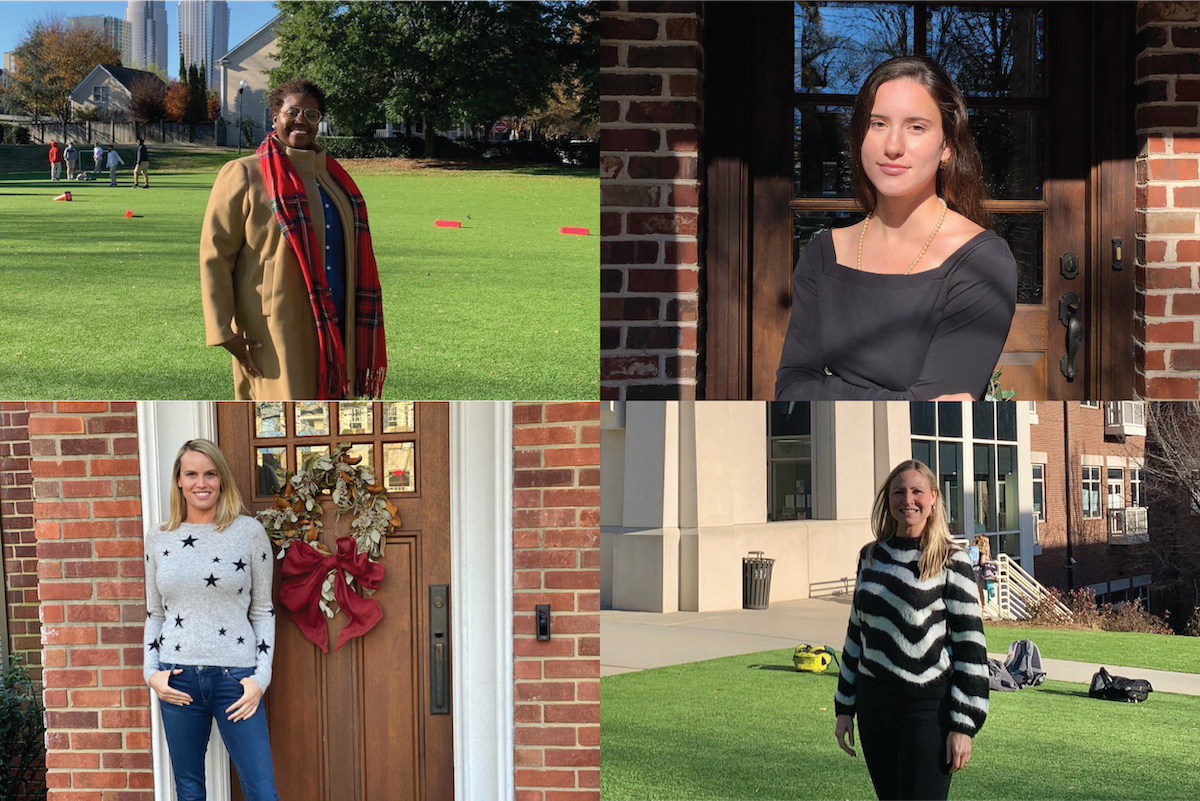 Trinity Episcopal School has embraced diversity as a core value since its founding 21 years ago. This fall, as the nation simmered in the aftermath of street protests and calls for racial reckoning, the independent school in uptown Charlotte proffered a challenge to its entire community.

For 21 days, faculty, staff, parents, alumni and parents of alumni were invited to spend at least five minutes a day learning how bias, prejudice, privilege and oppression can affect the everyday lives of some groups and individuals.

The challenge ran from Oct. 9 through Oct. 30. In all, 224 people participated, including all faculty and staff and members of the Board of Trustees. Although most of the resources were curated specifically for Trinity, the school’s challenge was modeled on the 21-Day Racial Equity Habit Building Challenge created by Dr. Eddie Moore and Debby Irving.

“Since it is such an excellent resource, we really wanted to borrow from the Moore/Irving challenge. However, it was also important for us to incorporate resources that made this our unique Trinity Episcopal School experience. Sharing experiences to develop a shared language is so important to our school community,” said Ayeola Elias, the school’s Director of Diversity, Equity and Belonging.

Some participants read books; others listened to podcasts or watched educational videos. Discussion groups were encouraged, and participants were invited to share their reflections in a school-sponsored blog.

“The 21-day equity challenge was a way for us to pull our community together to think about what it means to embrace diversity and to create a community of belonging,” said Trinity Episcopal School Head Tom Franz.

QCity Metro spoke with four participants about their experience with the challenge. Here are their stories, told in their words.

Courtney lives in Charlotte with her two children, a kindergartner and second grader at Trinity. She enjoys reading and listening to podcasts.

Considering the climate with the upcoming election and activity with Black Lives Matter, I had a desire to do something, but didn’t know what to do. I felt a weird powerlessness for how I could show my support for things I believe in. With the challenge, I thought, “This is great. Maybe no one will see what I’m doing, but it will make my heart wider and my brain more expansive.”

I was intimidated at first. I’m a tall, white blonde girl from south Charlotte. I’m not educated on what language might be the best language, or what might be the wrong words. I had nerves, but I was excited about the challenge.

I’ve heard for a long time words like “white privilege,” “white guilt,” “white innocence.” Initially I’d feel defensive. My father was an immigrant. He was born in Riga, Latvia and built himself from nothing. These books have taught me there’s no aggression in the words, and once I understood the definition of what these words meant, I was able to read these books with my head in a different place.

What stuck with me the most were the 1619 podcasts. They aim to reframe the country’s history by placing the consequences of slavery and the contributions of Black Americans at the very center of our national narrative.

What connected with me, and one of the aspects discussed in the equity challenge and the discussions we’ve been having among our participants,  is that many White people feel sort of powerless in knowing what they can actually do to truly create change. If it weren’t for Covid1-9 and shelter in place, I would have been at the marches in Charlotte. But, I do believe one of the very first things one must do is educate yourself, listen and learn about the real history of Black people and people of color in the United States, and not just the nicey-nice patriotic version a lot of us were taught in school.

I’m still reading and finding different things to stretch my brain and perspective. I started a small book club of sorts with friends from my own social circle separate from school. I have made daily efforts to examine headlines, TV shows, commercials and movies to try and notice what messages are being sent out forth. Overall, the challenge has been an excellent opportunity to expose me to so much information. “Our only chance at dismantling racial injustice is being more curious about its origins than our discomfort.”

Lesley and her family moved to Charlotte from Westchester, New York, about two years ago for work and to be closer to family. She and her husband had seen inequity in other school systems and chose Trinity for their daughter because of its focus on diversity. (The other core values are creating scholars and nurturing spirituality). Fields serves as a co-chair on the school’s diversity and belonging committee.

“I am someone who is always vested in work like this and trying to better myself and my family and those around me. I thought the 21-day challenge was an amazing venture.

Because we were so still because of COVID, we were able to see the mirror of all the injustices that plague our city, our town, our neighborhoods.

It was an amazing opportunity for all of us to do this together and not just as individuals. There’s beauty in the collective.

One of the things that stuck out to me was one of the TED talks — “Why I, as a black man, attend KKK rallies” by Daryl Davis.  At the center of his conversation was respect, have an open mind and have an open heart. Actually listen to understand and not to respond to what people are saying. Then and only then can we get somewhere along this journey, because once we stop listening, that’s when the violence and the frustration and the anger pursues.

There’s an interest in change and a thirst for learning, and with that we’re able to move forward and dive deeper together. We can learn more, respect more and hear other perspectives we might not have heard before. History has shown we have, unfortunately, misrepresented many different cultures, and now it is time for us to unlearn and undo that.

Griffin graduated from Trinity in 2017 after spending nine years at the school. Now a senior at St. Andrews School in Middletown, Delaware, she says her connection to Trinity remains a part of her identity. That connection, she said, is why she joined in the 21-day challenge.

This feature was impactful for a number of reasons.

Firstly, the content was masterful. Morrison, as always, eloquently explains the oftentimes paradoxical definition and defense of ‘whiteness’ in the United States. She exposes the “sad plight of grown white men” fighting to keep the perception of white superiority alive, a notion frequently thought to have ended decades ago but is proven again and again to still persist.

Secondly, at the time I decided to complete the 21-Day Challenge, my class at school was reading and discussing Morrison’s Beloved. The fictitious narrative of Sethe, Paul D, Baby Suggs, Stamp Paid, and especially, Denver, was given a whole new, very real, dimension through her article. Although Beloved is supposedly set in 1873, racism is not only alive but thriving in this country today, and the concept of identity is one that both black and white folks have to wrestle with in light of the ongoing racism.

Finally, this article was written in 2016, a week after the election. Four years later—and all that those years entailed—it was valuable to look back and see how little has changed.

With 2021 approaching and a new virus vaccine on the horizon, Morrison reminds us that the US is still in desperate need of its own vaccine against racism and a reckoning with what it means to be ‘white’ in America.

I heard about the challenge in an email chain for Trinity alumni. No matter how educated you are, there’s still more you can always do to learn more.

I thought I knew a lot about racism. And coming away from this experience I realize I don’t. One of the most important things I’ve taken away as a white person is that learning is the best thing you can do.

I turned 18 five weeks before the election and I was able to vote this year. Entering adulthood and really examining life and the privilege I have from another point of view has been really important and necessary. I think it’s the duty of citizens, especially white people, to educate ourselves. In some ways, I’m doing the bare minimum, but it is the first step of learning what more I can do.”

Aundrea has been a member of the Diversity and Belonging parent committee since her children started at the school five years ago.  She has a passion for history and how it informs the present as well as for representation of African Americans as founders of our country.  Scipioni worked in change management at Bank of America Corp. for 15 years before leaving the workforce to care for her family.

With my background in change management, I live for observations. Before the challenge I noticed side conversations happening in our Diversity and Belonging Parent meetings.

We were having meaningful discussions, but our experiences across race were limited.  It was difficult for white parents to understand the effects of implicit biases and how they might be showing up.  A silver lining to this year’s hardships is how they accelerated the racial reckoning we so desperately need.  I love the context and shared language that’s developing for our Trinity community to discuss racial inequality.

An Equity Challenge piece that really left an impression on me is the Serial/NY Times podcast “Nice White Parents.”  It’s about white parents who inadvertently bulldoze their way into a school with less resources, making what they believe are improvements, but the changes are not what the existing school asked for or felt they needed.

I really felt their disenfranchisement. I reflected on other examples across society where this happens and how I may have participated in it.  It really does feel like an awakening to see things you have been oblivious to or unable to see due to ignorance.  Learning about privilege is immensely humbling, but I think its connection to identity inherently creates a desire to know more.

I’m excited for what we are all learning together at Trinity. This is a very personal journey, yet there’s so much to share with one another.

Now that the challenge is done, the school is embarking on a group book reading of I’m Still Here: Black Dignity in a World Made for Whiteness, by Austin Channing Brown. To learn more about Trinity Episcopal School and the community’s work around embracing diversity, please visit www.tescharlotte.org.