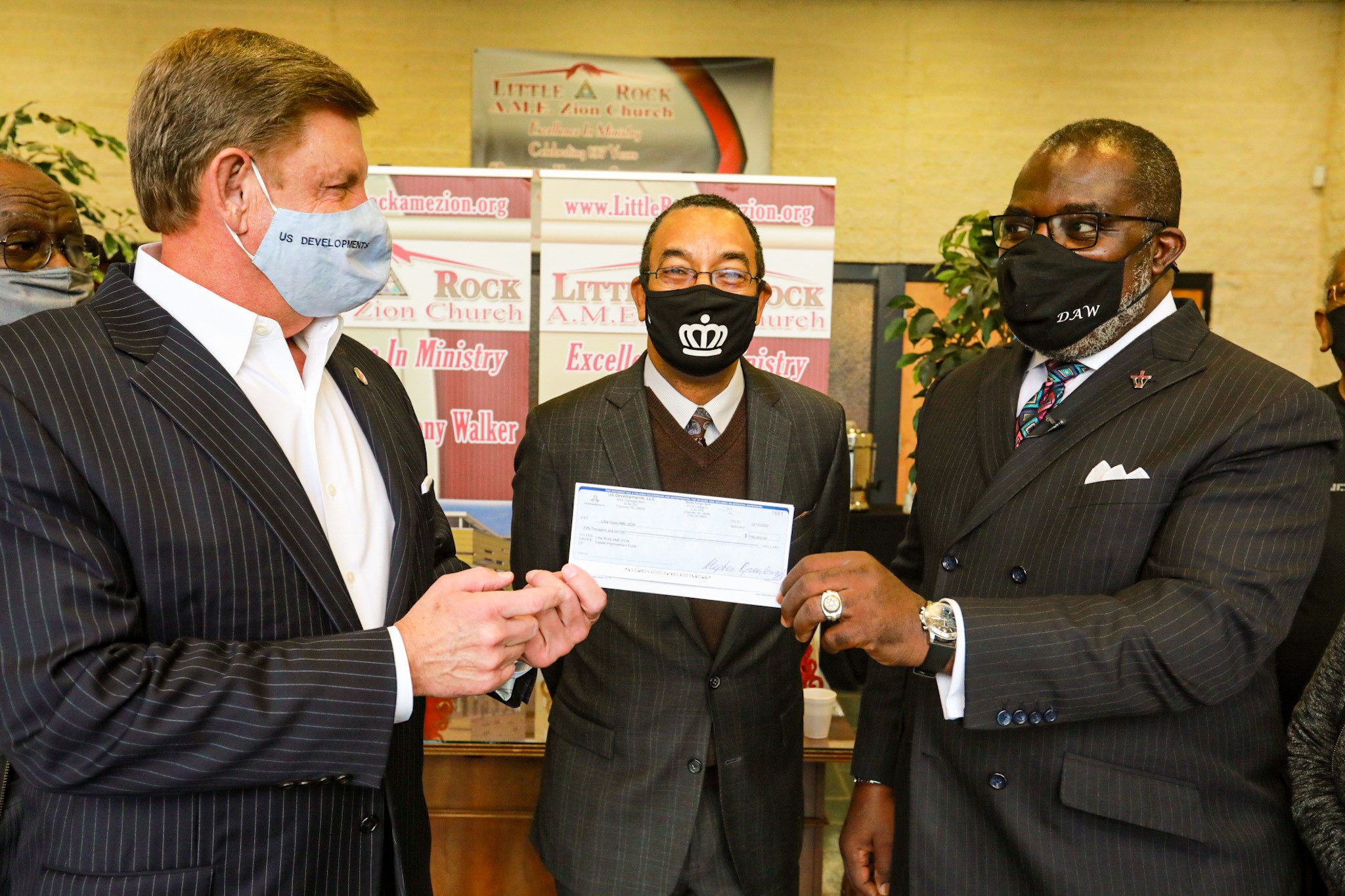 Rev. Dwayne Walker was in disbelief when he received a call last Monday about a large donation on its way to Little Rock A.M.E. Zion Church. On the other end of the phone was Stephen Rosenburgh, president of US Developments LLC, telling the senior pastor that his company was giving $50,000 to the church.

“We’re grateful,” Walker said during a phone interview Friday. “It ends a terrible year of the pandemic and struggles on a very positive note.”

Walker said the money will go into the church’s campus improvement fund, which helps take care of much-needed repairs and grow savings for future projects like a family life center.

Rosenburgh said he’s always been impressed with Walker’s leadership and wanted to help the pastor continue serving the community. He delivered the check to the church on Thursday.

“Sometimes it’s the basics, such as mortgages and maintenance, that need funding the most, so we are happy to provide that support to our friends at Little Rock A.M.E Zion Church,” he said in a statement.

The two men met in 2008 while serving together on the Charlotte-Mecklenburg Planning Commission and kept in touch over the years.

“Even though we’re total opposites politically and etcetera, there’s mutual respect and appreciation of one another,” Walker said.

The 137-year-old church, located on Seventh Street in Charlotte’s First Ward, is also the site of a mixed-income housing development set to begin construction next year.

Little Rock Community Development Corp., a nonprofit formed by Little Rock A.M.E Zion Church and chaired by Walker, partnered with residential development company Laurel Street on the 105-unit apartment building. The church donated land for the upcoming project that will include 50 income-restricted units to help the city’s affordable housing shortage.

“They’re still doing water testing on the soil, and the shotgun houses are being moved to another location,” he said. “According to Laurel Street, we expect to start construction in February.”

Read below for excerpts from the interview, where Walker also spoke about the church’s pivot during the pandemic, his experience after contracting Covid-19 and thoughts on the vaccine.

“All over, it’s been very positive feedback.”

“My position is to hopefully encourage other congregations to seek those kinds of partnerships with developers in the city to meet the needs of affordable housing. There are churches, just like ours, that may be cash-poor but asset-rich because their land is an asset.”

“If the city is in need of space to build housing, and churches have land that they can build on, then they should partner. It just makes sense to me. I hope our church does become a paradigm for other churches and the city, not only in Charlotte but in cities across the nation, particularly with Black churches that have land.”

The pandemic’s impact on church attendance:

“I know several churches do their park-and-praise services, but because of our location — we’re surrounded by apartment buildings — the last thing I want to do is to do that to the community. We know park-and-praises can get pretty noisy with people blowing their horns…and I think that would disturb people on Sunday mornings.”

“We continue to worship virtually. I have a small group of people who come in — sometimes three, sometimes four singers. I have my organist and a drummer, one minister, someone in the sound booth and someone working the camera. And that’s it.”

“Knowing that you’ve been watched by 1,500 to 2,000 people, it’s also been a surprise. I don’t know if all of those are members of our church…and they support the church, they really do, almost to the same levels that they did when they were there [in person]. I think we may have seen a 15% to 20% decrease, but then the expenses are not as high, so it’s been working out.”

“I did contract Covid-19, but I have recovered from it. In fact, I had it and didn’t know I had it. I didn’t have some of those horrific symptoms that you hear about. But when I got tested, the doctor did notice that I had the antibodies, which indicated that I had it but recovered from it. I was healed before I knew I was sick.”

“I started feeling like I caught a cold on Thanksgiving Eve. I laid down and just felt kind of cruddy. About a week later, I started feeling better. The following week, my 11-year-old grandson wasn’t feeling well. The school called his mom and said he wasn’t feeling well. She took him to the doctor, and they did several tests — one of them being the Covid test. She texted me to say that he had tested positive for Covid.”

“Of course me being a pastor, and I’m supposed to be at church on Sunday, and now I’m exposed to Covid, I said, let me go get tested. I was able to get into a clinic. The doctor told me that I had been positive, but I was fine now. Both of us [me and my grandson] are fine.”

Why he supports getting the Covid-19 vaccine:

“I’m hopeful that the vaccine is going to turn the tide. I get the apprehension people have because of the Tuskegee Experiment and other things that have happened to us along the way. But this vaccine is something I feel we need to trust. And we need to trust it because, as Christians, we’ve been praying. We’ve been praying that God would touch the minds and hearts of scientists and doctors to come up with a cure for this thing that has gripped the world. And that has happened.”

“Dr. Fauci and the FDA [Food and Drug Administration] have said the Moderna vaccine has a 94% efficacy rate and the Pfizer vaccine has 95% efficacy. With that being said, that tells me if you do not take the vaccine, you are 100% vulnerable to catching this virus. If you take it, you have a 94% or 95% chance of being victorious over the virus. I rather be 95% protected than 100% vulnerable, and that’s what I’ve been saying to my folks.”

“I’m looking forward to this vaccine getting to more people so that we can begin to mitigate the spread of this virus…and return to a time when we can be together again in church and other spaces.”

“I’m looking forward to this facility that we’ll start work on in February and, hopefully, all the benefits that come with that.”

“I just have so much hope that things are getting better instead of worse.”