Cashiers at gas stations and convenience stores aren’t typically who we think of as essential workers. How they stay safe on the job isn't easy. 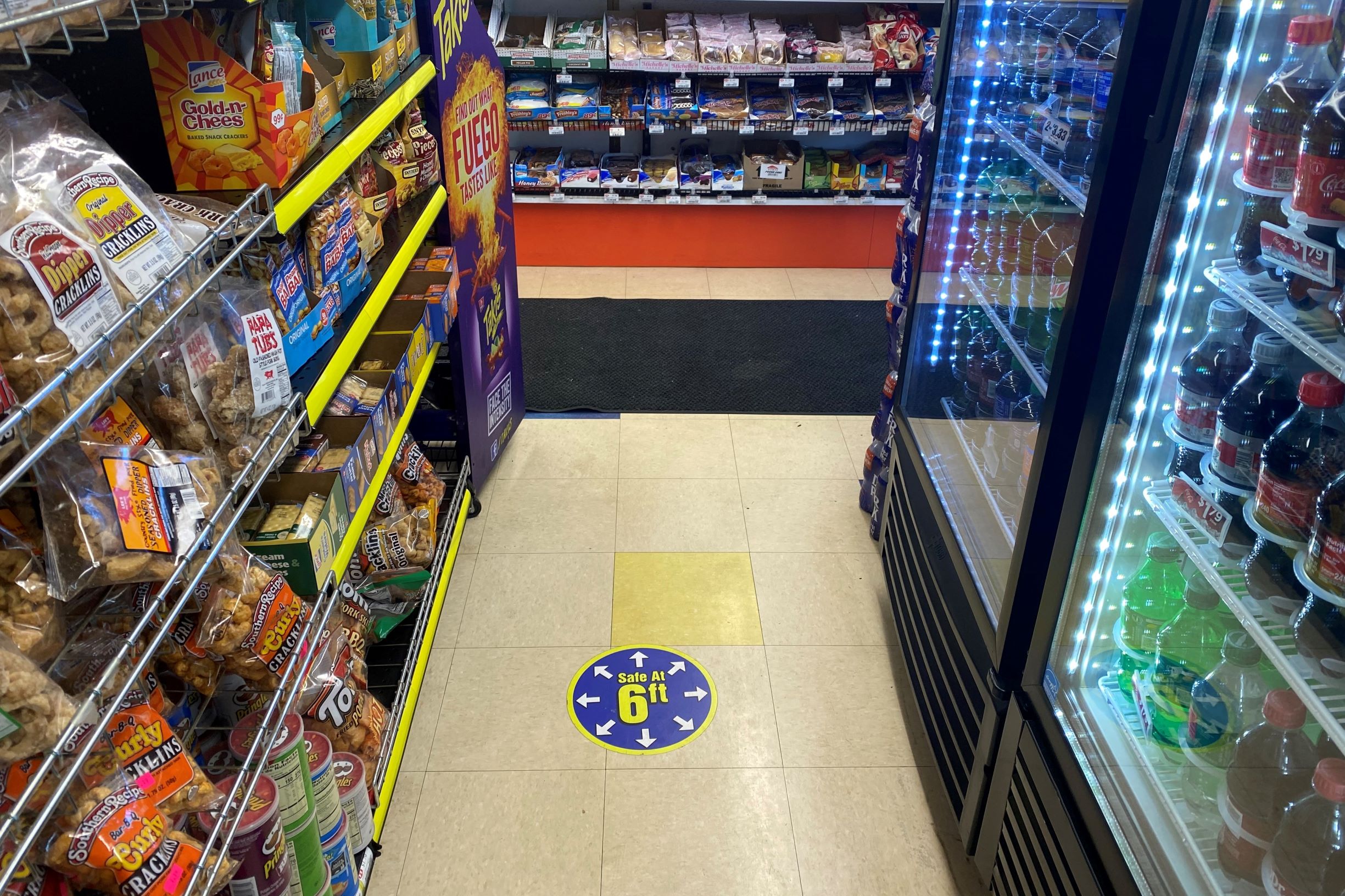 Social distancing markers can be found inside some gas stations. Gary Harris, of the organization representing gas stations says this is one of the safety measures gas stations are taking to follow CDC guidelines. Photo: Gracyn Doctor | WFAE

On a recent brisk afternoon, Denisha Jones sat by the door of a Speedway gas station in Harrisburg. She had just lost her job as a cashier.

“My experiences as being a cashier has been somewhat terrifying, seeing that the pandemic levels have surged,” Jones said.

Cashiers at gas stations and convenience stores aren’t typically who we think of when we hear the term “essential worker,” but they interact with the public daily, making sure we can gas up our cars or pick up some food – particularly in areas without grocery stores. How they stay safe on the job isn’t easy. They work in small spaces where social distancing is difficult and mask requirements aren’t always enforced.

In the month she was on the job, Jones said she had to provide her own mask and hand sanitizer. Speedway said masks are required but they aren’t necessarily enforced. Plexiglas shields are used to protect cashiers, but Jones said when one at her gas station broke, it wasn’t replaced.

“We’re still being exposed to customers and Covid at the same time because it is in the air,” Jones said. “And even the managers tell us that we don’t have to wear masks, that it’s our discretion.”

It’s these kinds of concerns from workers like Jones that prompted The Episcopal Farmworker Ministry and other organizers to petition the North Carolina Department of Labor in October. They asked for employers to take care of their workers with things like providing masks and paid sick leave if they get Covid-19. Labor Commissioner Cherie Berry responded that the department will not impose new rules to protect workers because the virus hasn’t been proven to cause death or serious physical harm at work.

From an employer’s perspective, Gary Harris of the North Carolina Petroleum and Convenience Marketers Association, which represents gas stations and convenience stores, said his members are following federal guidelines. Customers are in and out so quickly that a cashier’s exposure is limited, he said.

“The restrictions that the professional doctors at the Centers for Disease Control is 6-foot spacing, wash your hands and wear a mask,” Harris said. “That’s what everyone’s told to do and that’s what most retailers are doing. I just don’t know what else the government or a company can do other than that. They’re following CDC guidelines.”

The Bureau of Labor Statistics finds that out of all sales workers, cashiers have the lowest wage, at an average of $9.93 per hour. Sydney Idzikowski of the UNC Charlotte Urban Institute said their research shows that Black and Brown people make up most workers in all industries with the lowest wages. Many jobs in those industries don’t have benefits like sick leave, she said.

“Historic and not-so historic and racist and racialized hiring practices have intentionally excluded Black and Brown workers from high-wage jobs that typically have access to full benefits,” Idzikowski said. “So those practices, over time, relegate workers of color into specific industries.”

The University of Massachusetts Center for Employment Equity Director Donald Tomaskovic-Devey released a study that found 1 in 4 Black Americans work jobs where they’re considered an essential worker. These include jobs such as maintenance, food preparation and cashier workers.

“There’s a way in which essential workers are supporting the rest of our society by taking on the disproportionate risk from this pandemic,” Tomaskovic-Devey said.

Stronger leadership is needed from federal and local government to protect these workers, he said.

In North Carolina, Josh Dobson will replace Berry as labor commissioner in January. As the state’s numbers rise, it will soon be his decision whether stronger policies need to be in place to protect essential workers like cashiers.