‘The hardest year of my life’: At high-poverty Garinger High School, a student works to overcome Covid-related hardships

Before the pandemic, Garinger already was a school with big challenges. Now those challenges have multiplied. 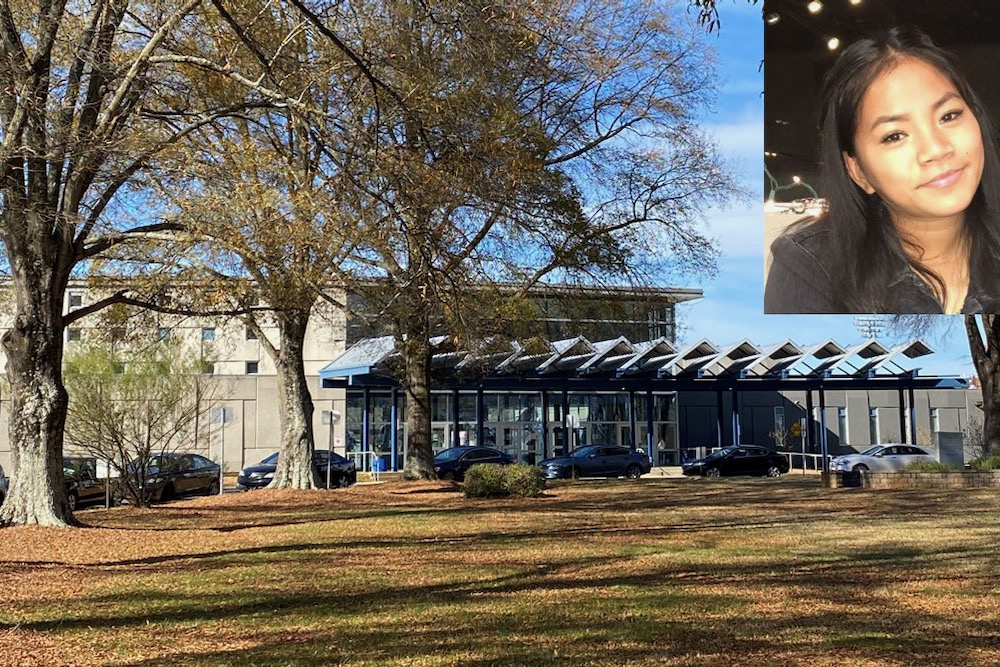 Anisha Sunuwar is a motivated 18-year-old senior at Garinger High School who’s active in student government and the National Honor Society. She’s taking advanced-level courses and working 20 hours a week at a restaurant to help support her family with whom she immigrated from Nepal 10 years ago.

Covid has pushed her to a breaking point this year.

First, she and her brother got sick with the virus over the summer. Then, her mom came down with a stomach ailment that doctors are still figuring out. Anisha is having to juggle remote learning, work and shuttling her mom to emergency rooms and doctor visits to serve as her translator.

A few months ago, with the financial and family stress mounting and missing the motivation and support she gets from walking into school each day, she says she considered dropping out.

What’s keeping her in school, she says, is a singular experience: a visit to the poultry plant where her mother works, to tell the supervisors that her mom needed to quarantine due to Covid.

“It pushed me to not want to work in a place like where she worked — to do better. To keep staying in school,” Anisha says during an early-morning phone call while waiting for her first period class to begin.

“This has been the hardest year of my life.”

Before the pandemic, Garinger High School was already a school with big challenges.

It’s one of the highest-poverty high schools in the Charlotte-Mecklenburg Schools system, and nearly one-third of its students are learning English as a second language.

It suffers from high staff turnover, a graduation rate of 67% and consistent enrollment declines over the last four years, in part because some neighborhood families are choosing other schools for their kids.

CMS data shows Garinger’s enrollment is 1,498 — a 13% drop compared with last year — which shows the biggest decline of any high school in the district. However, Garinger’s principal, Sharon Bracey, said she puts Garinger’s 2020-21 enrollment at 1,666 — which would be a 3% drop from last year. She says she’s looking into why there’s a numbers discrepancy.

This year, Garinger’s challenges are mounting higher. Teachers are struggling to keep students engaged, knowing that for some, this year will set them back or even keep them from graduating.

Anisha says remote learning is also taking a toll on her friends, some of whom, she says, are also having a tough time.

“They’re not as motivated as they would be if we were at school, because there is nobody to push them. If we were in school, we would have counselors, teachers and our superiors pushing us to do better,” she says.

“Here at home, we don’t have anybody,” she says. “Being in a foreign family, it’s hard, too, because (our parents) don’t understand what we’re doing.”

Greg Asciutto has taught English at Garinger for the last seven years, and from his trailer classroom where for now he teaches virtually, he sees Garinger’s challenges first-hand.

He thinks about the students he’s teaching remotely this year. There’s the boy who had a 3.5 GPA but now lives with a sister and lacks reliable internet. He knows many of the kids he teaches have big challenges at home and aren’t as focused as they would be if they were sitting in his classroom.

Even his AP English class, which tends to have more motivated kids, has had three kids “drop off the face of the Earth,” said Asciutto, 28. Now, the class is down to 11 students.

He tries to reach out to parents, but in many cases, it bears no results.

From jewel to high poverty

Garinger was a jewel of the CMS system when it opened in September 1959.

Journalists at the time described the building as “an extremely modernistic structure” with a brightly-colored library exterior that resembled a merry-go-round. Alumni say they recall Time magazine writing about the school’s design on its pages.

The year Garinger opened was Charlotte’s third year of what was then referred to as “token integration.” An Associated Press article from the day the school opened reported: “One negro student entered the new Garinger high school in Charlotte without incident, the only integration in the city this year.”

The area surrounding Garinger was almost all white in 1959, and the school remained predominantly white until 1971, after federal courts ordered Charlotte-Mecklenburg Schools to implement a district-wide busing plan to put into practice what the famous Brown v. Board of Education case had ordered more than 15 years before.

And so Black students, many from west Charlotte neighborhoods, began being bused into Garinger.

In the decades that followed, Charlotte grew and its demographics changed. The city’s east side began attracting new Hispanic immigrants, and more Black families also moved into areas around Garinger.

In 1999, busing ended when a federal judge ordered CMS to stop using race as a factor in student assignment plans. With students attending their neighborhood schools, Garinger’s student body looked starkly different than it did when the school opened in 1959.

Diversity as a selling point

Asciutto wears another hat besides his teacher role. He’s on the education committee for a community group called CharlotteEAST, a non-profit advocacy group for the city’s east side.

He and other members of CharlotteEAST have been looking at ways for Garinger to become more jewel-like once again. One of their ideas is to have CMS start a partial magnet program at Garinger, as other schools in struggling neighborhoods have successfully done.

Having a partial magnet program, in which some students would focus on a specific theme, would bring motivated students from other areas of the city to Garinger. It could also attract more students in the neighborhoods around Garinger who currently choose to attend other schools.

This year, however, is a tough time to make big strides toward that goal, with school officials grappling with educating students in a pandemic.

Former CMS school board member Louise Woods is with Asciutto on the CharlotteEAST quest, and she, too, thinks a magnet program could be a key to strengthening Garinger.

Woods says Garinger has long suffered from a lack of support from the school district, dating back to when busing ended and Garinger’s student body became largely poor and minority.

“There was no effort, that I could see, to strengthen it,” she says. “There has not been the attention given that should have been given to help build on the strength of the community and to give them a fighting chance to attract the most active families.”

The diversity of cultures at Garinger could be a real selling point, Woods says.

A magnet program could change the energy in the school, inspire more neighborhood families to enroll and make teachers want to stay. Students’ cultures would be celebrated, and their strengths built upon, Woods said.

“With vision, (Garinger) could really become an international showcase,” she said.

Bracey has been Garinger’s principal since 2019, but she’s been on staff at the school for the last seven years.

She believes some of the enrollment decline this year could be because fewer families are moving into the school zone during the pandemic. Garinger’s student population includes some transient families who might, say, make east Charlotte their first stop when moving here but then transfer to another area of town later.

Bracey said her staff has been “very intentional” in making phone calls to parents or home visits to students who aren’t showing up on online classes or engaging as they should.

“Those home visits help us to be able to identify what some of the barriers are for students,” Bracey said. “We know some students have assumed some work responsibilities … We encounter that more now than we would in a typical school year.”

The pandemic, she said, has made her and her staff “see the gravity of this work.”

“In this particular year, we know if they’re not engaged in school, there’s probably a really, really good reason why,” such as students logging long work hours to keep their families financially afloat.

“That’s what we call our ‘Garinger grit,’” Bracey says. “Our kids come from all kinds of backgrounds. This year, I think we see a little more of that.”

Bracey said she knows community members want to help find ways to boost the school. Telling the school’s story is important, too, she said.

“We’re hearing the community, and maybe we need to toot our horn a little about the positive things,” she said. One example she gives is a new greenhouse that was built on campus last year, that will boost science and horticulture studies.

“There are families that are considering Garinger and want to know what the true Garinger experience is,” Bracey said. “I think it’s a process for parents to explore all our options. We just want to make sure the neighborhood option is not off the table, just because of what people have heard.”

Support from alums and community

For all its challenges, Garinger does have community members who love and care for the school and are working hard to keep supporting it this year.

It has an active Garinger Education Foundation, formed by alumni who have raised more than $1M in scholarships since 2014 for Garinger graduates to attend Central Piedmont Community College or UNC Charlotte. Indian Land-based tech company Red Ventures is one of the program’s biggest donors.

Jack Brayboy, a former TV newsman in both Philadelphia and Charlotte and a Garinger class of ’76 graduate, is the foundation’s chairman. He was one of the kids who was bused across town to attend Garinger — an experience he says shaped him in profound ways.

“It gave me an opportunity to see a whole dynamic there of white folks and Black folks getting to know and understand each other,” Brayboy said. “Those are the life lessons that certainly paved the way for me to do better as I got older.”

Dreams for the future

Anisha Suduwar, the Garinger student, has an added challenge as her senior year begins to draw to a close.

She’s applying to college and is desperate for scholarships that will help her achieve her dream of being a nurse. She’s been inspired by the nurses she’s seen caring for her mother over the last several months.

“I want to be able to provide for my mom and not worry so much about money,” she said.

She said her teachers at Garinger have been “so wonderful,” and she’s grateful for ones like her school soccer coach, who helped her fill out FAFSA forms to apply for federal college loans.

Staying motivated would be easier, she says, if she could have more contact with the teachers who support her. For now, she’s having to draw from within herself to find the motivation.

“I just want my mom to be proud of her little girl.”

Cristina Bolling is managing editor of The Charlotte Ledger: cristina@cltledger.com

Editor’s note: This article is part of a collaborative series examining Covid-19’s economic effect on black and Latino communities in Charlotte. The series is produced through a collaboration among WFAE, The Charlotte Ledger, Q City Metro and La Noticia. The effort is funded in part by the Facebook Journalism Project.