With a second chance, Dave Moore pays it forward to at-risk youth and returning citizens

Dave Moore served a three-year sentence for selling drugs. But past mistakes won't define him or those who join his auto body repair program. 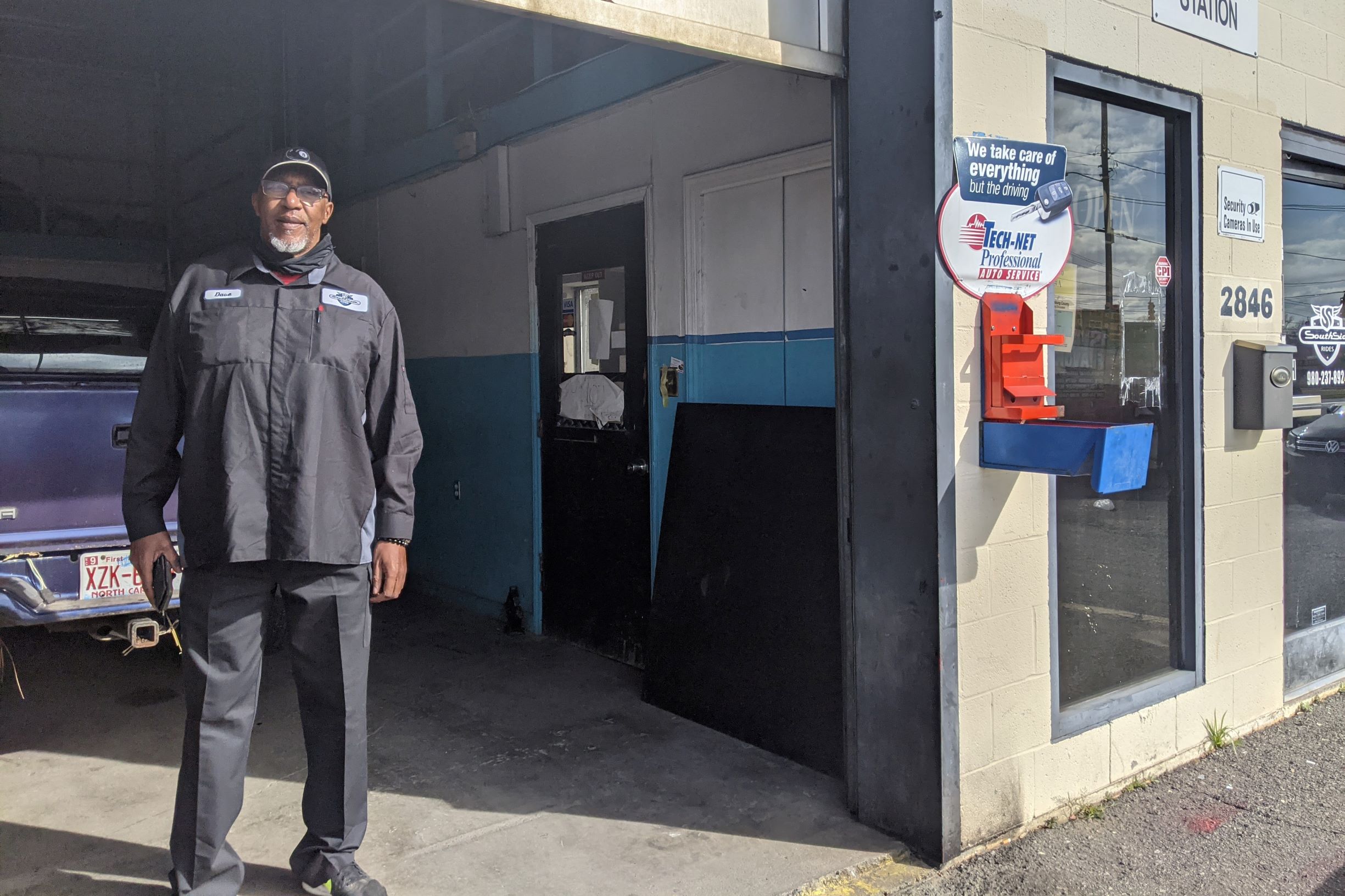 Dave Moore stands outside of his auto body repair shop on Dec. 4, 2020. He opened his second location for the Southside Rides Foundation on Freedom Drive in 2016. Photo: QCity Metro

Dave Moore isn’t reluctant to tell people about his drug-dealing past — including the three years he spent incarcerated for drug-related offenses — because he said his story could help a generation of men and women who need guidance and a second chance at life.

The 60-year-old founded the Southside Rides Foundation in 2005 to train formerly incarcerated individuals and at-risk youth in auto body repair. Moore’s “Project MOORE” (Mentoring Our Own & Rejuvenating the Environment) program teaches students self-sufficiency and entrepreneurship in the auto body industry. Originally founded in Winston-Salem in 2005, he later opened a Charlotte location in 2016 at 2846 Freedom Drive.

Reentry into society has economic barriers that often lead to recidivism. According to the NAACP’s criminal justice fact sheet, 650,000 Americans return to their communities from prison each year, with almost half of them returning to prison within a few years.

There are nearly 50,000 legal restrictions against people with arrest and conviction records that block access to jobs, housing and educational opportunities. The NAACP reported that the restrictions significantly contribute to high rates of increased interactions with the criminal justice system and the reincarceration of people who have been released from prison. The data attributes a lack of stable employment for increasing the likelihood that an individual will return to jail or prison.

To help with probation, restitution and other fees, Moore pays his students a weekly stipend ranging from $150 to $200. The amount of money each student receives depends on how they perform in the shop, he said. In the future, Moore hopes to increase the amounts to $5,000 to $10,000 awards so participants have start-up money to open their own auto body repair shops. At his last count, Moore says there have been 37 program participants who have gone on to open their own shops.

Moore previously owned Moore’s Auto Body in Winston-Salem from 1993 through 1998. His niece, Cassandra Jones, encouraged him to teach the youth and formerly incarcerated about auto body repair. But also at his shop, Moore provided “street guys” with drugs to sell around the neighborhood. In 1998, he was apprehended by the police after one of the guys delivered drugs to Jones’ house. She was detained by police. To absolve his niece, Moore says he confessed to owning the drugs. He bonded out two weeks later and didn’t get sentenced for drug possession until 2001.

While incarcerated, his niece died from sickle cell anemia. Moore, who was released in 2004, says, to this day, she inspires him to want to do better and help others avoid the mistakes he made.

“She’s my angel up there,” he told QCity Metro. “I feel like she’s right on my shoulder every day.”

Assistance from a generous CEO

Moore himself had to overcome societal barriers before establishing the Southside Rides Foundation, and Thruston Morton, founder and CEO of Global Endowment Management LP, played a large role. Morton helped Moore secure the foundation’s Charlotte location by guaranteeing the property’s lease for three years and paying the first 18 months of rent until the shop got off the ground.

The two met in 2015 when Moore participated in Social Venture Partners’ SEED20, an annual program that allows nonprofits to educate the community on pressing social issues. While in the audience, Morton said he was intrigued by Moore because he looked like the oldest participant. He sent Moore a donation the next day, which led to a face-to-face meeting.

The two men from very different backgrounds developed a friendship and eventually, Morton invested in the Southside Rides Foundation’s expansion to Charlotte. They chose the current Freedom Drive location, but at the time, Morton said the property’s landlord didn’t want to lease it to Moore because of a prior incident with an ex-felon who stole from him. The landlord would only concede if Morton guaranteed to uphold all of Moore’s responsibilities under the lease for three years. Additionally, Morton paid the $3,500 rent for a year and a half.

But upkeep was expensive, and the men nearly shut the shop down in 2017. Morton changed his mind after hearing a program participant say he would rather go back to jail than be back on the streets. Without the structure of the program, Morton said he knew the guy would return to prison.

“When I heard that, I was like…I can’t do it (close down the shop),” he said. “It wasn’t economically sensible, but I could afford it, so we just kept going.”

Although the journey has been costly, Morton said he loves Moore and would help him even if he’s just affecting the lives of two or three people. He’s often astounded by Moore’s story and commends his resiliency.

“It’s like I’m in the ring, and I’m fighting for everybody,” Moore said. “It hasn’t been easy, and I got the door slammed in my face, but I kicked it down. I’m not giving up; I’m built like that.”

Additionally, he places a heavy focus on improving his students’ reading ability as reading directions on chemicals, tools and instructions are essential for auto mechanics. He said his failures in life have shaped his curriculum and the way he teaches.

Quinton Davis, 38, was one of nine students to come from the Mecklenburg County Jail to work at the shop when it first opened its doors in 2016. While incarcerated, Davis said he decided to pursue a career in auto body repair because like Moore, he’s liked cars since he was young. He also didn’t want to get a warehouse or fast-food job once released because he said it would have gotten boring since he wouldn’t be learning anything new. With “Mr. Moore,” he said he’s learning something new every day.

“I just needed my foot in the door somehow, and somebody who was going to teach me,” Davis said. “Also, Mr. Moore knows what I’ve been through because he’s been through it himself.”

Davis was charged with several crimes at a young age and says his family grew tired of his actions. It wasn’t until he joined Project MOORE that he says his family began to see that he was trying to move on from his past. Now with children of his own, he hopes to follow in Moore’s footsteps by teaching the youth about auto body repair and opening up his own chain of shops.

“I’ve made the most mistakes, and I’m still trying to recover from them,” Davis said during an interview at the shop. “Me learning this (auto body repair) is going to make things easier going forward.”

In 2016, the United Way of Central Carolinas formed Unite Charlotte in response to the community unrest following the killing of Keith Lamont Scott. The nonprofit’s initiative funded local programs that focused on community healing, rebuilding trust and creating opportunities for the underprivileged. Southside Rides Foundation was one of the inaugural recipients. Initially, Moore received a $10,000 award and Unite Charlotte has renewed its financial commitment to Southside Rides for the past three years.

“As an agency, we wanted to be intentional about funding organizations that are really breaking that generational systematic issue that is happening,” Smith said. “Black and Brown people are typically at the bottom when it comes to opportunities to expand and grow.”

Smith said Moore’s program breaking the barrier of economic mobility and putting people back to work in itself made the United Way of the Central Carolinas want to support his endeavor.

Most recently, Southside Rides applied for money through the CARES Act to help the business financially recover from the Covid-19 pandemic. Smith said the money, which he expects to be distributed in early January, totals upward of $60,000. Morton said the money will be used to purchase a paint booth and other general expenses.