Meet the woman behind V-Spa Charlotte, who opened a second location during a pandemic

West Charlotte native Shakira McGill says there has been desperate demand during the pandemic for the spa that caters to women’s intimate parts. 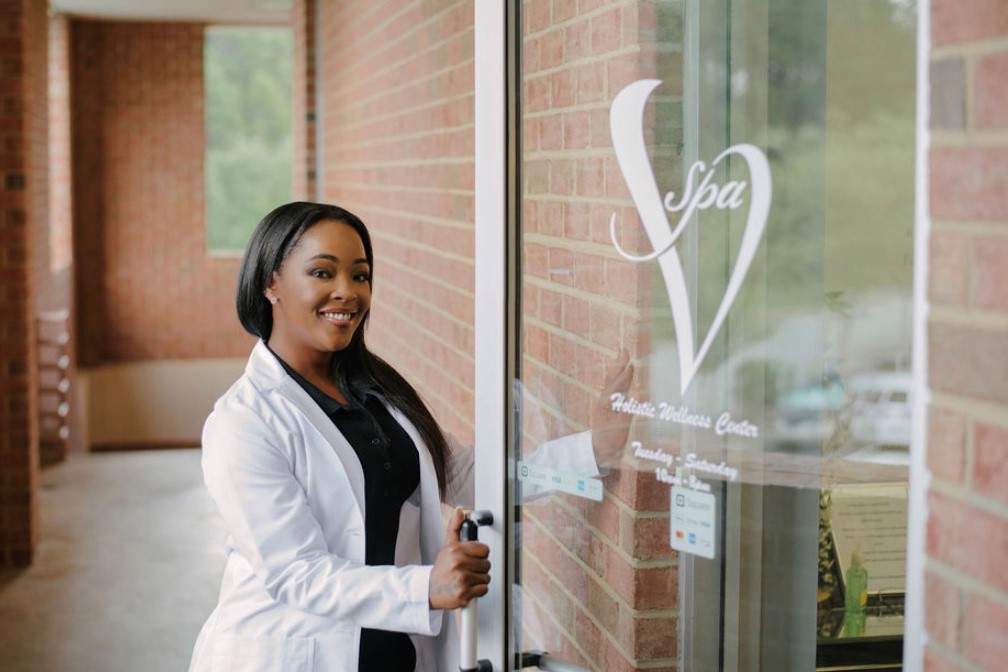 That’s how Shakira McGill described her new location for V-Spa Charlotte, her second facility that caters to women’s holistic health and wellness. It’s not lost on her that the Oct. 3 grand opening in Charlotte’s Elizabeth neighborhood came as businesses navigated uncharted territory brought on by the Covid-19 pandemic.

“There was definitely a lot of uncertainty. We were in preparation for a second location before the pandemic began,” McGill said. “With the pandemic happening, I got kind of nervous about it, but the way my faith is set up, I just went for it.”

Personal care services, including spas, reopened in late May under North Carolina’s Phase 2 plan. After first being denied, the 35-year-old was approved the second time around for funding relief through the federal CARES Act.

“I’ve always been good at saving money, so I knew how to allocate those funds and put them in proper places so we could thrive,” she said.

McGill, a west Charlotte native, first opened V-Spa Charlotte in Huntersville in 2017, focused on the holistic wellness of the female reproductive system. Its most popular offering: vaginal steaming.

Although no scientific evidence suggests that vaginal steaming helps any condition, McGill says she’s up to nearly 4,000 clients who have reported positive changes after treatments. The spa attributes its success to women who are interested in health and wellness and holistic healing, a concern that McGill says has grown during the pandemic.

“Everybody is so vagina-conscious,” she said. “There’s a desperate demand for the service. We need one on almost every corner.”

McGill says she has long been interested in natural healing. After graduating from West Charlotte High School, she studied biology at North Carolina A&T State University. Later, a personal experience put her on a path to opening V-Spa Charlotte. After undergoing a tubal ligation, McGill began to experience severe cramping.

“Everything was terrible,” she recalled. “I tried the hip bath in Houston and Atlanta, and I noticed the difference immediately. I said we have to have one of these in Charlotte.”

She earned a certification as a hydrotherapist and then as an instructor.

McGill now employs five workers between the “mothership” in Huntersville and her new location in Charlotte, offering traditional spa services such as waxing and bleaching, alongside vaginal steaming.

The renovated, 3,601-square-foot office building in Elizabeth is divided into individual spaces like the “Anita Baker suite” and relaxation rooms that include tables equipped with USB ports and chargers (for those who don’t want to completely unplug). Ladies can grab six of their girlfriends and make it a socially distanced outing complete with a beautiful tablescape.

Book a visit or learn more about V-Spa Charlotte at vspacharlotte.com. The Charlotte facility is located at 1500 E. 4th St., or check out the Huntersville facility at 15905 Brookway Dr., Suite 4202.