A love story, a Black-owned deli, and a green space perfect for an autumn stroll

Meet Andrew and Lisa Drayton, owners of the Bedder Bedder & Moore Delicatessen; then take a relaxing walk along the Little Sugar Creek Greenway. 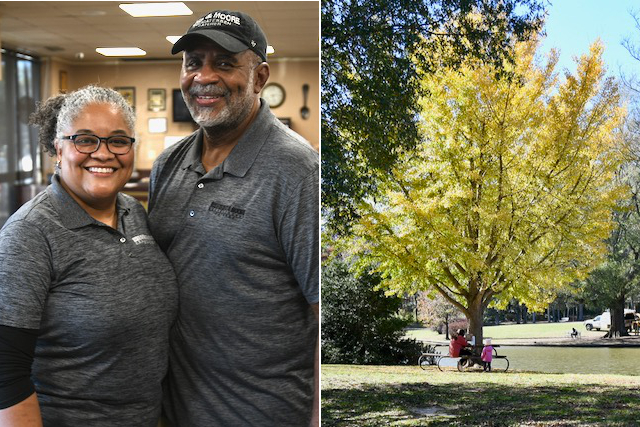 Ask Andrew and Lisa Drayton what distinguishes the Bedder Bedder & Moore delicatessen they own, and they speak of their commitment to customer service.

“I think it’s the willingness to go above and beyond to take care of the people that walk through that door,” says Andrew Drayton, co-owner with his wife, Lisa. “We take pride in the product that we present to people.”

Since buying the restaurant two years ago, the couple have worked side-by-side, five days a week, doing what it takes to keep a food business growing, even during a pandemic that has cut deeply into their lunchtime sales.

The Draytons describe themselves as partners in the truest sense of the word — hands-on owners who discuss business challenges before moving ahead as a team. They also are deeply involved in the daily food preparation.

Bedder Bedder & Moore is known for its sandwiches — burgers, New York Ruebens and Philadelphia-style cheesesteaks. It’s also known for giving away a free cup of soup with each takeout order, a practice the couple started before the pandemic to reward dine-in customers.

Another top seller is the Montfort Special – a sandwich named after the south Charlotte neighborhood of Montfort Park, where they once owned a second location. (They closed the Montfort Park location to focus on the busier Tryon Street restaurant.)

Editor’s Pick: the banana pudding is among the best in the city.

With indoor seating at 50% capacity because of the pandemic, take-out and delivery have grown rapidly.

“We don’t use third-party delivery services,” Lisa Drayton said. “We take pride in that. We’re not passing the food off to just anybody.”

In the early days of Covid-19, the couple saw catering clients cancel en masse. Much of that business had come from the Uptown office towers, which were shut down quickly to slow community spread.

“That affected us deeply,” Linda said, “and so our people just started learning to cross-train. Our drivers learned how to answer the phone and take orders on the phone, and we just started rotating people’s hours to keep as many as we could actively on the schedule.”

Andrew and Lisa met at the Charlotte airport, where they once managed separate restaurants that were owned by the same company. (It was Andrew who asked for that first date.) They eventually got married and bought Bedder Bedder & Moore from John and Debbie Thalmann, who were looking to retire. (John Thalmann died in 2019.)

The couple knew early on in their relationship that they wanted their own business. Lisa, who holds the title of general manager, is in charge of daily operations; Andrew is president.

“You got to a point where, if you’re going to be held accountable for things, I’d rather it be for something we own,” he said.  At the end of the day, we’re both the ones making decisions. It’s just a good feeling to be your own boss.”

With health experts suggesting (strongly) that we all avoid family gatherings this holiday season, the Little Sugar Creek Greenway is an outdoor space that calls to be explored.

It’s also a great destination to takeOUTside. Stops along the greenway offer numerous places to find a quiet bench, table or picnic spot.

The most popular stretch along the greenway runs from the Midtown area to Freedom Park, but there’s so much more. The trail continues south for many more miles.

According to the county’s website, when the greenway is completed, it will cover more than 19 miles in all, running from Toby Creek Greenway on North Tryon Street all the way to the South Carolina state line. In between, it will link destinations such as Central Piedmont Community College, Park Road Shopping Center and the Carolina Place mall.

Park & Recreation officials divide the greenway into five sections, each with its own characteristics and parking locations for easy access:

As it winds its way along Little Sugar Creek, the greenway is an excellent destination for lovers of urban nature. It’s not uncommon to see ducks, blue herons, small fish and tadpoles, water turtles, deer, and even on occasion, (nonvenomous) water snakes.

Toward the southernmost end of the greenway lies Huntingtown Farms Park. At 23 acres, it’s much smaller than Freedom Park, but it’s still a great destination with good amenities, including a basketball court, a covered shelter, and a playground for children. During the summer months, the park features a community garden.

Away from uptown, this is where the greenway opens up to wide expanses, an open sky, and the creekside becomes more accessible.