JPMorgan Chase & Co. will anchor the property once home to the original McDonald’s Cafeteria at the corner of Beatties Ford Road and LaSalle Street. 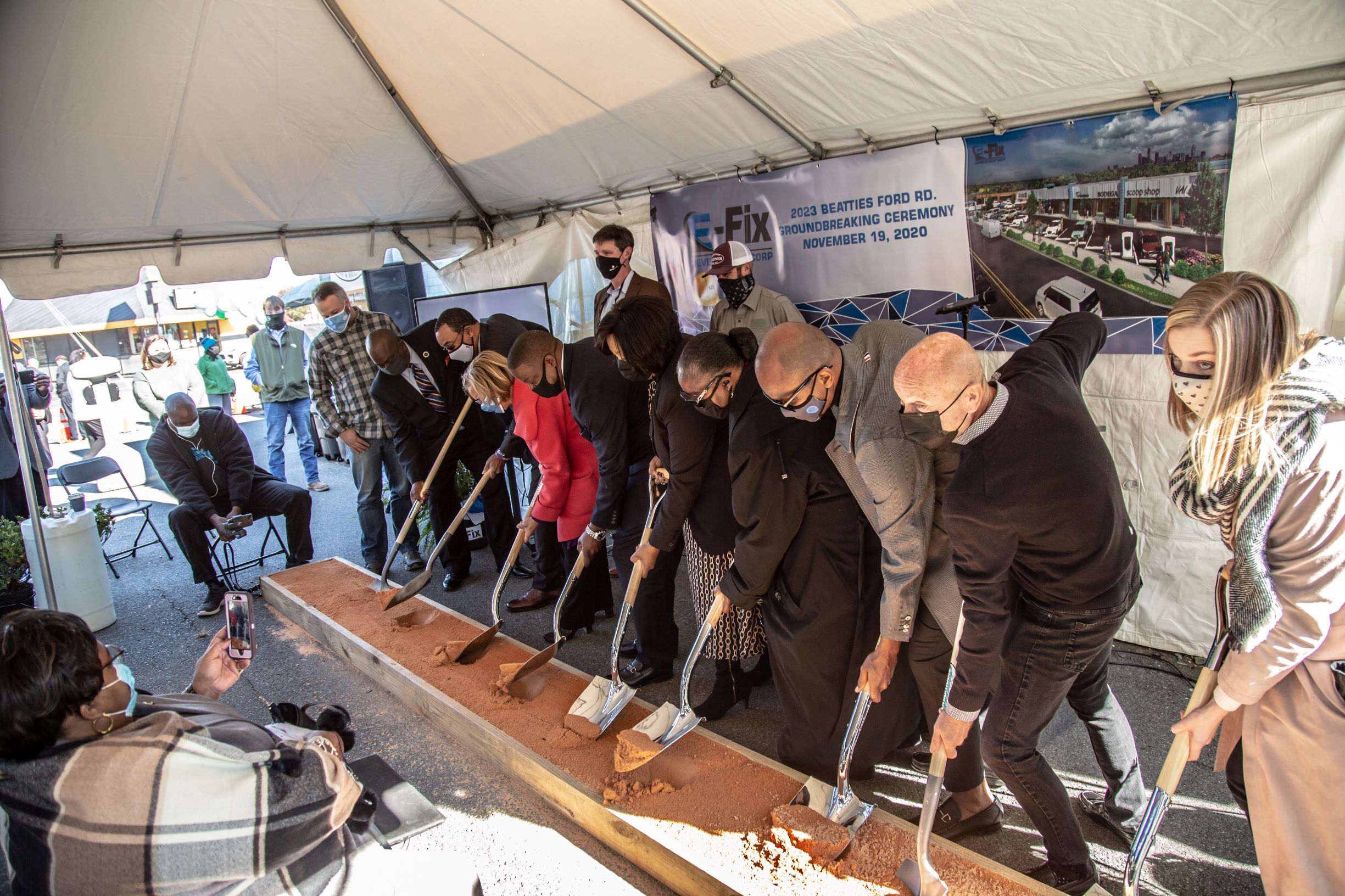 Kisha Poage sat in the audience Thursday morning as city leaders stood behind a podium to praise a redevelopment project coming to the corner of Beatties Ford Road and LaSalle Street.

Poage intimately knows the property at 2023 Beatties Ford Road. The site was the original location of McDonald’s Cafeteria, a west Charlotte institution for more than 30 years. Poage’s grandfather, John McDonald, opened the food spot in 1971, and it quickly became a popular gathering place for community members.

“It means a lot to our family because my grandfather built this building and put the cafeteria in the very front after my grandmother passed away,” she said.

So on a chilly Thursday under clear skies, Poage watched as city officials, community members and business leaders celebrated the groundbreaking of the revitalization project.

A new JPMorgan Chase Bank will anchor the redevelopment of the aging shopping complex in Historic West End, part of a larger plan by the city of Charlotte to improve the Beatties Ford Road corridor. E-Fix Development Corp. acquired the 7,968-square-foot building that will include space for up to four commercial tenants, according to Christopher Dennis, the company’s president and CEO. He says the goal is to attract businesses that offer the kinds of products and services that residents have desired, which could include healthy food options and neighborhood services.

The project falls under the city’s Corridors of Opportunity initiative, a $24.5 million investment focusing on six corridors throughout Charlotte, many of which have been historically neglected by business and city leaders. Beatties Ford Road is the first of those corridors to launch a major redevelopment initiative.

Dennis said the journey began in early 2019 after connecting with J’Tanya Adams of Historic West End Partners. Adams said it was a “simple phone call” that also included Huey Rowe-Anderson, who bought the property in 1997 with his wife, Virginia, according to property records.

“There could be a lot accomplished with a simple ‘yes’ and some perseverance,” Adams said. “The more we come together and connect, great things like this can happen.”

City Council member Malcolm Graham, whose district includes the Beatties Ford corridor, said a core principle behind revitalization along the corridor is that residents “are part of the change and not victims of it.”

In recent months, several notable developments in the area have seen Black business owners investing in properties along the corridor. There’s William Hughes of CGE Venture Group, who is bringing a three-story, mixed-use development to the corner of Beatties Ford Road and Booker Avenue in the Washington Heights neighborhood. Up the street in the Five Points area, near the intersection of Rozzelles Ferry Road and West Trade Street, Dianna Ward is redeveloping a commercial building where all of the initial tenants are business owners of color.

[Related: Change Agents: In the shadow of JCSU, Dianna Ward is creating a new retail environment]

Dennis says his group wants to foster job creation by bringing businesses that can support the growth of the community and resources that enhance the community’s vision for the corridor.

Janey Tate contributed to this story.