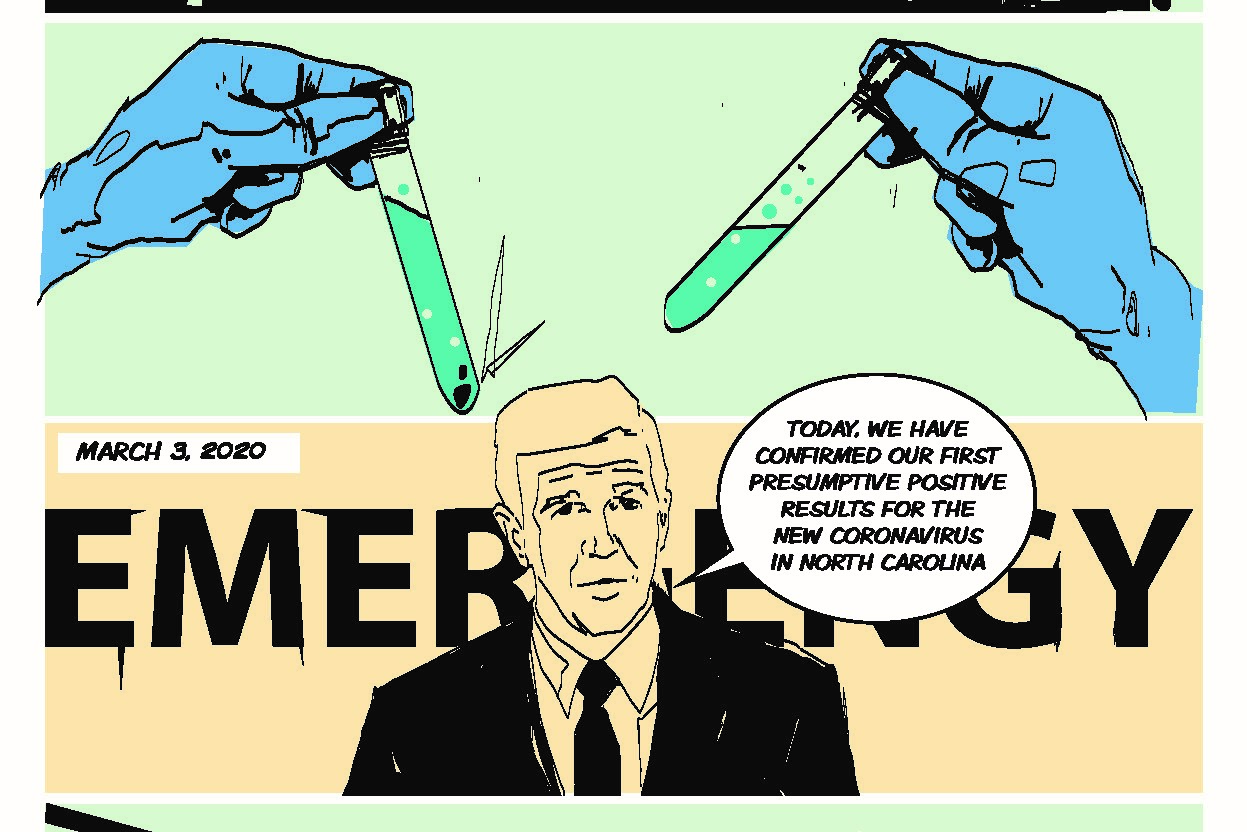 Introduction chapter of "The Pandemic: Stories of Covid-19." Artwork by Marcus Kiser

The Covid-19 pandemic influenced so many stories from various news outlets around Charlotte that the Charlotte Journalism Collaborative and BOOM Charlotte have partnered to create an eight-chapter graphic novel titled “The Pandemic: Stories of Covid-19.”

Each chapter pairs a local journalist with a local artist to illustrate comic book panels based on previously reported Covid-19 stories. A new chapter of the graphic novel will be released every two weeks before concluding in February. So far, the group has released its introduction and the first chapter, which retells the story of Covid-survivor Cedric Meekins and how contract tracing helped pinpoint the origins of how he contracted the disease.

“Covid-19 is affecting the lives of everyone,” says Chris Rudisill, director of the Charlotte Journalism Collaborative. “This creates an opportunity to translate local news reporting and scientific information in a new and dynamic way that will reach audiences who are typically not regular news readers or viewers.”

According to Johns Hopkins University, there are currently more than 10.4 million cases of Covid-19 reported in the U.S. With nearly 300,000 in North Carolina, the highest rate of infection is in Mecklenburg County.

Rudisill approached artist and BOOM Charlotte board member Marcus Kiser about leading the artwork for the project. When the idea for the graphic novel materialized, Manoj Kesavan, founder and executive director of BOOM Charlotte, said it felt in the spirit of the nonprofit’s way of giving artists opportunities to respond to significant events happening around the world.

He also liked the idea of Kiser leading the inclusive group of artists. Kesavan said it showcases a diverse part of the local art scene that usually isn’t represented. Some of the artists were selected to work on the graphic novel after viewing their art in the “ACT:NOW” series, which allowed artists to respond to the police killing of George Floyd in Minneapolis. Others collaborated on the Black Lives Matter mural that currently adorns a block of Tryon Street in uptown Charlotte.

While inclusion and diversity partly influenced Kiser to join the project, he said the graphic novel initially interested him because it had been a while since he worked on an actual printed comic book.

“I wanted to test my skill set again and play around with some new styles and mediums,” said the longtime Charlotte-based designer and illustrator. “I can’t say that I was sitting around like ‘hey, I can’t wait until I get a Covid story.’ So far, it has been interesting and fun.”

Although he hadn’t worked on a comic book in a while, Kiser said comics do inspire a lot of his work. Readers may recognize his work on “Intergalactic Soul” and “LHAXX,” projects he worked on with fellow artist Jason Woodberry.

Both Kiser and Kesavan said BOOM Charlotte nor any organization has done a graphic novel project like this before.

“This is a chance for Charlotte to enter that scene,” Kesavan said. “We feel like a lot of good things could come out of this.”

Visit the Charlotte Journalism Collaborative website to read additional chapters of “The Pandemic: Stories of Covid-19.”

The Charlotte Journalism Collaborative is an initiative launched by the Solutions Journalism Network, with support from the Knight Foundation, is comprised of six major media companies and other local institutions — including QCity Metro, The Charlotte Observer, La Noticia, QNotes, WCNC-TV, WFAE 90.7 FM, the James L. Knight School of Communication at Queens University of Charlotte, the Charlotte Mecklenburg Library and Free Press. See all of our reporting at charlottejournalism.org.