Charlotte-Mecklenburg police are looking for two men seen firing guns in a video from the June 22 shooting along Beatties Ford Road. 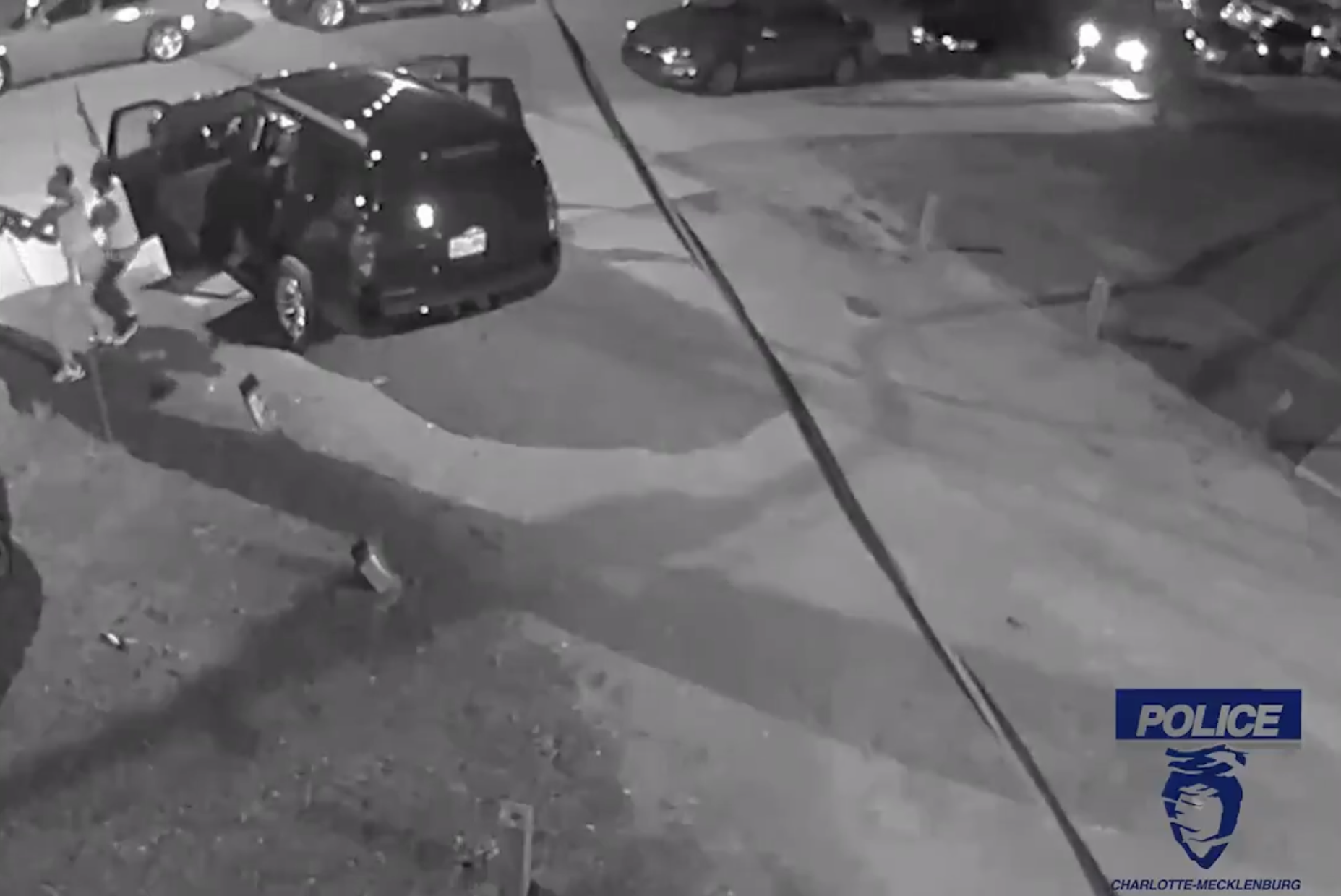 The Charlotte-Mecklenburg Police Department released a one-minute video clip Friday morning in connection with the June 22 shooting that left four people dead along Beatties Ford Road. In the video, two men are seen shooting in retaliation to nearby gunfire by discharging their weapons out of and around a parked black SUV while multiple pedestrians run for cover.

During a press briefing Friday, CMPD Chief Johnny Jennings said it’s a miracle that the shooting didn’t claim more lives because the video depicted “a total disregard and recklessness for human life.” The shooting occurred at a block party during Juneteenth weekend that CMPD estimates had more than 400 people in attendance.

While Jennings said detectives put thousands of hours into solving this case, CMPD still needs the community’s assistance in identifying the two shooters seen in the video.

“The Beatties Ford Road corridor is a priority for the city and the county,” Jennings said. “I can assure you that we’re going to move heaven and earth to get this case resolved.”

CMPD hasn’t made any arrests in connection to the case, but Lt. Bryan Crum said 10 guns have been linked to the shootings, and detectives have recovered some of the firearms by using the National Integrative Ballistic Information Network (NIBIN). Crum said NIBIN is a database that’s able to compare fired evidence from one crime scene to another.

“Anytime somebody fires a gun, that gun leaves distinguishing characteristics on both the casing and the projectile,” Crum explained. “Basically, like a fingerprint.”

The Bureau of Alcohol, Tobacco, Firearms and Explosives (ATF) has worked with CMPD to leverage resources, including NIBIN, to assist in solving the case. ATF Group Supervisor Anthony Spotswood announced at the press briefing that the federal law enforcement organization would be raising the $10,000 reward they offered months ago to $15,000, which would make the total reward for valuable information on the case $22,000.

“We know that day started out as a peaceful celebration, and unfortunately, a small number of violent offenders turned that celebration into a tragedy,” Spotswood said. “If you know anything, no matter how small, give them [Crime Stoppers] a call.”

CMPD spokesperson Rob Tufano chimed in and called the video clip “flat out jarring and incomprehensible.”

Dairyon Stevenson, a 31-year-old father of three and certified chef, is a victim of the Juneteenth block party shooting. His father, Kenneth, sat in the media room as Crum and Jennings offered developments into the case of his son’s murder. The other victims were 28-year-old Christopher “CJ” Gleaton, 29-year-old Kelly Miller and 39-year-old Jamaa Keon Cassell. Ten other victims also sustained injuries from bullets or cars at the scene, CMPD reported.

Crum said he and other detectives would like to be able to give Kenneth and other family members of the four victims answers, but they can’t unless they have cooperation from the community.

“It’s really important that we have people give us context to that physical evidence,” Crum said. “We need to find out what’s going on [in the video], which is why there haven’t been any charges.”

The video clip in question can be seen on CMPD’s social media and the department’s website.

Anyone with information about the June 22 shooting is asked to call Crime Stoppers at 704-334-1600 or go online to charlottecrimestoppers.com to leave a tip.