The Concord eatery is part of the growing number of businesses backed by Historic West End Partners. 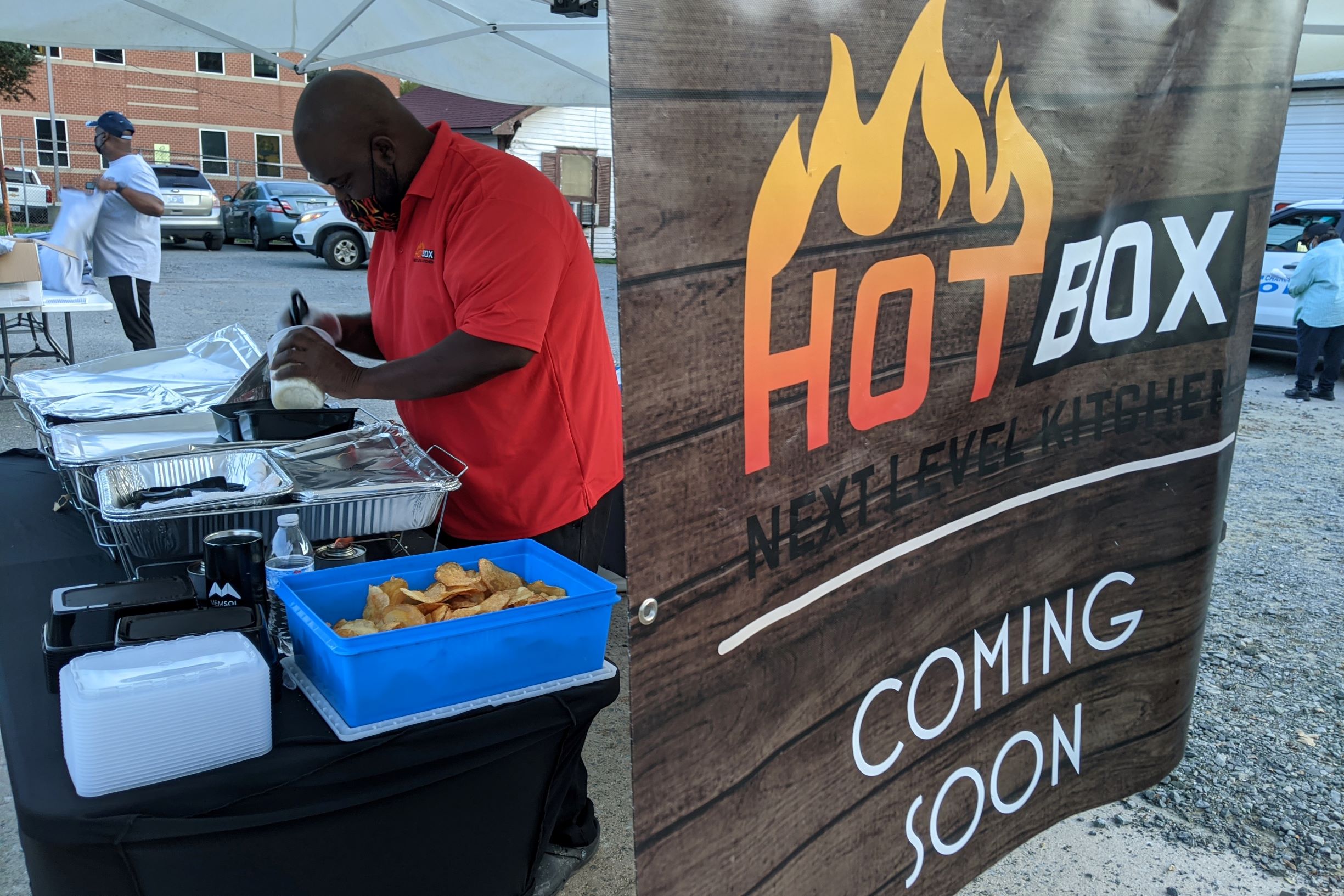 Chef Michael Bowling in one of his first tastings after announcing that HotBox Next Level Kitchen will expand to the Historic West End. Photo: QCity Metro

Chef Michael Bowling has long wanted to open a restaurant in west Charlotte. He’s one step closer now that his Concord concept, HotBox Next Level Kitchen, will expand to Five Points in Historic West End early next year.

Bowling will launch in January as a catering food truck while he works with Historic West End Partners to find a permanent location. His goal is to help alleviate the food desert and increase food security on the west side of town.

Nearly 15% of Mecklenburg households are experiencing food insecurity — reduced quality and variety of food or reduced and disrupted eating patterns — according to data from the U.S. Department of Agriculture. Mecklenburg’s rate is higher than the state (13.9%) and the U.S. (11.1%) percentages.

Historic West End falls within a group of Mecklenburg zip codes — 28205, 28206, 28208, 28212, 28216, 28217 — designated as a Public Health Priority Area by the local health department. County health officials have linked the zip codes with higher rates of chronic diseases due to factors like lack of access to nutritious foods and safe places to exercise.

“Even though that area is going through major change, major grocers don’t want to come over there, which is a problem,” Bowling said. “We’re going to create jobs and hire people that live within the area because unemployment is still really high. If we can do something to help the community financially, we’re going to.”

Like many ventures launching in the area, Bowling’s opportunity came after a conversation with J’Tanya Adams, president of Historic West End Partners. She oversees the organization advocating for economic and cultural development along the Beatties Ford Road corridor. She has been called a “powerhouse,” a community force determined to make things happen along the corridor.

For business owners willing to be part of the community and hit the ground running, Adams says the partners will find something that works.

“It is a matter of people reaching out to us that want to be here, and have some resources, whether they’re willing to be here in a pop-up capacity, a micro-retail capacity or a storefront capacity,” she said.

[Related: In the shadow of JCSU, Dianna Ward is creating a new retail environment]

Becoming part of the community

Bowling has long wanted a presence in Historic West End. His sister and business partner, Joy, lives in the neighborhood. He roomed with her for a while after his divorce. He loved the community but couldn’t find affordable space to open up shop. Eventually, Bowling landed a location in downtown Concord.

Over the summer, Adams called him about setting up a long-term food truck in Five Points — the area near the intersection of Beatties Ford Road and West Fifth Street. It’s his latest effort to kickstart a food truck after a three-year run of HotBox Next Level Street Food, which shut down in 2017.

“He’s desired to open a place in the West End, and, of course, the real estate went through the roof before he could obtain a space,” Adams said. “It’s such a shame that he lived in the community, and people didn’t get a chance to experience him.”

Adams encouraged the chef to apply for the Center City Small Business Innovation Fund, an initiative to help small businesses impacted by the Covid-19 pandemic and the economic downturn. Bowling received a $40,000 grant funded by the Knight Foundation, Honeywell, Duke Energy and Bank of America.

Most of the money went toward the 20-foot food truck he found in Atlanta that will be decked out “with all the equipment we could possibly want,” Bowling said. He expects the truck to be completed by the end of the year, in time to soft launch in January before rolling out full service in February.

Bowling will continue managing the flagship location of HotBox Next Level Kitchen, which he opened last year inside the taproom of Concord’s Southern Strain Brewery. In August, HotBox won $25,000 from Discover’s Eat It Forward Program, aimed to help Black-owned restaurants impacted by the coronavirus pandemic. Part of the winnings helped pay down debt accumulated during the pandemic and to employees who took pay cuts and fewer hours. He also donated to Heal Charlotte’s fundraising campaign to turn the Baymont Inn off of Sugar Creek Road into a transitional housing campus.

Most important, Bowling says both awards stressed the importance of a rainy-day fund. In September, sales at HotBox were still down 60% from where they were pre-Covid, but he said they were making enough money to pay the bills.

“It’s very important that we have a cushion because of the whole pandemic situation. In case of another emergency, we’re not closing without money in the bank,” he said.

With the Charlotte operation underway, Bowling says he’ll add a new hire responsible for prepping food for both locations. Looking down the road, he plans to operate the westside food truck for a year and then open his first standalone restaurant. He talked about offering a summer program to give away bag lunches to neighborhood kids.