Opinion | Democracy is in peril. But it’s not too late to turn the tide.

Our democracy has never progressed in a straight line; it has zig-zagged forward. 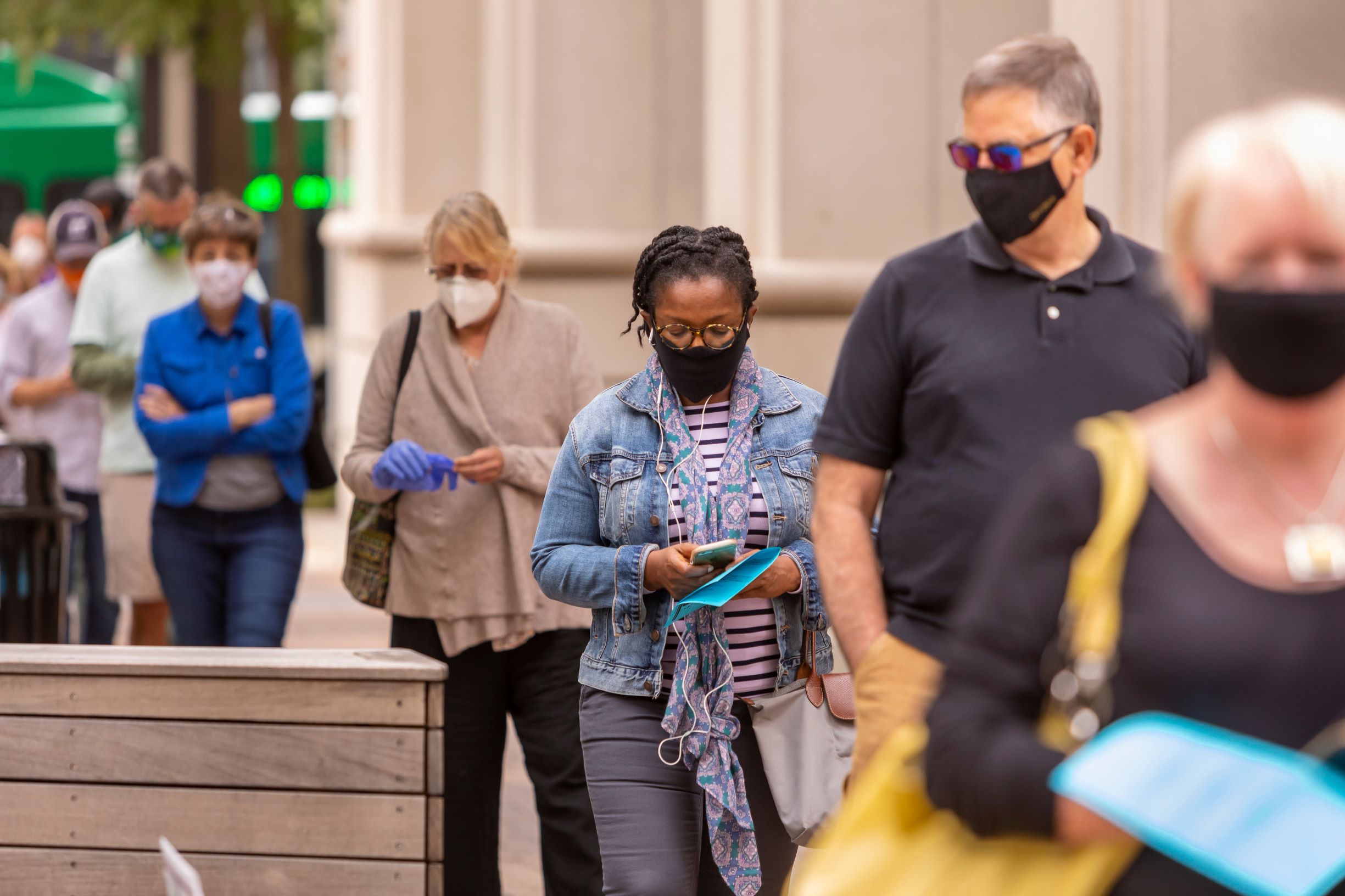 People line up during early voting for the 2020 general election. Photo: Rob Crandall

This article was originally published by the Center for Public Integrity, a nonprofit newsroom based in Washington, D.C.

Early Wednesday morning, Americans went to bed in the middle of a political cliffhanger. The main character in peril is our democracy.

This summer, we grappled with a racial justice reckoning. Now, we’re reckoning with our democracy, though the issues are really inseparable.

Days before the election, 80 experts on authoritarianism and political extremism published a warning letter about the frailty of democracy worldwide.

“Regardless of the outcome of the United States’ election, democracy as we know it is already imperiled,” they write. “However, it is not too late to turn the tide.”

Historically, economic, political and social disruptions such as the pressures of globalization, the scholars say, create the conditions for people to seek refuge in “a figure of arrogant strength.” These strong leaders spin a narrative of national greatness that depends on silencing “others.” And they turn political adversaries into enemies of the state and foment political violence.

President Donald Trump’s bromance with White supremacists and prosecution of hundreds of people who participated in anti-police violence and racial justice protests this summer fit the scholars’ playbook for authoritarianism. But Trump isn’t the lone architect of our democracy’s malaise, though he smelled the opportunity for power and is accelerating its decline.

In four years, we’ve witnessed the volatility of our democracy, from the fissures in the government’s system of checks and balances to the casualness with which our fellow citizens and lawmakers abandon once-settled democratic values — like the right to vote and have that vote counted. In the weeks leading up to the election, we’ve also witnessed a resurgent democracy. Americans voted in record-shattering numbers despite a pandemic, intimidation, lawsuits and voter suppression reminiscent of a past some thought we had overcome.

Our democracy has never progressed in a straight line; it has zig-zagged forward. Since the founding of this country, it has been pushed and prodded and litigated and legislated to stretch its constitutional promise beyond the forefathers’ imagination and desire. Each step forward required scaling the walls of privilege and power and risking lives and livelihoods to expand democracy from the few to the many.

Dethroning Whiteness as a prerequisite to voting was one of many obstacles to enfranchising the many. As historian Alexander Keyssar noted in “The Right to Vote: The Contested History of Democracy in the United States,” even when the vote was won, “backsliding and sideslipping” were constants. Native Americans were granted citizenship in 1924, but some states used their constitutions to create barriers to voting for decades – and schemes to block them from the ballot continue. Until the 1950s, a New Mexico law disenfranchised Native Americans because they didn’t pay taxes on their property. Never mind that Whites who didn’t pay taxes could vote.

Slavery and the origins of the Electoral College, the electors who actually determine who will be president, are intricately bound. In his new book, “Why Do We Still Have the Electoral College,” Keyssar recreates the debates at the Constitutional Convention that birthed the body that centuries later gave Trump the presidency in 2016, though he lost the popular vote. Convention participants were torn between the practical challenges of holding a national election and the political balancing act between the needs of states small and large, free and slave.

In the march from being property to becoming citizens, Black people have carried the conscience and the progress of this democracy on our backs like bales of cotton. The descendants of enslaved people took the hand off the plow to reach for power — from the first civil rights act in 1866, which declared that all men born in the United States regardless of race, color and past slavery or service were citizens, to the 1965 Voting Rights Act, which prevents racial discrimination in voting. Black freedom dreams have pushed the boundaries of political participation, benefitting all Americans.

Those 80 scholars who warned us this week about declining democracy also offered some prescriptions. Defend pluralism. Defend freedom of the press and safeguard critical thinking based on evidence. Defend the integrity of the electoral process. And confront global inequality, which drowns our voices under a sea of money.

Over more than 200 years, the Constitution has become a mirror in which millions of people who weren’t in the original narrative of the document have come to see themselves as “We the People.” Many of the people who fought to vote in Tuesday’s election weren’t considered human beings, let alone citizens, by the founders. Yet they too claim those words of freedom and are holding the nation and its leaders to them.

Susan Smith Richardson is CEO of the Center for Public Integrity, a nonprofit nonpartisan newsroom that reports on race, power and privilege.