Prior to that arrest, the North Carolina State Board of Elections had reported no significant incidents. 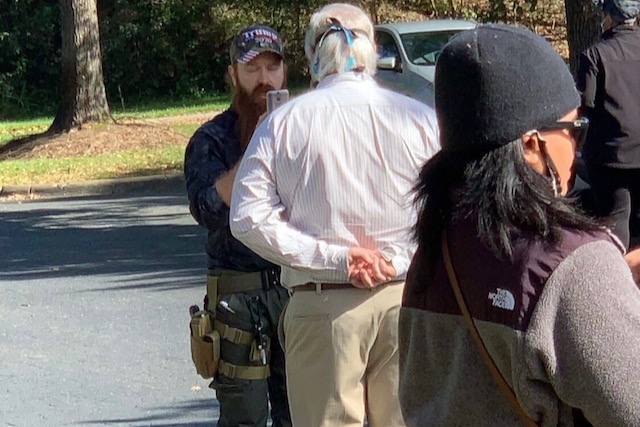 A man carrying a gun was arrested on Election Day outside a polling site in Charlotte’s University City neighborhood, according to Charlotte-Mecklenburg police — a rare incident on a day largely marked by events-free voting.

The Charlotte-Mecklenburg Police Department identified the man as 36-year-old Justin Dunn. He was charged with 2nd-degree trespassing.

Law enforcement agencies nationwide had express concern over the potential for violence following a summer of racial and political unrest. In recent weeks, President Donald Trump, had repeatedly raised unsubstantiated claims of voter fraud and encouraged his supporters to keep watch at polling sites in major cities, where Democrats and people of color are more likely to vote.

Despite those concerns, the North Carolina State Board of Elections had reported no significant incidents prior to the arrest outside the University City precinct.

Dunn was arrested shortly after 12:40 p.m. when police were called, for the second time, to the polling site for Precinct 202, located at 604 Doug Mayes Place. Hours earlier, police had gone to the same polling site to assist a poll worker who had asked Dunn to leave the premises.

According to CMPD, Dunn, armed a legal gun that was not concealed, had earlier voted at the site then went outside and began to loiter. Photos taken at the scene showed Dunn wearing a Trump hat and carrying a holstered gun.

Jabari Spruill, a volunteer poll worker at the site, said Charlotte Mayor Vi Lyles and U.S. Rep. Alma Adams had just left the site, where they had spoken with reporters.

“You see all those things in the news,” Spruill said. “I didn’t think it was going to happen here, but it did,”

The CMPD statement said a precinct official was concerned that Dunn’s presence may have been intimidating to some voters.

“The Charlotte-Mecklenburg Police Department is committed to protecting the right of our community members to engage in safe, secure and unimpeded access to voting sites,” the department said in a statement.

According to the website BallotPedia, a Republican candidate in Charlotte also named Justin Dunn ran for public office in 2015 and 2016. He lost both races.

On Monday, the Department of Justice announced that Mecklenburg County was one of 44 jurisdictions in 18 states where its civil rights division personnel would be deployed to monitor for compliance with the federal voting rights laws. The division has regularly monitored elections around the country every year since the passage of the Voting Rights Act in 1965, according to a DOJ press release.

Meanwhile, Bishop Claude Alexander of The Park Church was traveling around the county in an effort to ensure that voters could cast ballots free of intimidation.

Alexander serves with the Rev. Ben Boswell, senior pastor at Myers Park Baptist Church, as North Carolina co-chairs of Lawyers & Collars. The national initiative focuses on nine battleground states to provide voter education and protection. Clergy and attorneys are paired together at key polling sites to discourage and respond to voter intimidation.

Alexander said he had not seen any acts of intimidation but had heard of instances during early voting where people were turned away or given misinformation.