From prison to restaurant owners, men behind Renaldo’s Culinary Experience open up about their journey

Chef Renaldo Norris and Mario Recinos opened Renaldo’s Culinary Experience four years ago to show former offenders that they have a second chance at life. 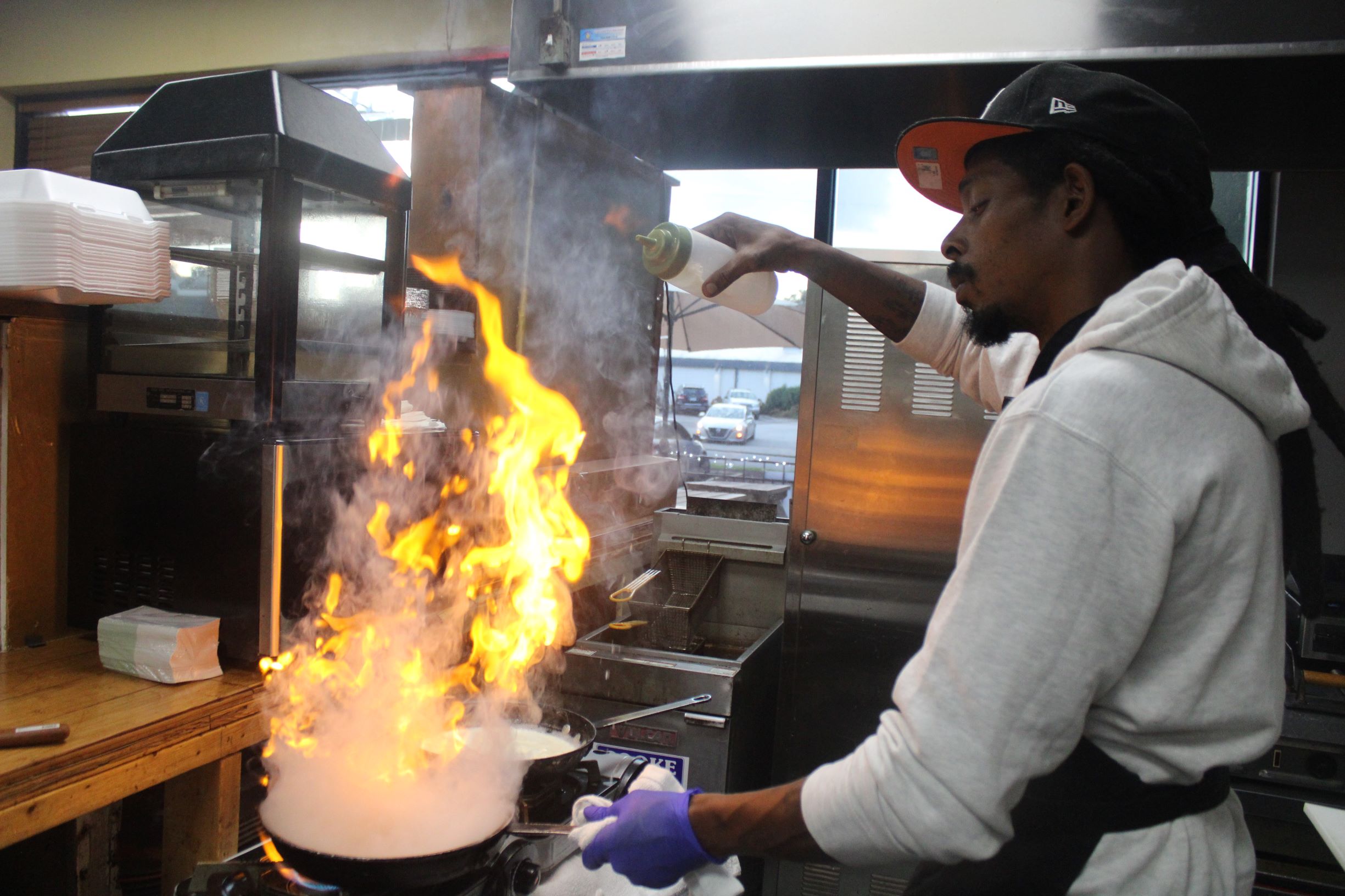 Both men served time in prison and experienced struggles once they were released. Norris served four years at age 25, and Recinos served one year for a felony he committed at age 15. Fast-forward more than a decade later, Norris and Recinos are now co-owners of an experimental restaurant that’s transitioning to Charlotte’s Elizabeth neighborhood after four successful years in Gastonia’s Eastridge Mall. Norris does the cooking while Recinos handles the marketing, accounting and other business behind the scenes.

“We both have those flags,” Norris referenced about their criminal past. “Us linking together can prove that you can get your second chance and keep going. Don’t let that one thing define who you are for the rest of your life.”

Before his arrest, Norris had earned two college degrees from Livingstone College, one in culinary arts and another in elementary education. He knew what he wanted to do six months before he was released from prison. He worked on himself inside so he could reenter the world a changed man.

Once released, he attended the now-closed Art Institute of Charlotte for culinary school. He then worked under chef Rocco Whalen at Fahrenheit Charlotte and chef Rob Masone, owner of Kre8 Xperiences.

Being a minority in America’s prison system

The racial and ethnic disparity in America’s prison system is apparent with African Americans and Hispanics representing 56% of the nation’s incarcerated population, according to the NAACP’s criminal justice fact sheet. Both racial groups only represent 32% of the total U.S. population, the fact sheet noted.

Both men were first-time offenders at the time of their arrests. They believe race played a role in their prison sentencing and criminal cases.

Recidivism is also an issue for returning citizens since nearly one out of every three individuals released from U.S. prisons are re-arrested within three years, according to a 2018 special report from the U.S. Department of Justice.

Henry Rock, founder and executive director of City Startup Labs, told QCity Metro in August that he believed most returning citizens simply needed a chance to turn over a new leaf.

Last month, GreenLight Fund Charlotte announced that its second investment was an expansion of the Center for Employment Opportunities (CEO) into the Queen City. The New York-based organization provides job training, job placement and retention services to people coming home from prison through its reentry jobs program.

Learning from past mistakes and offering a helping hand

Norris and Recinos agreed that their time in prison helped them focus and prepare for future aspirations. Norris credited his prison term for helping him become a better man since it provided him ample time to think about his next move. Because of a wrong decision at 15, Recinos said his job opportunities were limited into his adulthood. The only industry he felt would accept him was the restaurant business.

“We had the right set of skills, but we just had it in the wrong place,” Recinos said. “If I didn’t make those bad decisions, then I wouldn’t be in the position I am now.”

Norris and Recinos hope to offer jobs to other minority former offenders who are passionate about food.

“Why wouldn’t we want to give them the shot?” Norris said. “As long as they want a career, and not a job, then I don’t mind. I’ll hire an alien.”

He doesn’t mind training and working with former offenders because they are part of the community, whether people want to hold their past against them or not. Norris wishes someone would have mentored him upon his release because it could have helped him sooner rather than later.

“Help the next man; it all comes back to you,” he said. “You got to feel good either way because you did your part by offering a hand.”

Looking toward the future

Both men are looking toward the future with their families.

Norris’ 19-year-old son and 16-year-old daughter work alongside their father in the food business. Recinos’ 5-year-old daughter, Aubriana, may work at the restaurant one day, but right now, he’s just happy to have her home.

Last summer, there was a multi-state search for Aubriana after her mother violated a custody order. Police in Dallas, Texas, found the little girl in a house that the FBI was investigating as a possible human trafficking ring. Recinos and Aubriana reunited last August, and now his goal is to give her what he didn’t have growing up — ownership.

“His (Norris’) and my kids have the choice to be owners,” Recinos said. “They can either own this or do what they love. At the end of the day, this is what we love.”

While Renaldo’s Culinary Experience is serving food, Norris and Recinos said the restaurant’s grand opening won’t be until Nov. 18, at the earliest. The owners want to do more remodeling before they officially open.

Renaldo’s Culinary Experience is also participating in the fourth year of Charlotte Black Restaurant Week, which runs through Oct. 31.

Black Business Owners of Charlotte, the event’s organizer, reached out to Recinos after spotting a plate of food that he posted on the restaurant’s social media pages. From that point, he sent BBOC all the information they needed and Renaldo’s Culinary Experience was on a flyer within an hour.

“That was major,” Norris said.

This Story is Tagged: Food