‘Charlotte Listens’: A storytelling pop-up adapted for the pandemic 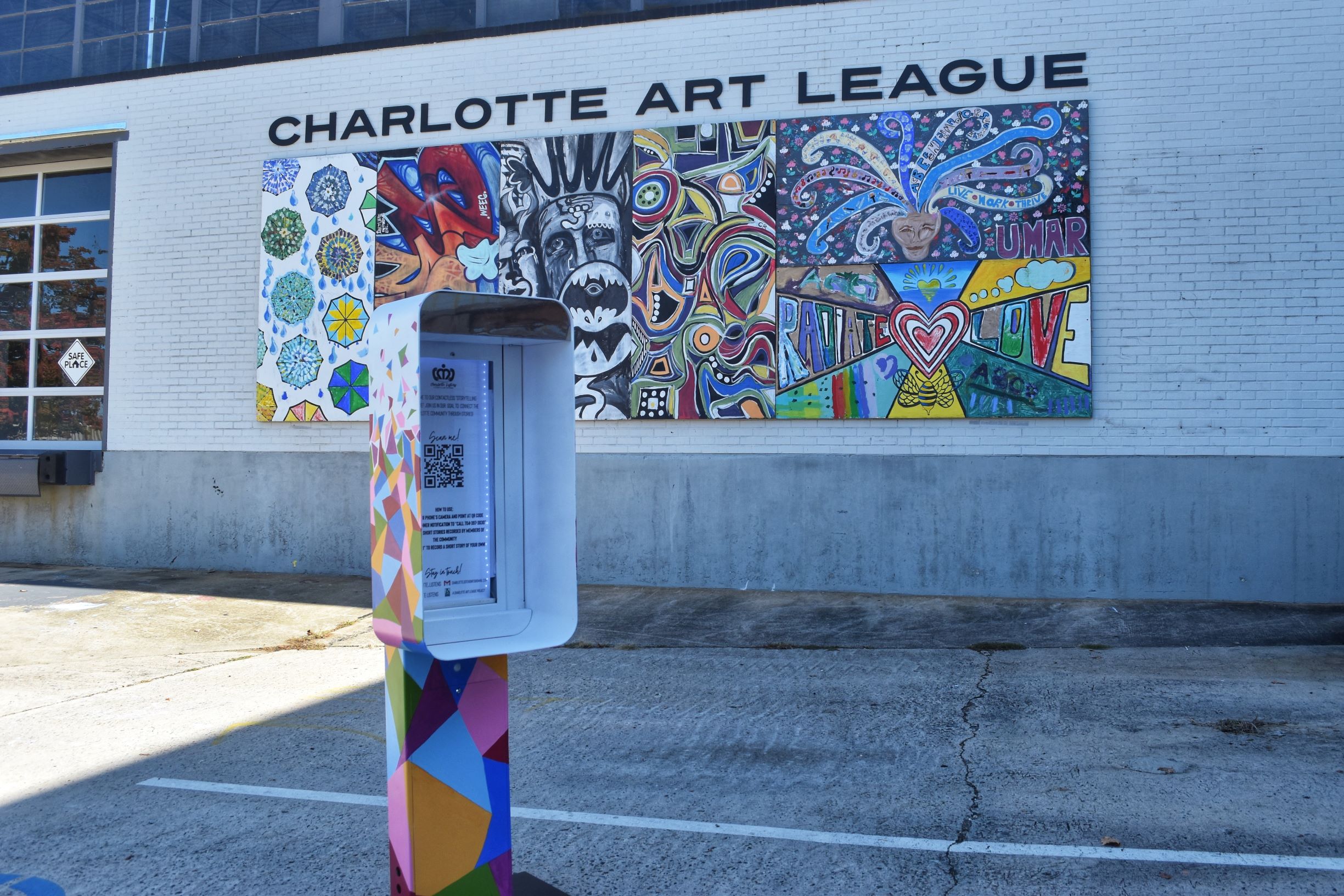 While Covid-19 restrictions encourage people to keep apart for safety reasons, museums and other cultural institutions are finding creative ways to keep people connected. Charlotte Art League’s latest community project centers around story sharing, allowing passersby to hear stories and perspectives from other residents with the opportunity to share their own.

“Charlotte Listens” is the brainchild of Sara Kate Baudhuin, community collaboration and advocacy coordinator at the Charlotte Art League. For several months, the Charlotte native brainstormed ways to foster community connection adapted for times of Covid.

Charlotte Art League will host the “storytelling payphone” project at its site for two weeks before traveling to another pop-up location around the city. The original idea included the phone receiver but Baudhuin opted for a contactless option as Covid cases in Mecklenburg County have steadily increased in past weeks.

She says the project creates a “sense of community and belonging in Charlotte” while participants share what’s important to them in a way that is different and safe.

Using guided story prompts that range from ‘How do you see art shaping society and affecting social change?’ to ‘What kind of art inspires you?’, users can press ‘0’ to record their own story. The menu of five story options is updated as new ones are recorded.

“I’m a really big believer in the power of stories,” Baudhuin said. “Everybody’s story matters. Everybody has stories worth telling that everyone wants to listen to.”

Baudhuin has long admired museum installations featuring interactive story booths where visitors could listen to stories and record their own. Ensuring that the Charlotte project would be accessible to everyone meant researching artists who had successfully taken the story-booth model from the museum to the streets.

Particularly, Baudhin says she was inspired by Times Square Arts and artist Aman Mojadidi’s 2017 public art installation, “Once Upon A Place.” During its two-month run, three phone booths sat in the middle of Times Square where visitors could pick up the receiver to hear stories of immigrants living in New York City.

She also looked to the Leimert Phone Company experiment along the Crenshaw neighborhood corridor in Los Angeles that used phone booths as tools to preserve culture and resist gentrification.

For her idea, Baudhuin had to figure out how to bring “Charlotte Listens” to life with a shoestring budget. Fortunately, help wasn’t far away. She reached out to Matt Bush, a pastor at Elevation Church in Raleigh, who donated a payphone pedestal that was sitting in storage. Last year, the signature orange payphone was installed in downtown Raleigh and uptown Charlotte as part of the church’s annual Love Week celebration. The phone randomly rang as people passed by, and if they picked up, they’d hear a positive message or words of encouragement.

“Charlotte Listens” debuts today at Charlotte Art League (4100A Raleigh St.). Baudhuin says the project will run through the end of the year, at minimum, spending two weeks at each pop-up location. As the two weeks come to an end, she will announce the next site on the project’s Instagram and YouTube accounts.