Under the order, all House of Prayer location in Mecklenburg County would be temporarily shut down. 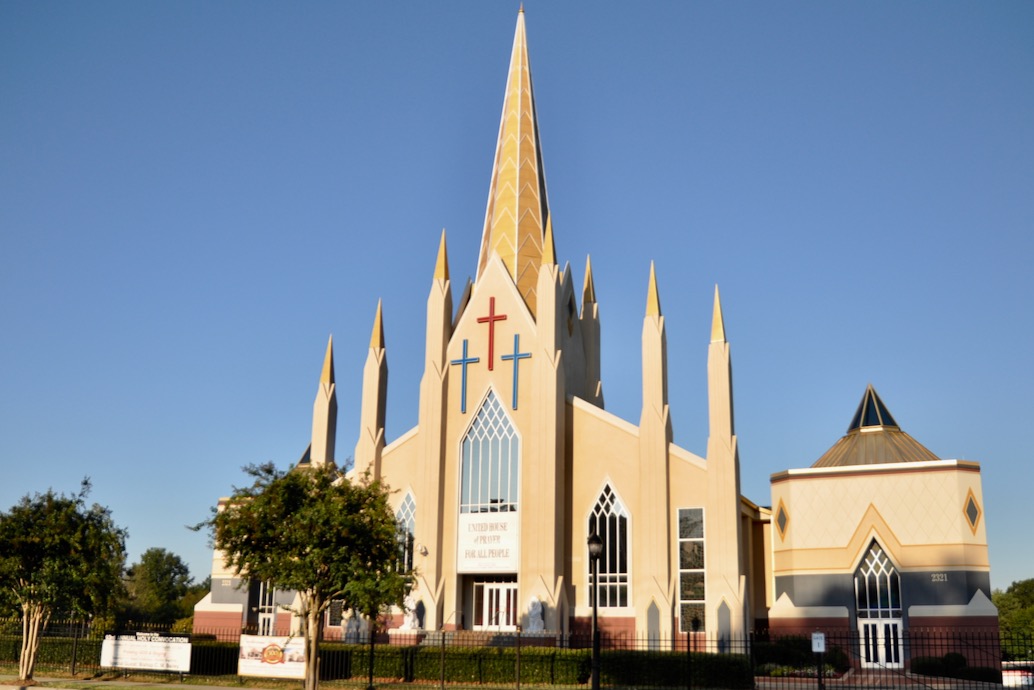 United House of Prayer for All People. Photo: QCity Metro

After an outbreak of Covid-19 at United House of Prayer For All People, county health officials issued an order demanding the temporary closure of all House of Prayer facilities in Mecklenburg County.

If the church failed to comply, county officials said they’d ask a judge to intervene.

The county’s order, called an abatement for an imminent hazard, was issued Saturday, effective at 10 a.m.

County officials said the order was issued after health authorities learned that United House of Prayer was planning to hold a six-day revival service, starting Sunday. The county has traced at least 121 confirmed cases of Covid-19 to an earlier large-scale event at one of the church’s Beatties Ford Road locations.

Mecklenburg County Manager Dena Diorio told reporters that House of Prayer officials had refused to cooperate with health officials seeking to test its members and perform contact tracing for those who attended the previous event, held Oct. 4-11. Diorio said the county also had failed to get a commitment from church officials to cancel the planned revival.

[Read the county’s order of abatement]

“I do not take this authority lightly,” county Health Director Gibbie Harris, who issued the order, told reporters. “I have been in public health for over 30 years. This is the third abatement that I have ever issued in my entire career.”

Why it matters: The county’s abatement order comes as Covid-19 cases have spiked in many states, leading some of the nation’s top health officials to warn of a major winter outbreak. In Mecklenburg, where confirmed cases had previously plateaued, officials in recent weeks have reported a gradual rise in confirmed cases as well as in hospital admissions. Health officials have said that much of the increase had be traced to public and family gatherings.

On Friday, more than 85,000 new cases of Covid-19 were reported around the country — the nation’s highest single-day total since the pandemic began.

Officials at United House of Prayer could not be reached for comment Saturday, and the church has not responded to previous media requests since the Covid-19 outbreak was announced.

Based in Washington, D.C., United House of Prayer for All People has churches throughout the United States, including a major presence in the Charlotte area.

Earlier this month, the church held a convocation at its location at 2321 Beatties Ford Road. County health officials have said that as many as 1,000 people may have attended the multi-day event.

Under an executive order signed by Gov. Roy Cooper to combat the spread of Covid-19, mass gatherings in the state are limited to 25 people indoors and 50 people outdoors, with an exception for large, outdoor venues such as stadiums. The authorities generally have not enforced that provision against houses of worship.

Of the confirmed cases tied to the church’s convocation, two were in Iredell County and another in Cabarrus County. At least seven people have been admitted to hospitals, with “at least a couple” on ventilators, Harris said. Health officials have said that some who attended the event may have returned to other states.

In Mecklenburg, authorities have confirmed three deaths and are investigating a fourth for possible ties to the church event, Harris said. The county also has traced 16 cases of Covid-19 to two senior-living facilities. At least 14 of those cases were found at the nearby Madison Saints Paradise retirement community, which is owned by the church.

As of early Saturday, Harris said, church officials had rejected all overtures from county health officials, including a request to set up a testing site at the Beatties Ford Road location.

“There have been a number of conversations between my staff and with the pastor, as well as with the folks that run the facility across the street from the seniors,” Harris said. “All of those conversations have been reasonable but very noncommittal. So we have gotten ‘no,’ and basically what we’ve been told is that they have this under control.”

Under the county’s abatement order, in-person gatherings at all House of Prayer facilities in Mecklenburg County would be deemed an “imminent hazard,” up to and including Nov. 21.

Harris said the order had been delivered to the church and its attorney.

If church officials refuse to comply, the county would ask a judge to issue an injunction, Diorio said. When asked about constitutional concerns relating to freedom of worship, Diorio said county officials had had “a lot of conversations around that.”

“We feel very strongly that it’s our responsibility to protect the public health and safety. If we have to go to court and get a temporary restraining order, we will see how the judge rules in this instance,” she said.

Meanwhile, the county is asking residents, for now, to avoid events related to the church, because, Diorio said, “it’s not safe.”