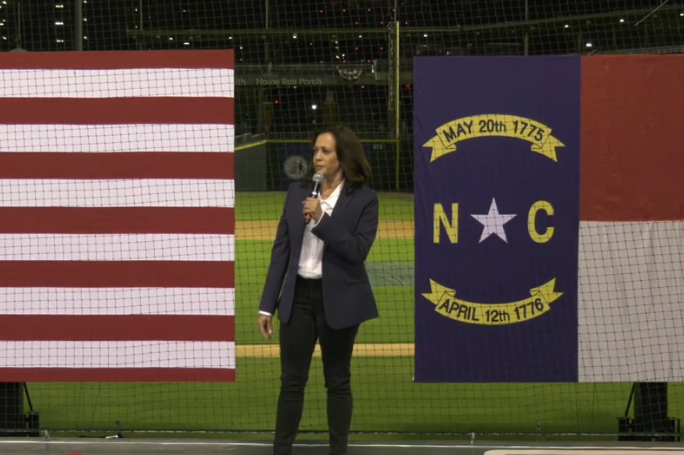 The California senator was scheduled to be in Charlotte on Oct. 15, but two individuals connected to the Bidden-Harris campaign tested positive for Covid-19 the night before. Harris planned to participate in a campaign hub grand opening in the afternoon and a voter mobilization event that evening. Instead, she joined a virtual voter mobilization event.

During her rescheduled visit Wednesday, Harris hosted a socially distanced voter mobilization event at Truist Field — home to the Charlotte Knights. It marked Harris’ second visit to North Carolina since her history-making nomination for vice president, but it was her first time in Charlotte.

North Carolina is a battleground state that both presidential candidates (Donald Trump and Joe Biden) are vying to win. Early voting and mail-in ballots are integral in mobilizing voters, and both campaigns are looking to target their constituents amid the Covid-19 pandemic.

Harris not only spoke to the 150 people at Truist Field but also potential voters online, as the event was livestreamed on JoeBiden.com and @KamalaHarris on Twitter. Other notable speakers included Congresswoman Alma Adams, Mayor Vi Lyles and Duke University Women’s Basketball Coach Kara Lawson.

“You are a sister, a friend, a mentor, you encourage me every step of the way and you’re always there for me,” Harris said about Adams during the voter mobilization event.

With 13 days to go, Harris emphasized early voting, especially in the Black community. She referenced how the Supreme Court “gutted” the Voting Rights Act in 2013 and set in place laws that the North Carolina Court of Appeals said was “written with surgical procession to try to get in the way of Black folks voting.”

“This moment will pass, and years from now our children, our grandchildren and others are going to look in our eyes and ask us where you were at that moment,” Harris said. “What we’re going to be able to talk about is so much more than just how we felt, we are going to tell them what we did.”

Harris touched down in the Queen City at 2 p.m. and caravanned straight to Social Status in Plaza Midwood to meet with the street fashion and sneaker boutique’s owner James Whitner.

The boutique is preparing to release a new line of limited-edition Converse sneakers that were designed by New York-based artist Nina Chanel Abney and backed by local HBCUs. Whitner told reporters that the sneakers will capture the energy of youth culture and “push the idea of voting and connectivity.” The shoes are etched with the year “2020” and decked with buttons that say, “Vote” and “Black Lives Matter.”

Whitner told Harris inside the boutique that he hoped to use his business as a platform to connect with the community, especially the Black community, and show them that there are opportunities and hope for everyone.