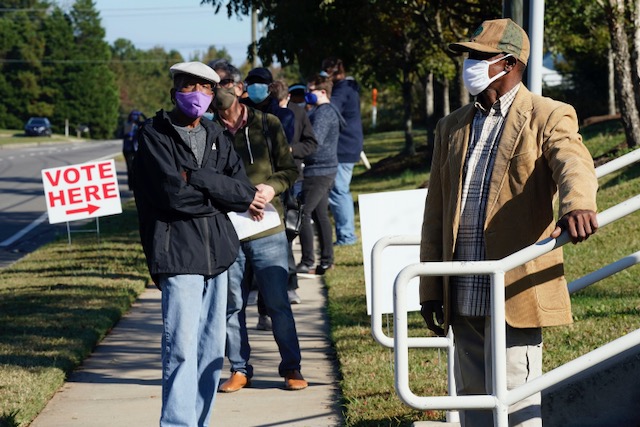 The results closely mirrored an ECU poll conducted in early October, which showed Biden with a 4-point lead. (The poll has a margin of error of 3.4 percentage points.)

Why it matters: North Carolina, with its 15 electoral votes, is one of several states won by Trump in 2016 that now appear to be leaning away from the president.

Most notable was Biden’s apparent lead among suburban voters. In 2016, exit polls indicated that Trump won 60% of the state’s suburban voters, versus 36% for Hillary Clinton. Now four years later, Trump and Biden are tied in the suburbs, each 49% of likely voters. Among suburban women, Biden leads Trump 54% to 43%.

If that pattern holds until election day, Biden has a “strong shot at winning North Carolina,” said Peter Francia, director of the ECU Center for Survey Research.

There is little doubt that voters this year are motivated. As of 5 p.m. Monday, more than 2 million of North Carolina’s 7.3 million registered voters had cast early ballots. More than 1.4 million of those votes were cast at early voting sites. Similar patterns of early voting had been seen in other swing states, including Florida and Texas.

Whether those early-voting patterns will favor one candidate over another is not yet clear, political analysts have said.

In North Carolina, for example, the UCU Poll found a high level of excitement among Trump supporters. Nearly three out (74%) said they were “very excited” to vote (or to have voted). By comparison, 65% of Biden supporters fall into the “very excited” category.

“In an extremely competitive election, voter turnout is often the decisive factor,” he said. “…That excitement advantage could well translate into a voter turnout advantage (for Trump). If so, Republican candidates, from the top to the bottom of the ballot, could win in these hyper-competitive races.”

Despite trailing Biden overall in North Carolina, Trump continues to hold a commanding lead among the state’s rural voters (57% to 39%) as well as among White voters without a four-year college degree (65% to 32%).