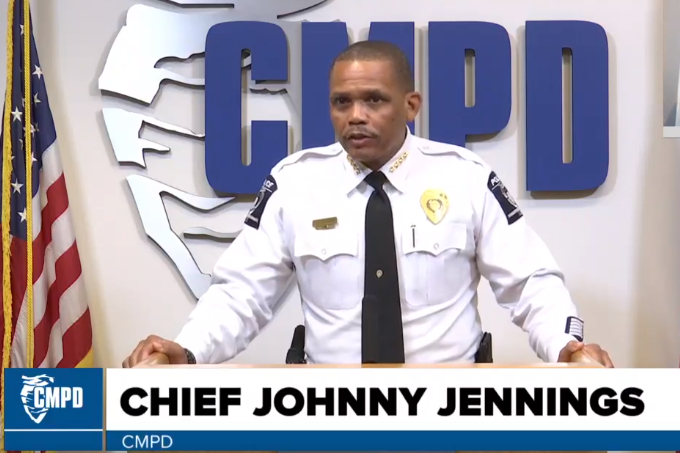 Charlotte-Mecklenburg Police Chief Johnny Jennings pleaded to the community to work with the police department in solving active and ongoing homicide cases.

At a CMPD press briefing Wednesday, Jennings called the three homicides that took place within a 12-hour timespan on Monday night and Tuesday morning “disturbing.”

“I’ve been doing this for almost 29 years. Without hesitation, this is one of the most challenging that I’ve ever seen in my career,” Jennings said.

Jennings commended the homicide unit and the community for CMPD’s 73% clearance rate, which he said is well above the national average.

“Our men and women in blue, and other members of this agency, have stepped up,” he said. “The community has also stepped up, and I’m very happy about that because we can’t improve as an agency without them. This is not something the police can have and put on our shoulders ourselves.”

Lt. Bryan Crum credited the community for assisting in the clearance of active homicide cases, particularly the shooting of 58-year-old Ernest Lightner near the 1200 block of Campus Street on Monday. Gina Michelle Kilgo has been charged with Lightner’s murder, Crum announced at the press briefing.

The other two homicides that resulted in the deaths of Emanuel Dewayne Taylor, near the 2600 block of Clydesdale Terrace, and Aaron Deshane Shuford Jr., near the intersection of Old Statesville Road and W. W.T. Harris Boulevard, are active and ongoing.

Crum said a recurring theme with homicide cases is that the people involved often have pre-existing relationships.

“They have minor disagreements that spiral into violence and for some reason instead of stepping back and letting cooler heads prevail, people are reaching for a gun and its ending tragically,” he explained.

“It’s going to take the community to solve this problem, it’s not something that we can do on our own,” Crum reiterated.

When asked about the active investigation into the murders of the four Juneteenth partygoers killed along Beatties Ford Road, Crum didn’t provide many details as CMPD is leveraging every resource they have to solve the case. The investigation is still active and ongoing.

CMPD has received tips from the community about the Juneteenth homicides, but they haven’t gotten that tip to close the case, Crum said.

The Bureau of Alcohol, Tobacco, Firearms and Explosives is offering a $10,000 reward for information leading to the identification, arrest and conviction of those responsible for the Juneteenth homicides. Additionally, Crime Stoppers is offering a $5,000 reward.

Anyone with information about the cases is asked to call 704-432-TIPS to speak with homicide detectives, or call Crime Stoppers at 704-334-1600 or go online at charlottecrimestoppers.com.