The fourth generation of Griers push forward with the family business. 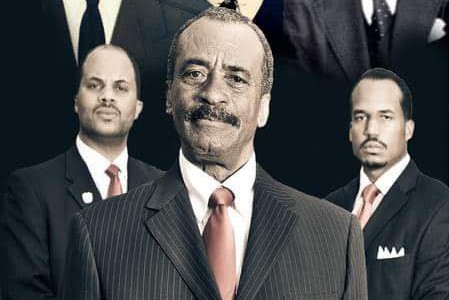 A familial feeling of comfort and pride filled the streets of Grier Heights, a neighborhood in east Charlotte and the home of Arthur E. Grier Jr., a pillar in the community and patriarch of A.E. Grier & Sons Funeral and Cremation.

The sounds of trumpets and knocks from a horse-drawn carriage filled the air as dozens of friends, family and community members walked in a parade on Wednesday to honor the life of Grier Jr., affectionately known as Gene, who died Sept. 22 at the age of 77.

Allen Grier, Gene’s son and one of the heirs to the family business, says the outpour of love from the community has been overwhelming, but not surprising, because of the lives his father touched.

“He was definitely a people person, never met a stranger, had a golden heart,” Allen said. “He would give anything to someone to try and help them…sometimes, we would say he gave too much away. But he had a golden heart and wanted to treat everyone the same.”

Miss Kitty met Gene decades ago growing up in Grier Heights, locally known as Griertown. She tearfully remembered what many people recall about the patriarch — his kindness.

“Gene buried so many people in Griertown that didn’t have money. I know,” she said emphatically. “He always reached out to others. He was a great person, a loving, caring, giving person, and I’m going to miss him. He was a legend.”

Henry Moore echoed those sentiments. He first met Gene over 50 years ago as a young child in Griertown. Moore says what made Gene stand out then and now was just how good-hearted he was.

“That’s the family’s legacy. They always did stuff for people in the community. He was a kind person, and the family was the same.”

Gene was born on March 21, 1943, at Good Samaritan Hospital in Charlotte. In 1961, he graduated from the historic Second Ward High School and went on to attend Florida A&M University in Tallahassee, Florida, before joining the U.S. Army.

After being honorably discharged in 1966, Gene attended Cincinnati College of Mortuary Science in Ohio, graduating in 1969 before returning to his hometown.

Allen says his father, the son of a mortician, didn’t initially want to go into the funeral business, just like himself.

“I never thought I would be in the funeral industry, and he was the same way. He wanted to play football, coach football, but he was the only child, so he had to keep going and that’s what my brother and I plan to do and take it to another level.”

The Grier Heights neighborhood, named after Arthur S. Grier, Gene’s grandfather, was developed by the elder along with a few others in the early 1920s.

After taking over, Gene quickly made a name for himself in the mortuary business with his professionalism and compassion, once stating he gets “enjoyment out of pleasing the families that he serves.”

From 1977 to 1982, Gene served as the second African American elected to the North Carolina Board of Mortuary Science.

In business for nearly a century, the Griers serviced countless local families for generations along with prominent sports figures like Hank Aaron, Ronde and Tiki Barber, Charlotte’s own Antawn Jamison and singer-songwriter Anthony Hamilton.

The Grier brothers also recall the times that entertainers like Marvin Gaye came by their father’s home when he visited Charlotte.

This summer, Gene was set to be recognized for his dedicated service in the funeral industry at the annual North Carolina Board of Mortuary Science convention before it was canceled due to the coronavirus pandemic.

In recent years, Gene’s health began to decline before he ultimately lost his battle with cancer.

Allen says a lot of people didn’t know how sick their father was, but he along with his brother and partner, A.E. Grier III, had been preparing to take over the family business as the fourth generation of Griers.

“One thing I learned is that most family businesses don’t last past the third generation,” Allen said. “My brother and I are actually the fourth generation. That’s unheard of in any kind of business, so to do that and be Black speaks volumes.”

A.E. adds that the brothers have plans to expand the family business to other parts of the city as well as train the next generation of Griers, which include two nieces, the daughters of their deceased older brother, Anthony Eugene Grier, who died in 1998.

“Being in the funeral business gives us a sense of pride because we’re professionals like doctors and lawyers,” A.E. said. “We set the bar just like those guys do, and it gives us a great sense of pride knowing that we can care for families in their time of need.”

The family is hosting a wake on Thursday from 5 to 9 p.m. at A.E. Grier & Sons Chapel. Arthur E. Grier Jr.’s funeral is at noon on Friday at Victory Christian Center Dome.