In new NC ads, the Biden campaign reaches out to Black men

Shot in a Durham barbershop with local residents, the "Shop Talk" ads emphasize the importance of simply voting. 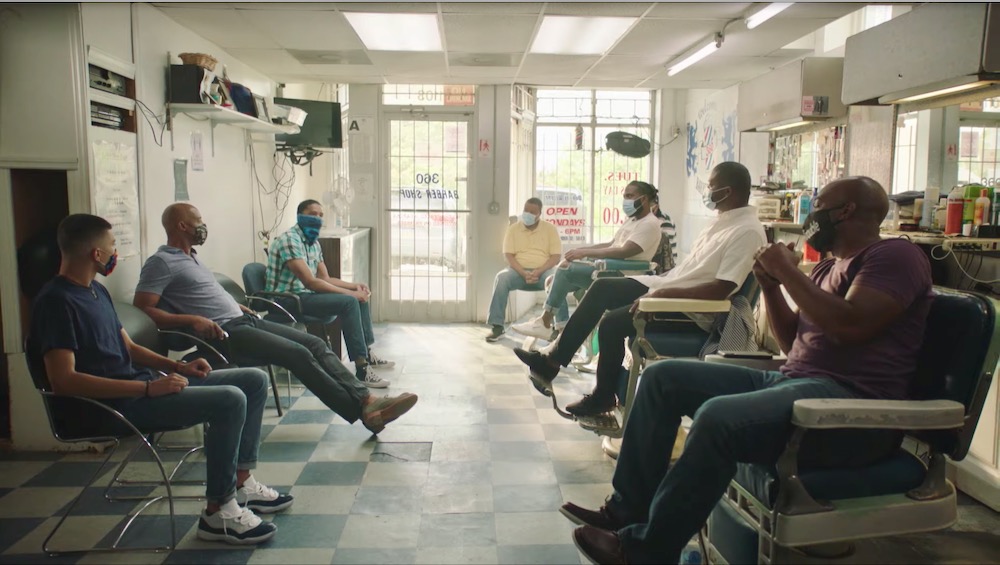 With the 2020 presidential race entering its final weeks, the Joe Biden campaign will launch a series of television and digital ads today that seem designed to increase the percentage of Black men who vote in North Carolina.

The “Shop Talk” ad series was shot in a Black-owned barbershop in Durham and features Black men who live and work in the Raleigh-Durham area. At least two are graduates of UNC Charlotte.

A campaign spokesman said the ads will air on television and digital platforms in North Carolina and other battleground states, including Michigan, Wisconsin and Pennsylvania.

Why it matters: North Carolina, with its 15 electoral votes, is still up for grabs, according to political analysts. And the number of Black voters who actually go to the polls on Nov. 3. may well determine which candidate — Biden or President Donald Trump — wins the state.

Ever since Barack Obama carried North Carolina in 2008 by a scant 0.32% margin — the first Democratic presidential candidate to win here since Jimmy Carter in 1976 — the state has been lumped with other political battlegrounds like Florida, Michigan and Pennsylvania. (Republican Mitt Romney won North Carolina in 2012 with a 2% margin, and Trump followed up four years later with a 3.67% edge over Hillary Clinton.)

“We’ve had three straight competitive elections. There’s no reason to think that 2020 would be any different,” said Peter Francia, an East Carolina University political science professor who also directs the ECU Poll.

To have a reasonable shot of winning the state, Francia said, Biden “needs to do better with Black turnout than Hillary Clinton did.”

Nearly 170,000 Black Democrats who voted in North Carolina in 2012 didn’t go to the polls at all the year Clinton lost to Trump. That year, Black voters dropped to a 20% share of the state’s electorate from the 23% Obama saw during the year of his re-election campaign, Francia said.

With its new political ads, the Biden campaign appears to go directly after those voters. In addition to criticizing Trump’s handling of the coronavirus pandemic, which has disproportionately affected communities of color, the men in the Durham barbershop emphasize the importance of simply voting.

“It’s our responsibility. If we don’t lead that effort to make things better, we can’t ask other people to do it. There is no good reason not to vote,” Nate Branscomb of Cary, an accountant/CPA, says in one of the ads.

Francia, the ECU professor, said the Biden campaign also may be focusing on Black men because exit polls show that Black men are more likely than Black women to vote for Republican candidates.

In 2016, Trump won about 8% of the national Black vote, and he has predicted that he will increase that percentage this time around.

Trump recently boasted that he “did more for the Black community than anybody with the possible exception of Abraham Lincoln.” In one of the Biden ads, the Black men inside the Durham barbershop are seen laughing following a clip of Trump’s remarks.

In the last presidential election, about 13% of Black men voted to Trump, Francia said. That compares with about 4% of Black women who voted for the New York billionaire.

“There is a little bit of a gender gap there between Black men and Black women,” he said. “Trump’s message of ‘America first’ and investing at home, bringing back manufacturing jobs, connected with working-class voters. And of course many black men are working class.”

While Biden will easily win the Black vote overall, Francia said mobilizing more Black voters to go to the polls will be key for any Democratic victory in North Carolina.

“He’s got to get that number back to, I think, close to the 23% (of the state’s electorate) that we saw in 2012, when Obama ran a very, very competitive race (in North Carolina). But for Biden to win overall, he’s also going to need to make inroads with the White population that does not have a four-year college degree — those White, working-class voters.”