P-Valley’s J. Alphonse Nicholson, from North Carolina to The Pynk

The Greensboro native talks about his acting career, including his start at a North Carolina HBCU, how he prioritizes fatherhood and his journey through show business. 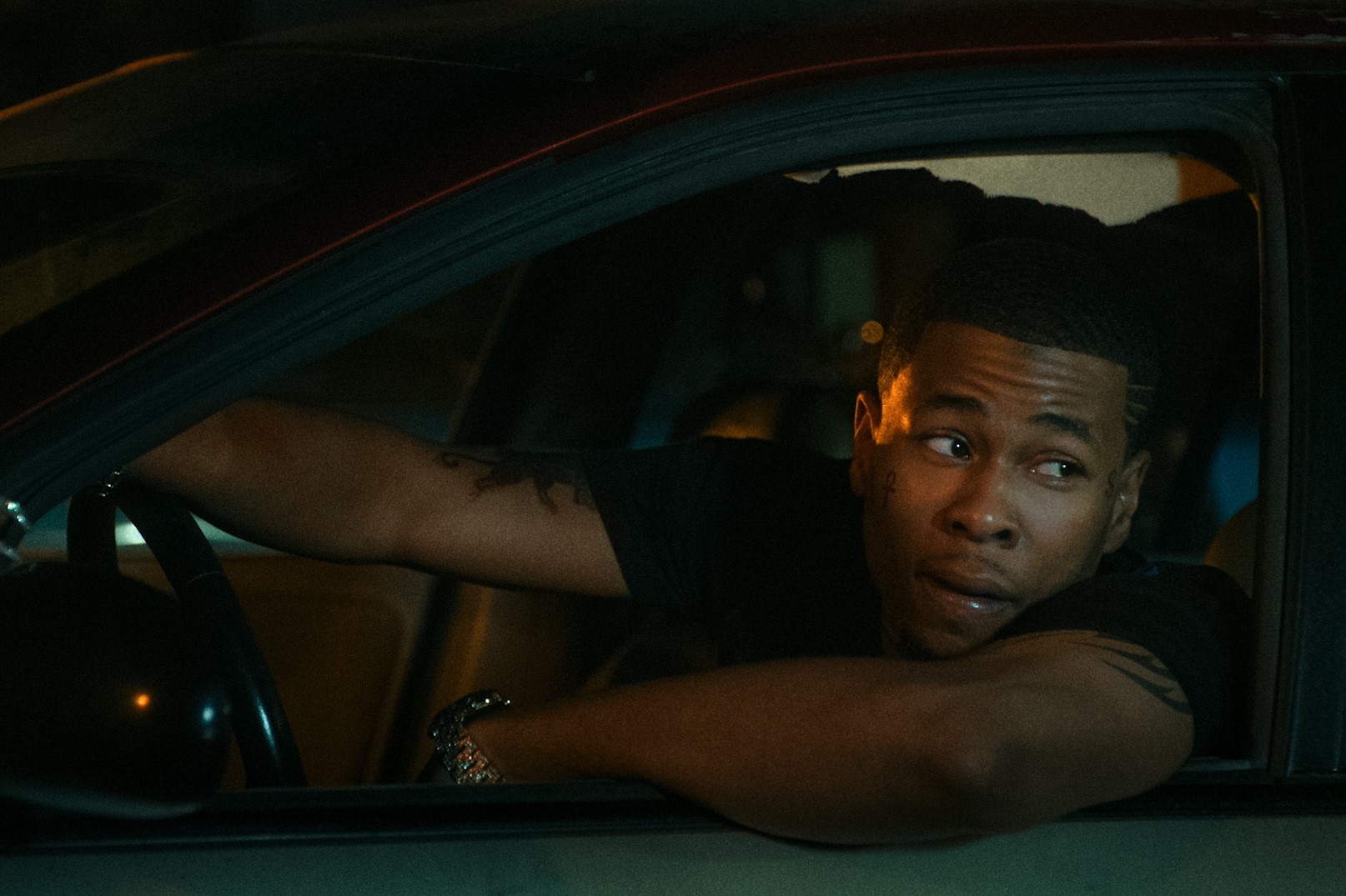 Before he took on the role of Lil Murda in the Starz breakout series “P-Valley,” J. Alphonse Nicholson was building a name as a gifted stage actor and dynamic musician.

The Greensboro native grew up in a musical household and took his talents to North Carolina Central University, enrolling in the historically Black institution’s theater program in 2008. Since then, the 30-year-old has performed in several productions and made his Broadway debut earlier this year in “A Soldier’s Play” with David Alan Grier and Blair Underwood.

But it’s his delivery on P-Valley as LaMarques aka Lil Murda, that’s gaining attention. The TV adaptation of showrunner Katori Hall’s 2015 play follows the people in and around The Pynk strip club in the fictional city of Chucalissa, Mississippi. Throughout the eight-episode debut season, we’ve watched Lil Murda’s hyper-masculine persona and dream-chaser storyline of music success juxtaposed with a secret romance with The Pynk’s owner, Uncle Clifford.

In our interview below, Nicholson shares more about his North Carolina roots, how he prioritizes fatherhood and his journey through show business.

Answers were edited for brevity.

Where did that bug for music and acting first start?

It started at home with my mother and my father investing in my music abilities by having drums in the house, guitar, piano. As I got older, my mother continued to push that.

I played drums in the church. I was on the drumline in middle school and high school. The schools that I went to in Greensboro were predominantly Black and full of culture. I cultivated that pretty heavily at James B. Dudley High School where I had some amazing mentors. During my teen years, even though I didn’t know that I wanted to be an actor at that time, a lot of those seeds were planted in me then.

Following that, you went on to North Carolina Central University.

Correct. I went to Central. I majored in theater. I stayed at Central for three years. After that, I dropped out of school and then started working professionally in the community — in Durham and Chapel Hill. From there, I moved to New York about seven, eight years ago.

I wanted to be smart about it. I didn’t want to go to New York without an opportunity. Through the connections I made in North Carolina… I gained an opportunity to compose a show at the Lincoln Center Education program. I’m a street drummer as well. One of my director friends saw the video of me street drumming and sent it to the playwright, and they incorporated me into the show.

I already wanted to move to New York, but I knew I needed to have some type of opportunity there. Once I got there, everything started to work out. Definitely some very low moments, a lot of high moments, a lot of moments in the middle. You know, just sticking it out. I didn’t have any family there per se but created a lot of friends circles and ended up getting some really close associates.

How did street drumming in New York come about?

I just needed to find some way to make income but also have free time to follow my passion as an actor. Shout out to Khaleel [Loyd] and Loyd Visuals, they captured some moments of my life and through that journey with street drumming. When I started doing it in Chapel Hill, it was a way to make extra income. Once I got to New York, it became basically my main source of income, especially when the acting stuff was slow.

Learning how New York worked and how people understood the etiquette of tipping, it really just allowed me to say, hey, I can do this every day, even though it’s hard work. But if I put in the time and put the grind in, it’s going to pay off for me. I would put in three to four hours a day, and the rest of my time I could spend either rehearsing for something or auditioning. I also had ample time to go back to North Carolina and see my son. I just needed something flexible, and I knew I had the skill set to make people intrigued by what I was doing.

What was your first opportunity on stage as a professional actor? How was that experience?

It was 2009. I was the lead role in this show called “Caleb Calypso and the Midnight Marauders” by Howard L. Craft, who also wrote the one-man show I did in New York called “Freight: The Five Incarnations of Abel Green.”

I was fresh out of Central. I’d done two plays at Central, and one of the directors in the community…cast me in that show. It was a wonderful experience. Because of that experience, I owe a lot of my paying attention to vulnerability and being open. I cherish that first experience…it let me know that this is what I want to do for the rest of my life.

In between that first play and leading up to Broadway, what were some of your memorable moments?

I’ve been blessed with the opportunity to work with so many great people. Broadway was obviously a really big moment for me. I’d also say “Freight,” which we received a New York Times Critics’ Pick for. We were nominated for an Audelco Award for that. It’s been plenty of amazing moments in between, and I always try to cherish each milestone.

I would also say P-Valley has been one of the largest milestones I’ve been able to accomplish in my career. Being a series regular on the show, knowing people are going to see my face every episode, is a really big deal.

How did you approach the character of Lil Murda?

Lil Murda is so different than all the other characters I’ve portrayed, but also, I know Lil Murda. I have brothers and cousins who live that life. For me, it was approaching the work very honest and also approaching it in the sense that I can help someone live their truth and understand who they are and turn the mirror on themselves.

Being a heterosexual male playing this role, I just wanted to be very honest and very sensitive to the content to make sure I was portraying this character on behalf of the community whose voice is not heard.

The show puts a spotlight on a different side of the culture inside of strip clubs and the women who work there. What attracted you to join the project in the first place?

Katori Hall is just an amazing writer. I had already known about Katori Hall through the theater scene. She’s an award-winning playwright. Once I had an understanding of what the story was, it changed my perspective completely on strippers and sex work. I said this story is extremely important.

Then, to go further, they said it was going to be directed by all women, and that’s groundbreaking, so I had to be part of that. Working on this show, you see the strength of women in a completely different way. It really opened my eyes up to a lot of the egos that men need to strip off — no pun intended (laughs) — to be able to view that part of our culture in a very respectful way.

I’m glad that we’re able to tell this story. To understand how powerful the Black woman is, particularly, is just awesome to be part of.

You’re also a father. How do you balance your career knowing that being a present father is so important to you?

Fatherhood always comes first. No matter what I have to do, I’m always going to be there for my son. And then having a career that’s able to take care of him is important. The fact that I’m blessed to have that as an actor, it really works out. But it’s hard, being away from him for weeks at a time. I never go too long without seeing my son. It is really hard missing the day-to-day moments.

I’ve been doing this since he was born, so it’s not foreign to us. His mom and I co-parenting, it’s one of those things we’ve gotten better with over time. For me, it’s extremely important that he understands. We talk about why I’m leaving, how long I’m going to be working on a project, or why he can’t see — for example, P-Valley. Now with me being engaged and having a stepdaughter, mending that village together takes work, but we all make it happen. I have a great support system.

Speaking of your fiancee, I see you always bigging her up. What has that meant to have someone ride with you throughout your career?

Nafeesha is amazing. I think anyone I talk to will hear her name several times in the conversation just because she’s my #1 support, she’s my #1 fan. She’s taught me so many things in the five years we’ve been together. I learn from her every day, I lean on her. She means the world to me, and I’m grateful for that. I hope everyone has that one day.

How do you chill out? What does relaxing look like to you?

I enjoy cooking for my family. I love to sit on my porch or balcony. The weather is always great [in L.A.]. I am an advocate for cannabis, so that’s another way of relaxing. I pick up a book every now and then or read a script. I’m not a huge TV watcher, but I don’t mind checking out a good movie. I bought a PS4 over this corona[virus] period (laughs), so I’ve been hopping on that. I see how people can get addicted to it.

You’ve done acting and music. Do you have a preference for one over the other?

I enjoy doing both so much that no matter which one I’m doing, I’m going to be happy. I love when the two can come together, like with P-Valley. It’s so much more I want to do with both crafts. A lot of other things I want to do with my foundation and for the community. I find happiness doing multiple things. I think it’ll be hard to choose one over the other.

I would say, Octavia Spencer. Saying I want to work with her one day and then having the opportunity is very surreal. Blair Underwood, David Alan Grier. Michael B. Jordan and Jamie Foxx — we’re a little closer in age, we’re more like peers — to have seen their work and want to work beside them, for it to happen was just an amazing feeling.

So many great artists out here I want to work with, it would be hard to name. But of course, Denzel Washington, Viola Davis, Chiwetel Ejiofor — who’s an amazing actor. Meryl Streep, Dustin Hoffman, it’s a lot of dope actors.