Principles of generosity thread across generations

Black philanthropists share their perspectives on giving for social change. 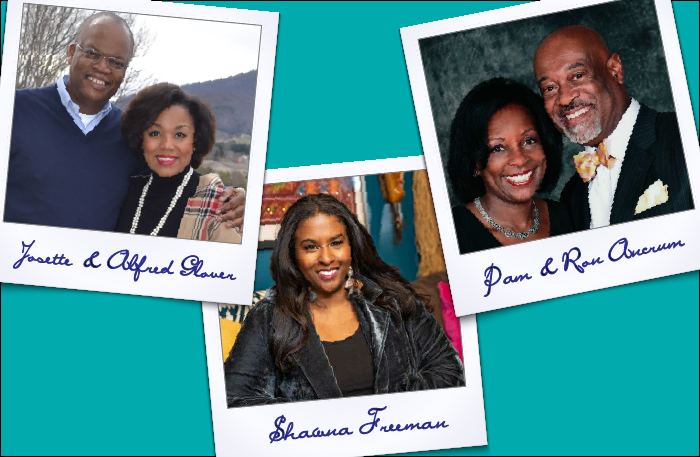 Black philanthropy comprises a rich and varied tapestry — as divergent as its people, the origins of its inspiration, and its manifestations in giving. Frequently rooted in bonds of family and community, expressions of giving encompass the full spectrum of time, talent, and treasures. However, one common, intergenerational thread is the practice of simultaneously looking back while paying forward, a perspective that inspires the philosophies of giving among many Black philanthropists.

In honor of globally celebrated Black Philanthropy Month and on behalf of the Charlotte’s New Generation of African American Philanthropists (NGAAP) giving circle, I had the honor of interviewing four Black philanthropists to explore the roots and guiding philosophies of their giving practices.

I spoke with six individuals: Pam and Ron Ancrum, who are relative newcomers to Charlotte; former Charlotteans Josette and Alfred Glover (Alfred is a native Charlottean and they are frequent visitors to the city); Shawna Freeman, a six-year resident of Charlotte; and John Jackson, Charlotte resident and President and CEO of the Schott Foundation for Public Education.

Early exposure to, and grounding in philanthropy

With only one exception, these philanthropists were inspired by having observed giving behavior among their parents and extended family members. Those examples of lived philanthropy frequently took the form of compassionate care of family, friends, and neighbors in times of need, but included volunteerism and sacrificial tithing as well. At the time, none of the NGAAP interviewees thought of financially supporting or taking in family members as philanthropy, but all have subsequently come to embrace a broader understanding of what it means to engage in giving.

John Jackson came to philanthropy through his work in education justice, first as a member of the Clinton administration, and later in his national work with NAACP Education Division across 2300 sites. Through that work, he grew in his appreciation for the power of grassroots investments, an understanding of which influenced his personal and professional approach to philanthropic investment.

Philosophy of giving, and how was it informed

There is a deeply personal  aspect to each of the NGAAP philanthropists’ philosophy of giving. Pam Ancrum and Shawna Freeman expressed a passion for impacting the lives of Black women and girls; Ron Ancrum has a similar passion for changing the opportunity trajectory for Black men and boys.

Alfred Glover, a proud alum of West Charlotte High School, speaks with emotion about having been “the product of benevolence.” His college education was funded by a foundation and individual philanthropists and he is deeply committed to paying it forward.

Shawna Freeman described how she stumbled upon NGAAP by chance when she became curious about a gathering for an event she observed in downtown Charlotte one evening in 2014. Dr. Emmett Carson, former head of Silicon Valley Community Foundation, was the keynote speaker for NGAAP’s Black Philanthropy Month observance, and she was touched by his framing of philanthropy as time, talent, and treasure. She immediately recognized that philanthropy was already part of her family’s legacy and practices. It  transformed and simplified her concept of philanthropy and made her realize that giving is not about a certain phase of life or a giving threshold. That event shifted her outlook and practices relative to giving.

John Jackson subscribes to three tenets of giving. First, he believes that it is about resourcing individuals and institutions “closest to the pain” and offering the best opportunity for progress toward addressing those needs. Second, it is about building trust between funders and recipients, and trusting that those closest to the needs will use resources appropriately to bring about change. Third, Jackson invests for systemic change to ensure that change becomes a public good, not limited to localized impact.

For our NGAAP interviewees, African-American philanthropy manifests as intersectional giving. It entails elevating issues about which they are passionate, while investing in those issues in a way that centers populations of color as beneficiaries. Pam and Ron Ancrum make sure that their investments in education and the arts are made in a way that enriches the experiences of people of color. Josette and Alfred Glover target their investments in education at West Charlotte High School, which has a predominately Black student body, as well as in nurturing entrepreneurship among people of color. Shawna Freeman directs her giving toward organizations that are dedicated to serving the Black community, with a laser focus on Black women and girls.

John Jackson is adamant that, in his work and in Black giving, we must use a racial/gender equity lens in funding.  Specifically, he believes that we can’t get to excellence in educational systems because the inequities are defined by racial and ethnic inequities. These institutionalized, race-based inequities can only be rectified by funding in a way that targets the sources and root causes of the inequities.

Please share a story of transformational impact that was a result of your giving.

The range of stories of impact shared by NGAAP philanthropists illustrates their expansive ideas about the nature of philanthropy. The Ancrums described their years of commitment to a Black community health clinic in Boston. They provided fundraising counsel, Ron organized their fundraising events and Pam served as mistress of ceremony, they served as volunteers and, ultimately, they became donors – thus manifesting time, talent and treasure.

In response to a request from a former principal of West Charlotte High School, the Glovers sponsored 30 students for two years on bus trips to visit historically Black colleges and universities (HBCUs). The students were first-generation, potential college students with no prior exposure to higher education or the application process. Subsequent to the trips, 71 percent of the students who participated either enrolled in community college or a four-year university.

As a freshman at Princeton University, Shawna Freeman became uncomfortably aware of the invisible, “have-nots” part of the surrounding Princeton community. There were plenty of community volunteers from the university, but none of them were Black. Shawna began a mentoring relationship with her mentee, Christina, as a Big Brothers/Big Sisters volunteer during her freshman year and maintained it throughout her time at Princeton and beyond. She believes that the impact on Christina’s life was transformational, in terms of her academic performance and her ability to navigate a path toward postsecondary education and a career choice. Christina is now a teacher.

In our current social environment, what suggestion(s) would you offer people wanting to give boldly to advance racial equity and justice in Charlotte?

Intentionality in investing, an unrelenting focus on social justice and equity, and leaving a legacy  emerged as the predominant themes in the NGAAP investors’ responses to this question.

Ron and Pam Ancrum advised donors to be clear about the change they want to make through giving, commit to a consistent giving amount, and carve out time to volunteer for a cause of choice. They stressed the importance of leaving a legacy of giving to a cause as a way of signaling its value and importance so that others might support it as well.

Alfred Glover has a national perspective on giving boldly. His believes that there are sufficient numbers of Blacks in major US cities that have benefitted and succeeded from hard work and philanthropic investments in them that it should be possible to raise capital without going to the big name, “usual suspects” for contributions. The notion of raising $5M for an African-American fund to support and assist young people who are protesting for justice yet also may need angel investors to invest in their business plans should be doable. Currently, those young people don’t have a shot at finding investment support from the Black community.

John Jackson stated,  “If you have a donor that cares about social justice and you’re not investing in organizations led by people of color, you don’t have a balanced portfolio.” He believes that foundations and donors have to take the long view on investing in leaders of color and organizations led by them, which requires being bold and giving resources in a way that should make us feel uncomfortable.

Finally, Shawna Freeman believes that bold giving is not just asking for and supporting what we think we can get, it is pushing to address underlying issues and systemic inequities. It goes beyond simply bridging gaps created by a broken system – it addresses the bigger question of what fundamental change needs to happen in order to achieve real justice and equity on a variety of measures connected to physical, social, and economic health as a people.