The Charlotte business owner, with two co-investors, will soon welcome three new tenants to the Five Points property they bought. 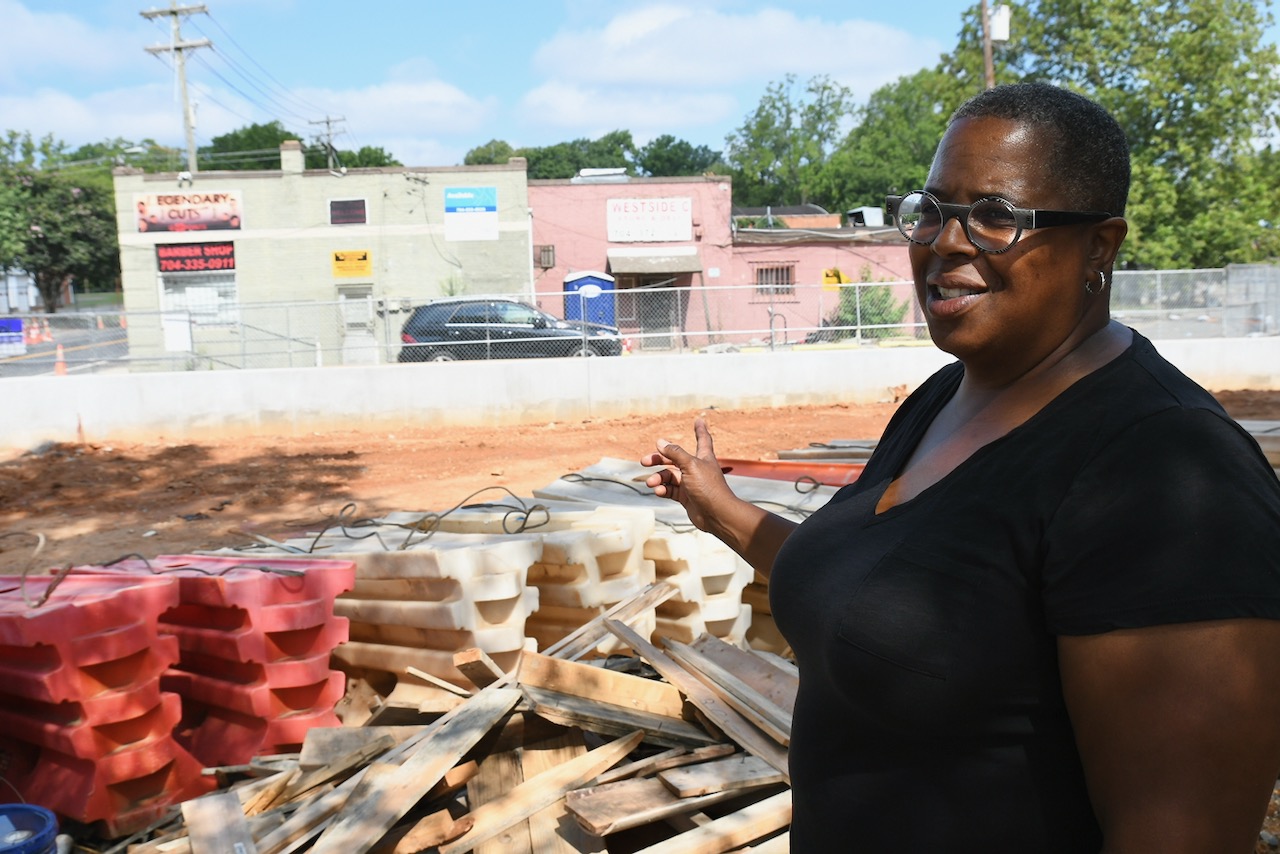 Dianna Ward, the majority owner of a real estate investment company, is bringing new retail to a building she bought in late 2019. (Photo: QCity Metro)

Change Agents is an occasional feature that spotlights people who are working to bring about positive change in Charlotte’s Historic West End. This article is the first in that series.

“This is it,” Dianna Ward said as she stepped from her black SUV. “This is the building — 1800 Rozzelles Ferry Road.”

It had taken some doing, had triggered some stressful days, but finally, the Charlotte business owner had achieved her goal.

In December 2019, Ward, majority owner of a newly formed investment company, had beaten the odds to buy a small commercial building in the Five Points area of Historic West End. The group paid $1.2 million, according to property records.

Now, with the building under renovation, Ward and her partners are preparing to welcome their first three tenants — a pharmacy, a pizza restaurant and an ice cream shop — with room still for two additional stores.

In a city under constant remake, Ward is one of several Black business owners who have turned their focus to Charlotte’s West End corridor, an area rife with both promise and perils.

In Five Points, the promise is becoming more visible.

Less than 30 feet from Ward’s property line, the city of Charlotte is building Five Points Public Plaza, a $5.5 million gathering space for the neighborhoods that surround Johnson C. Smith University. The plaza will include a small amphitheater, a splash pad, outdoor seating and public art. The James S. and John. L. Knight Foundation has pledged nearly $400,000 to support community-based programming for the plaza.

Just beyond the plaza, the Charlotte Area Transit System (CATS) is building a stop on its CityLynx Gold Line, a 10-mile streetcar system that, when completed, will connect east and west Charlotte with the uptown business district nestled in between.

Business ventures were nothing new for Ward, who was born in New Mexico, the third of five children. After holding down several corporate jobs, including a few in banking, she launched her first business venture, Charlotte NC Tours, in 2009. She now runs similar tour operations in Greenville, S.C.; Chattanooga, Tenn.; and Kansas City, Mo.

Ward also once owned a 35% stake in a bike-share business in New Orleans, but when the ride-share company Uber offered to buy the company’s equipment, Ward decided to cash out. She used that money to launch Sankofa Partners LLC, along with two friends. (In the Twi language of Ghana, Sankofa translates to “go back and get it.”)

Ward said she grew up in a family where each child was nurtured to succeed.

“My parents would find what made us tick and exploit it,” she said. “What they found with me, although I played piano and guitar from the time I was in kindergarten all the way to college, was my love of investing.”

As a child, Ward said, she began buying mutual funds with help from a family acquaintance who sold securities.

“I just always knew that there was something inside of me that said, ‘You want to own something,’” she recalled. “My father always talked to me about investing and making sure that I had something that nobody could take from me.”

The building at 1800 Rozzelles Ferry Road has had many lives. According to Mecklenburg property records, it was previously owned by Willie Lee Starr, a Black woman, who bought it in 1984.

Ward said she had noticed the building long before she ever thought of buying it. So when she and her business partners decided to make an offer, she reached out to Starr’s son, Jerry McJunkins.

But buying a commercial property is nothing like buying a house, Ward soon discovered.

“There’s all of this stuff,” she said. “You’ve got to make sure that the soil is ok, all the environmental stuff. I mean, it was a holy terror to go through that process, so you have to make sure you’re actually getting a good investment.”

Ward estimates that she spent at least $40,000 in up-front costs with no guarantee the deal would go through.

And it almost didn’t.

After signing a contract signaling her intent to buy, Ward’s initial lender backed away 24 hours before the contract was set to expire, leaving Ward in danger of losing the property.

“I was riding my bike from Pittsburgh to Washington, D.C., and I stopped somewhere in the middle, and I was sobbing because I had put so much work into getting that deal,” she said. “It became more personal than anything.”

“I felt like, here’s this Black family that had trusted me to purchase this, and I had held it off the market that long. And I just had all of these, you know, woe-is-me kind of moments,” she recalled.

In her email, Ward offered to help the family find another buyer or come up with a plan to redevelop the property, and she said she’d do the work for free.

McJunkins wrote back, she said, assuring her that his mother wanted Ward to have the property — the family was willing to wait.

With help from J’Tanya Adams, who leads the economic development group Historic West End Partners, Ward was able to find a new lender, and within two weeks she was on her way to closing the deal.

Ward called Adams a “powerhouse,” a community force determined to make things happen along the corridor.

“She’s got a lot of passion, a lot of heart — a visionary, not afraid of hard work,” Adams said of Ward. “It was actually exciting to work with Dianna.”

With the purchase now behind her, Ward said she and her Sankofa co-investors are eager to welcome their first three tenants this fall. Coincidentally, she said, all are business owners of color — a former JCSU student who is opening her second ice cream shop, a Latino man who lives nearby and is expanding his pizza business, and Dr. Martez Prince, owner of Premier Pharmacy and Wellness Center, who got a visit from Oprah Winfrey in January when the media mogul stopped in Charlotte on her 2020 wellness tour.

With JCSU as a neighbor and all the redevelopment that’s coming nearby, Ward predicts the businesses will thrive, even during a slow economy.

“We weren’t going to put a five-star restaurant in here,” she said. “That can come with somebody else’s development down the road. We know that right now, ice cream, pizza, pharmacies are all doing well, so we went after the people we wanted.”

As for her own investment, Ward said she’s not expecting to make a quick buck.

“The goal is to create generational wealth,” she said. “I’d be lying if I said that five or 10 years down the road, this building isn’t going to be worth (considerably more.) But in the short term, it is just about helping to create community.”

Ward said she was disheartened to see economic development bypass Charlotte’s West End while so much was occurring in other parts of the city.

For all of her business experience, Ward said her venture into commercial property has been filled with lessons learned — chief among them, she said, is the need to surround yourself with a good team. Many of the people who helped her, she said, were not of the same race but were willing to share knowledge she lacked.

“I’ve had a bad team around me before,” Ward said. “It is incredibly important to have people you can work with that actually know what they’re talking about. You’re not just bringing them on because they’re a cousin or uncle or this is my best friend. You’ve got to surround yourself with people who know what they’re doing and people with integrity. I mean, you’re talking about a lot of money. ”