The N.C. rapper seems poised for a run in the NBA, and it should be in Buzz City. 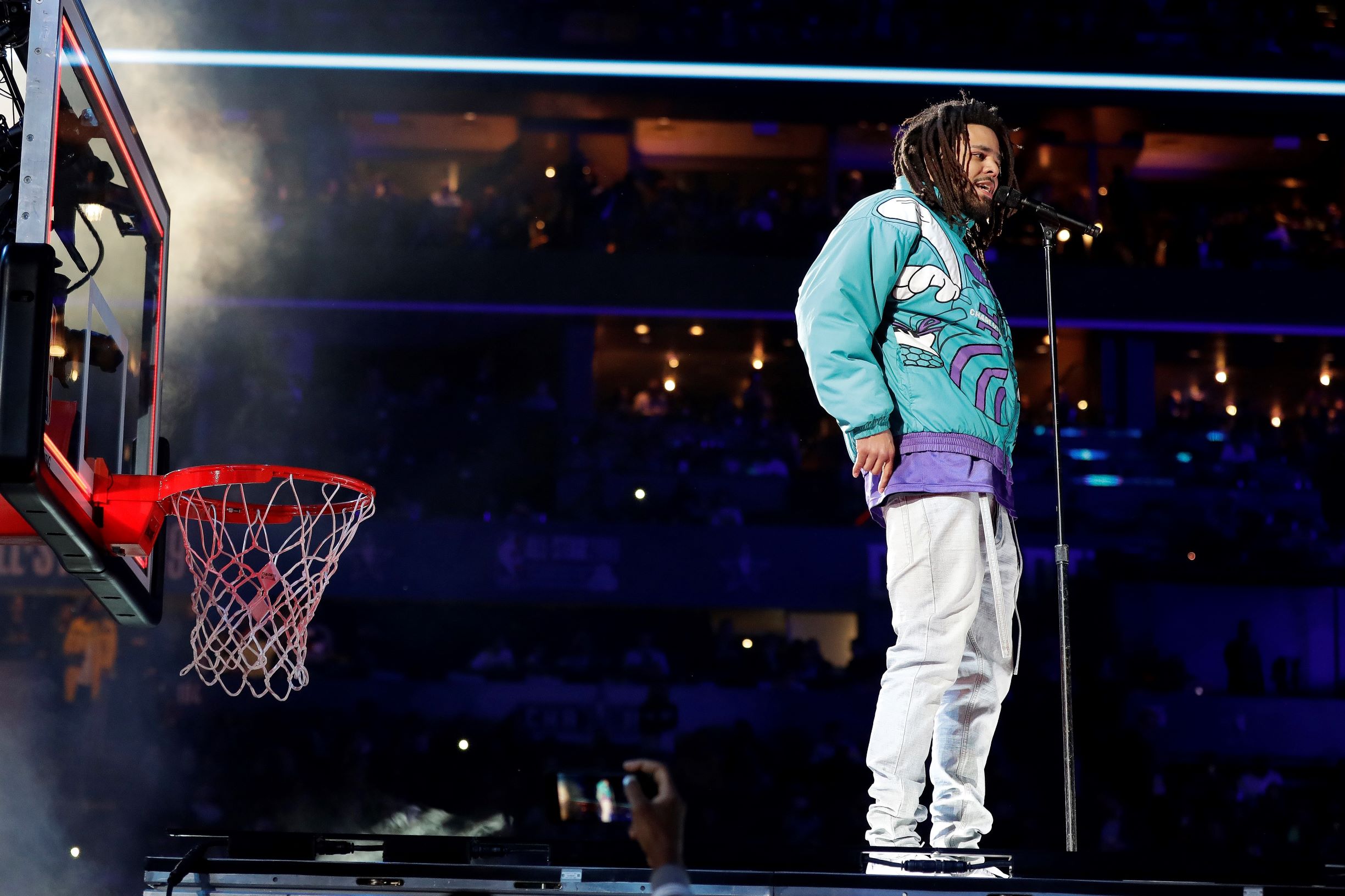 J. Cole is dropping hints that he wants to play professionally in the NBA. If the Grammy award-winning rapper from Fayetteville is serious about any affiliation with an NBA franchise, it only makes sense for Charlotte Hornets to bring him into Buzz City.

Cole has told us about his love for basketball in his lyrics and interviews throughout his career. In July, he chronicled his basketball journey in a piece in The Players’ Tribune. The 35-year-old discussed aging, ways he rekindled his drive for music, and career success. He shared his love for basketball, the ups and downs on his journey in the sport, and the morning where he reached a fork in the road between rap and basketball.

Getting back on the court the last few years helped him discover weaknesses in his game that needed improvement — particularly his jump shot. The 6’3 lyricist has shown glimpses of talent.

Videos of him training and playing games have circled the internet, and we’ve seen him participate in the NBA All-Star celebrity events. Cole also joined in on Black Ops Basketball, a summer training session and series of pickup games for NBA players. He’s had the chance to workout with players like Carmelo Anthony, Donovan Mitchell, Dennis Smith Jr., J.R. Smith, Lance Stephenson, T.J. Warren and Trae Young.

“I spent this time hooping,” said Cole in the Players’ Tribune. “Everyday. Wherever I could find a run, I was there. I even joined an adult league playing with dudes that had full time jobs and loved the game just as much as me. And slowly, the dream of playing professionally began to make its way back to the front of my mind…If you’re gonna do this, now is the time.”

Two weeks after the article dropped, Cole debuted his first signature basketball shoe with Puma. In a commercial promoting the shoe release, Cole is seen in the background taking shots with a trainer in an empty basketball gym. A tired, sweaty Cole is bent over in the foreground catching his breath. A voice is heard asking questions that allude to Cole preparing for an NBA tryout campaign.

The voice is New Orleans hip-hop mogul Percy “Master P” Miller. Master P, who signed NBA player contracts two decades ago, first with the Hornets in 1998 and then with the Toronto Raptors the following season, told TMZ Sports that Cole asked him for advice.

Miller was cut before the start of the regular season but would go on to play semi-pro basketball. He’s now president of Global Mixed Gender Basketball, a professional coed basketball league.

The Detroit Pistons invited J. Cole to try out, but the Hornets need to take care of home and keep him in the Hive.

Before diving further into the conversation, we must keep in mind how incredibly difficult it is to make it into the NBA. The last guy on the roster of a last-place team will likely destroy you in a pickup game. They’re still professional athletes and highly competitive, so it would be naive to believe any franchise would hand over a spot to Cole. It’s something he would need to earn.

Last October, Cole visited the Hornets‘ training camp in Chapel Hill. Fully engaged with the experience, the Hornets were impressed and made him part of the team, going as far as presenting him with a jersey complete with his name on the back. Ironically, it was No. 15 — the number Master P wore when he was a Hornet and the number of former all-star guard Kemba Walker.

As Head Coach James Borrego handed him the jersey in front of the entire team, he told Cole, “You’re one of us.”

Nearly a year later, will the Hornets have the opportunity to make good on that statement?

The Hornets haven’t made a playoff appearance since 2016 and weren’t invited to the recently modified NBA season in the bubble at Disney’s Wide World of Sports in Orlando, Florida. The team’s season is done; the franchise finished ninth in the Eastern Conference with a 23- 42 record.

Cole joining the team would contradict Charlotte’s youth movement, led by the emergence of second-year point guard Devonte’ Graham. During the season, we saw a pair of team veterans and former number two overall picks cut — Marvin Williams and Michael Kidd-Gilchrist. There’s currently only one player on the roster over the age of 30, Nic Batum (31).

With the departure of Walker and other familiar faces, the Hornets could use additional ways to excite the fan base. J. Cole might be a solution. Whether as part of the primary team or the Swarm, the Hornets’ G-league team, Cole would attract attention. Whenever fans can return to watch games live, people would flock to see him.

If Cole tries out and doesn’t make the team, it would be beneficial to convince him to stay involved with the franchise. From basketball players releasing rap albums to rappers owning teams, basketball and hip-hop culture have long been intertwined.

The thought of J. Cole developing into a Charlotte Hornets team ambassador would be a sight to see. It’s not far-fetched; rappers Drake and Travis Scott have done similarly with their home teams, Toronto Raptors and Houston Rockets respectively.

Nonetheless , I’d rather see J. Cole — along with DaBaby, Anthony Hamilton and other local celebrities — consistently at the Spectrum Center playfully trash-talking opposing NBA players during a game than Purple Shirt Guy.