The ‘Rose’ that grew during a pandemic

After sowing a seed in 2017, Taylor Jackson’s Redd Rose Vodka brand is flourishing as online sales increase during the national shutdown. 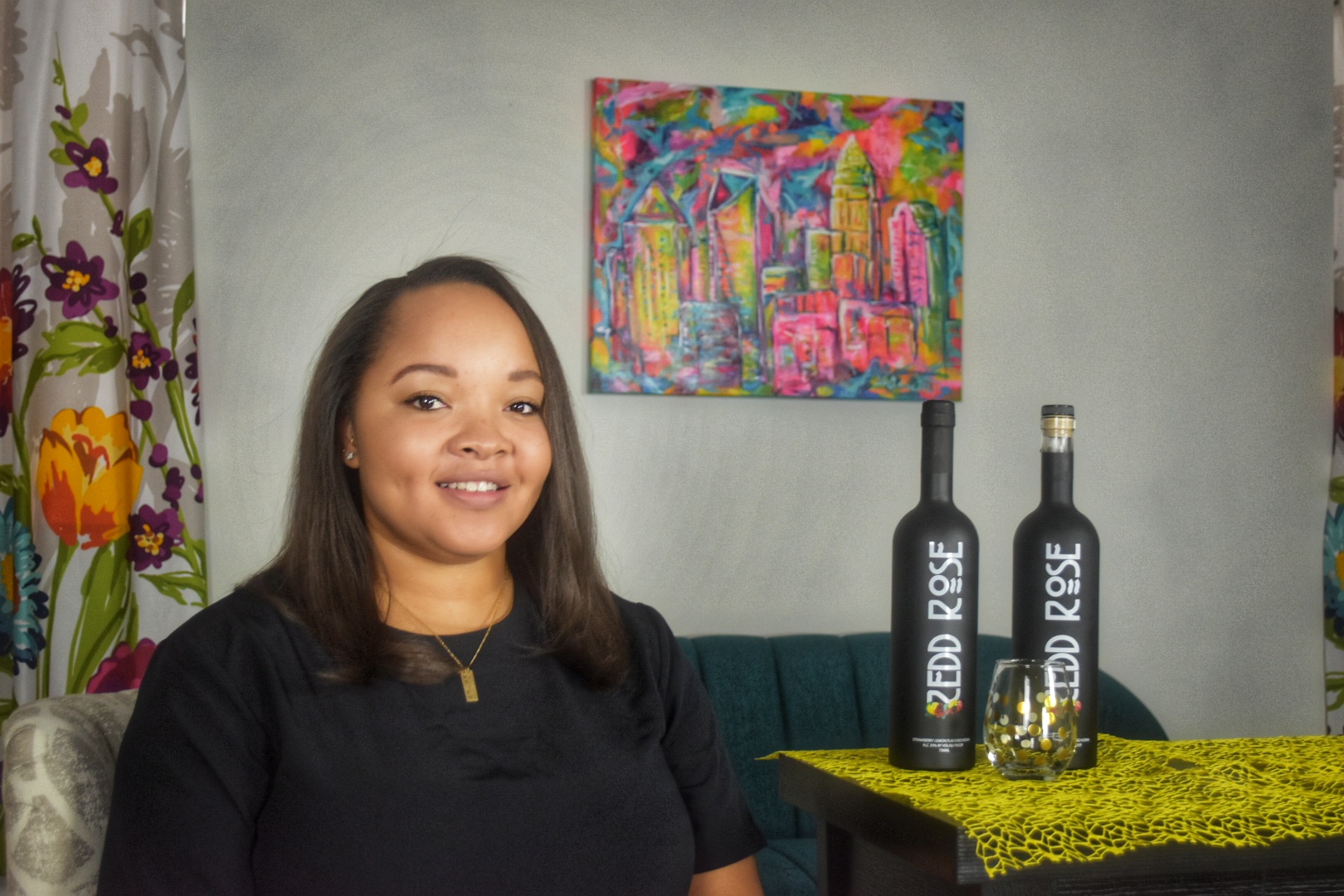 In April, weeks into the Covid-19 pandemic, Taylor Jackson embarked on a two-day, four-city trip — from Charlotte to Knoxville, then to Miami and up to Atlanta before returning to Charlotte. The road trip was one of many the solopreneur has made recently to show appreciation for the growing number of customers who have “found their inner rose” and are supporting her liquor brand, Redd Rose Vodka.

That month, Jackson set a goal to sell 100 bottles of her flavored vodka online. By the time she arrived back in Charlotte, she had surpassed that goal by more than 30 bottles.

The Ohio native’s journey to Redd Rose Vodka began seven years ago in Cincinnati, where she was in the legal field working for a district court judge who was ready to retire. Once her mentor officially put down her gavel, Jackson decided it was time to put down roots in another state, packing up her car and heading to North Carolina.

“I knew I didn’t want to work for any other judge,” she recalls about her decision to leave her hometown without a job. “They weren’t going to treat me like she did, so I packed up and left, and landed in Mooresville.”

Once in the Charlotte area, she took up bartending, and in a short time, discovered her passion for mixing drinks. After becoming a master mixologist in 2017, Jackson wanted to do more. She founded Pour Mixology, a cocktail catering company, and simultaneously set her sights on launching a tequila brand.

“I’m not much of a drinker, but if I’m drinking anything, it would be tequila,” the 29-year-old confessed with a smile. “That’s where I wanted to go with the brand. After doing more research and attempting to get started, I discovered that tequila is a lot more complicated than I thought. Vodka was the next best avenue, so I decided to focus my attention there.”

She recalls reading articles about the success of Ciroc, a vodka brand owned by Diageo, and the independently owned Tito’s Vodka. According to Statista.com, revenue from vodka sales amounts to more than $18 million annually in the U.S., with revenues expected to grow by 8.3% each year.

Jackson understood that vodka was the way to go. Now, she needed a partner to help with mixing and distribution.

“It was a really interesting journey,” she sighed. “There was no one to tell me how to get through the process. There was nobody there to tell me where to start, how to start, what the cost would be, what to do or not to do.”

She continued: “Everything I’ve done to this point, I’ve done on my own. So there’s been a lot of time spent on the computer and on the phone making calls, figuring it out.”

Eventually, Jackson found a company based in Florida that embraced her vision and offered to assist with mixing and distribution.

Inspiration behind the brand

When the time came to name the brand, it was an easy decision.

She was inspired by her grandmother, Rose-Mary “Redd Rose” Jackson, a “first generational woman that started her business in a non-traditional way.” Her grandmother used recycling as a way to feed her family and keep a roof over their heads.

“She’s the strongest person I’ve ever known. She was a warrior, and a trendsetter,” Jackson expressed about her grandmother. “I wanted this brand to represent all women, but especially my grandmother. I wasn’t there for her last birthday, so I wasn’t there to celebrate her. That made me want to do something for her, and what better way to celebrate her life and legacy than by doing something I know. And I know liquor.”

Putting a legal mind to work

Redd Rose Vodka is a corn-based, GMO-free, strawberry lemon-flavored vodka. The decision for a flavored option was intentional, the idea was that people could enjoy the libation without shopping around for mixers or chasers.

Although the brand officially launched in 2017, Jackson didn’t sell her first bottle until January this year. And that was to a family member.

With so many obstacles along the way, Jackson notes that her skills as a lawyer have helped to navigate through most of her roadblocks.

“Reading is a big part of being in the liquor industry,” she stressed. “There are 50 states, and all 50 states have their own liquor laws. Seventeen of those states, which includes North Carolina, are controlled, which means they have even stricter laws than others.”

Being in the legal field, she says, helped her confidence when speaking to alcoholic beverage control (ABC) boards.

“It’s helped me better understand the laws and know who to talk to and what they’re looking for as far as brands,” said Jackson, whose ultimate goal is to sit for the bar exam.

Her initial meeting with the North Carolina ABC board garnered mixed reactions.

“They loved me as a person, and they loved the vodka but told me they needed to see more sales before I’m able to be placed in their ABC stores,” she said.

Those remarks forced Jackson to move her operations online. Currently, Redd Rose Vodka is available in 22 states at a price point of $24.99 per bottle. In Florida, it’s sold in three stores and two bars.

Throughout the pandemic, she’s gradually built a customer base and increased her sales each month by marketing heavily on Facebook and Instagram.

“It’s been really word-of-mouth that’s helped with the sales,” Jackson explained. “People have been looking for ways to replace their bar experience, and when they’ve seen Redd Rose online, they become curious and give us a try.”

April’s sales of more than 130 bottles grew to 160 bottles in May, with even more sold in June. With the increased sales, the solopreneur probably won’t be taking many cross-state mini-tours soon.

When asked what’s next, Jackson smiled and hinted that there are more flavors on the way.