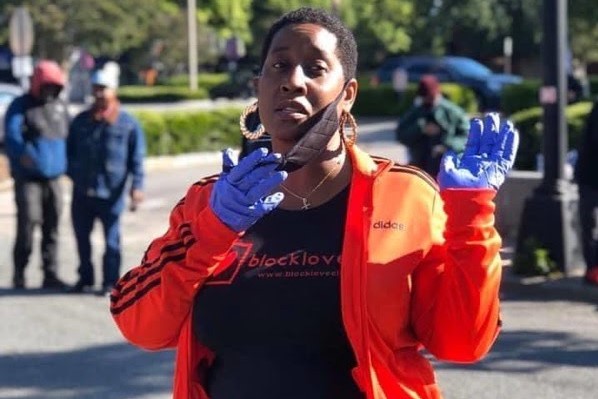 Tents will take over uptown Charlotte on Aug. 15 as community groups and volunteers plan to sleep outdoors in efforts to raise $100,000 for Charlotte’s low-income and homeless populations.

Deborah Woolard, founder of Block Love Charlotte, says the “sleep-in” fundraiser is in solidarity with the homeless encampment along North Tryon Street, known as “Tent City,” to provide resources for and raise awareness about the city’s most vulnerable.

“The need is probably greater than we can imagine,” said Woolard, who started her organization three years ago. “Prior to Covid-19, we were meeting needs in the uptown area, and that need has grown, especially with the loss of jobs and furloughs.”

Her idea to give back and help others relates to her own experiences with homelessness.

“I was once homeless myself on multiple occasions,” she said. “I really want to be that hand that I myself once needed. I want to reach out to others.”

There were 3,111 people actively experiencing homelessness in Mecklenburg County as of June 30, according to county data. Since the coronavirus outbreak, Woolard says she’s seen a growing demand from people in need of meals, groceries and necessities like toiletries and sleeping bags. It’s a big reason why Block Love Charlotte — named for the area at the corner of North Tryon Street and Phifer Avenue where people experiencing homelessness are known to congregate — has stepped up its service.

“When a lot of nonprofits had to pull back because of Covid-19 … we still remained out here because the need doesn’t stop just because we’re in the midst of a pandemic,” she said.

On Saturdays, they pick new locations for a pop-up lunch and to distribute essential items. On the group’s Facebook page, Woolard noted that the organization has served each day, sometimes multiple times a day, since March 8.

Volunteers have been consistent despite donations going up and down. Woolard explained that it was hard to get donations in the beginning. She believes the uncertainty surrounding Covid-19 played a role, but donations from private citizens increased once they saw the group’s impact.

Donations have also come via an Amazon wishlist, which Woolard says “has really been a Godsend.”

Her team has made up shortcomings through collaborations with other advocacy groups, like the Community Hub in north Charlotte, and churches who step up by donating staples like juice, milk and bread.

“Anytime we don’t see those financial donations pouring in, we still have physical items and are able to make really good use,” she said.

With August being Black Philanthropy Month, and the signaling of a colder season ahead, Woolard expects more people to need resources. In turn, she says Block Love Charlotte will need more resources to help them.

“Philanthropy really is just that spirit of giving, and it’s not always financial,” she explained.

Woolard points to some of Block Love Charlotte’s volunteers — she calls them the base of the organization — who themselves have been furloughed or in need.

“They say, ‘Deb, you know I’m going to donate my time.’ A lot of times, we think it’s about something financial, but giving is so much more,” she said. “It’s giving of your time, your talents and your treasure.”