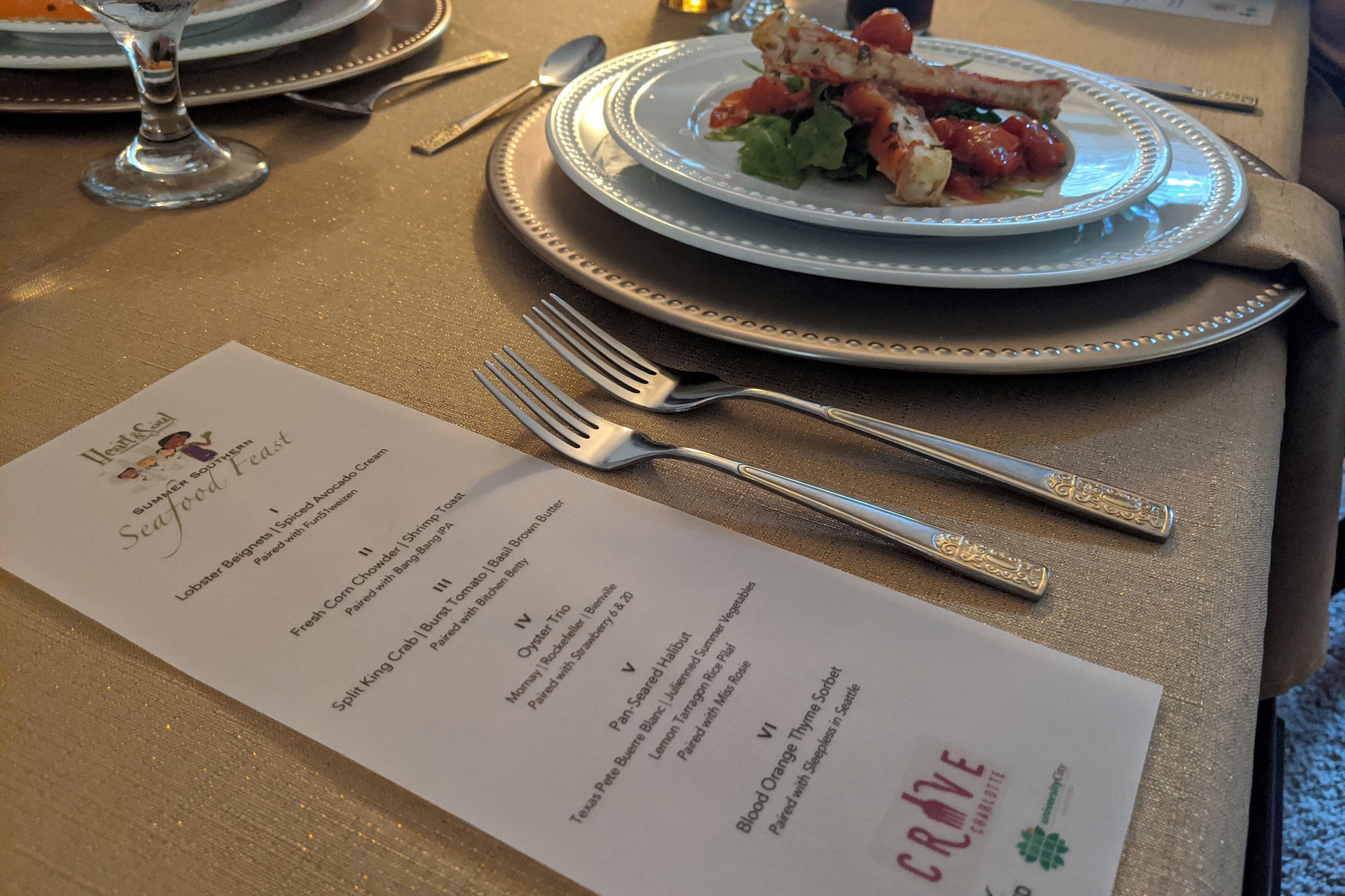 Chef Lisa Brooks’ staff quickly paced back and forth in the kitchen working as a dozen guests held conversations over music and sounds of clanking silverware.

This wasn’t the scene from your favorite Charlotte restaurant, but rather Brooks’ University City home on Saturday as she hosted a six-course Summer Southern Seafood Feast. The event was one of 16 culinary experiences part of Crave Charlotte, a new food, wine and mixology festival.

“I’m actually happy things had to change to a smaller setting because this is my world,” Brooks said while her chefs began plating the third course, split king crab with burst tomato and topped with basil brown butter. “I do small dinner parties, so this works well for me. It allows me to truly showcase what I do.”

Crave Charlotte was originally scheduled to take place in May but scaled back as a result of the Covid-19 pandemic. The main event, which was supposed to feature several chefs in an outdoor exhibition at Romare Bearden Park, was scrapped due to the statewide order banning large gatherings. Instead, event organizers opted for limited-capacity events throughout several Charlotte neighborhoods held July 21-26.

Turning a passion into a profession

Growing up, Brooks’ family matriarchs — her mother, grandmother and great-grandmother — helped develop her passion for cooking. After the former healthcare IT professional moved back to her native Charlotte from Chapel Hill, she entered the culinary program at Central Piedmont Community College. In 2010, she established Heart & Soul Personal Chef Service, where she serves as executive chef.

Catering services are on the rise in the food industry, accounting for more than $60 billion in sales as reported by Restaurant Business. Brooks has been among the flourishing business owners in Charlotte over the last few years.

Despite the challenges of the coronavirus, her business is thriving.

“We’re in the middle of a pandemic, and our business has soared through the roof,” she said. “What we do is needed more now than ever. People still want to celebrate — there’s anniversaries and birthdays, but they can’t be out in large groups. For us, to be able to come into people’s homes and to be able to help is just a total blessing.”

According to the U.S. Bureau of Labor Statistics, Blacks and women are the least represented groups among chefs and head cooks in the culinary industry. Among minorities, Black chefs and head cooks comprise 14.3% of the industry, trailing their Latinx (26%) and Asian (16%) counterparts. Women represent 22%.

Brooks is driven to impact the future of the industry, beginning with employing more Black female chefs. Her staff currently includes five. Thinking about how the lineage of women in her life inspired her love for cooking, she feels good about the legacy she’s building with other Black female chefs.

“I’ve trained them up to be able to captain events, so I am stepping out of the kitchen except for certain events I throw,” she shared.

Brooks plans to focus her energy on a couple of other projects including the expansion of her business into the Triangle area, a cookbook and a digital information product on how to become a successful personal chef. She felt compelled to help after the pandemic victimized a number of her colleagues.

“I saw the entire food industry get laid off within the last three months,” she said. “I want to create content to teach people, wherever they are, how to do exactly what we’re doing and give them the playbook.”