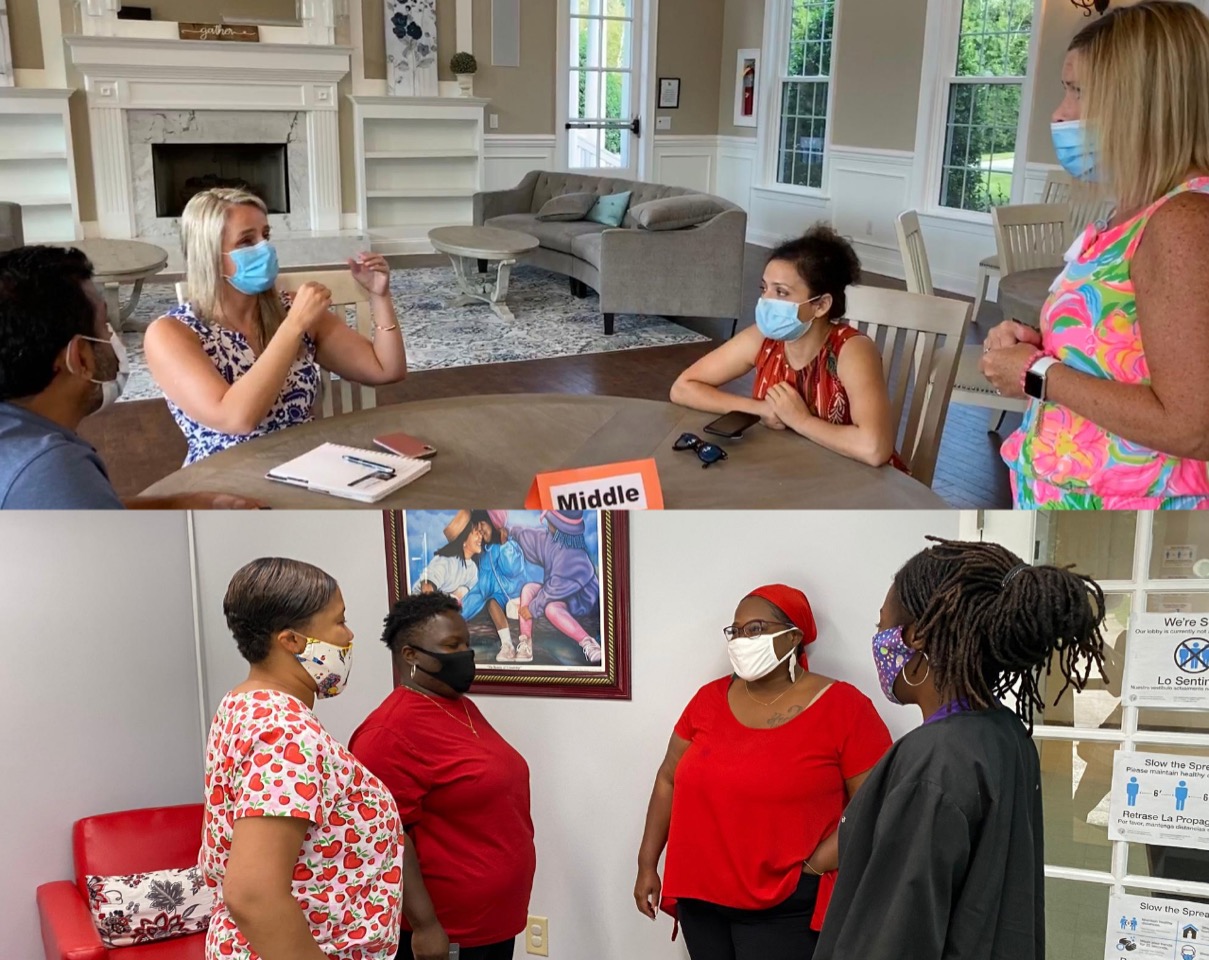 Top: Parents in the Ballantyne community of Bridgehampton talk about how they can form groups and hire teachers to help their children through online learning at a meeting called by Karen Mullane (right). Bottom: Some moms who work at Bright Future Learning Center in west Charlotte are leaning on family or are still struggling to find childcare for their own children before remote learning starts next month. Mom of five Michelle Norman (left) is most worried about her 12-year-old who has cerebral palsy.

In an expansive and airy neighborhood clubhouse in Ballantyne, about 40 parents gather on a Sunday afternoon to talk about the online school year that lies ahead.

The parents — mostly moms, some in sundresses, some in workout clothes or just out of the pool — are here at the invitation of Karen Mullane, a kindergarten teacher and mom of two who lives in this Bridgehampton community of about 550 homes that straddles the N.C.-S.C. state line.

Mullane invites the crowd to break into groups: “It might be advantageous for those of us who might have an education background or might have some expertise in areas, whether you’re an English major or a calculus major, just to kind of help support one another and to help develop what I’m calling ‘micro-classrooms.’”

Besides focusing on academics, neighbors should try to “get everybody socializing as much as learning,” Mullane says. “I think that emotional component for our children is so, so important, and we’re missing so much right now.”

As a society, there’s been so much to cope with as the pandemic takes its twists and turns, and this newest challenge appears to be the most defining yet: how we will educate our children at a time when most students are locked out of the classroom.

Hop in the car in Bridgehampton and drive 18 miles west, toward Wilkinson Boulevard in west Charlotte, and the conversation of how to help our kids is starkly different.

For many parents there, the worries are far more basic, and concerns about their kids’ socialization feel like a luxury. Without the safety nets that money, internet connectivity and vast social networks provide, staying academically on track is not a given.

Gloria Dukes runs a daycare center, a summer camp and an after-school program that cater to families in poverty who receive government childcare subsidies. She’s been receiving daily calls from parents who need her to keep her camp doors open once school starts, so their school-aged kids can have supervision while they work.

On Wednesday, Dukes got an email from the N.C. Department of Health and Human Services, asking if she could keep her Bright Future Enrichment Center running full-time during the school year for kids in kindergarten through age 13 who’ll be doing remote learning.

She’s knows the need is there, and she’s hustling to make it happen.

Dukes is hiring bus drivers and CMS teacher assistants who will be out of work when Charlotte-Mecklenburg Schools switches to all-remote learning on Aug. 31. They’ll care for up to 64 children at Moore’s Sanctuary African Methodist Episcopal Zion Church, where Dukes holds her summer camps and after-school program. She’s already making plans to transform empty church classrooms into computer labs.

“These parents are stressed, because where do they go?” Dukes says, standing in her daycare center on a recent morning. “If they stay home, it’s ‘I have to give up my job and I’m already on a fixed income. I can’t give my job up. I need to get rent and food for my children.’ It’s going to be a balancing act for them.”

Charlotte has always had social and economic disparities, but the decision last week by Charlotte-Mecklenburg Schools to keep school buildings shut due to Covid-19 could amplify them.

A June study examining the disparate effects of virtual learning by Harvard University’s Raj Chetty, who authored the 2014 study that ranked Charlotte 50th out of 50 large cities in upward mobility, gave a bleak outlook: “COVID-19 may reduce social mobility and ultimately further amplify inequality by having particularly negative effects on human capital development for lower-income children.”

Guidance this week from the Centers for Disease Control and Prevention on reopening schools cited the Chetty study and warned of the dangers of keeping schools closed: “Disparities in educational outcomes caused by school closures are a particular concern for low-income and minority students and students with disabilities. … Persistent achievement gaps that already existed before Covid-19, such as disparities across income levels and races, can worsen and cause serious, hard-to-repair damage to children’s education outcomes.”

In wealthy areas of Charlotte, certified teachers with advanced degrees are hiring themselves out to individual families. Entrepreneurs are scaling up learning enrichment companies, offering parents concierge access to specialized teachers at price tags out of reach for those with low incomes.

For economically struggling families, community groups such as the Salvation Army’s Boys & Girls Clubs are offering childcare at free or reduced rates. But child advocates say there won’t be enough spots for all the families that need them.

No plan: The result is that many children will be home alone with shoddy internet connections and a lack of supervision from parents who have to report to essential jobs. There’s been no major plan rolled out by county or school officials about how to help families facing a childcare crisis.

Disparities in internet access are striking, too. A map showing internet connectivity by census track falls into the usual wedge-and-crescent pattern, with the wealthy south Charlotte wedge having almost all homes connected, while others in the crescent having spottier coverage. In one census tract north of uptown between Beatties Ford Road and I-77, 48% of households lacked internet service.

Pat Millen, founder and president of Charlotte-based non-profit E2D – Eliminate the Digital Divide, which gives computers to needy families, said a silver lining to the pandemic is that more people are aware of the fact that large swaths of Charlotte lack internet access.

“A lot of people have said to me, ‘Holy smokes, the digital divide has just gotten out of control’ in regards to coronavirus,” he said, “to which I say, ‘It hasn’t grown at all, we’re just more aware of it, because we see in great relief the disparate impact that occurs if you don’t have access.”

At the Sunday meeting in Bridgehampton, Kristie Wagar, mom of a rising kindergartener and fourth grader, connected with fellow parents of rising-kindergartners, and within days, she and three other families had organized a “micro-classroom” that will rotate between their homes two days a week.

They lined up an out-of-work teacher who will go to their homes from 9 a.m. to 3 p.m. to oversee online learning and activities. The other three days a week, her kindergartener will attend Leaf Spring childcare center, which is expanding to offer care for older children who are doing online learning.

Wagar and her husband both works full time — she in commercial real estate and he in healthcare. Both will be working from home for the foreseeable future, “but we are, literally, 8-to-5 on calls and meetings all day.”

Switching to private school: Mullane, who called the meeting and who teaches kindergarten at a CMS school, is pulling her own children from public school this year and sending them to St. Matthew Catholic School, which is offering in-person, daily instruction this fall.

Her rising fourth and fifth graders have been attending Harrisburg Elementary, just over the South Carolina border. (The family lives on the South Carolina side of Bridgehampton.) Putting the kids in Catholic school was an idea Mullane and her husband had mulled for years, but last spring was the final straw.

“After last year’s debacle, I feel like my kids are missing the basics,” Mullane said. “They say 70% of your basic knowledge comes from fourth grade, and my fourth grader didn’t get it.

“I had a teacher Zoom from her bed,” Mullane said. “They played ‘truth or dare’ one day. They played ‘two truths and a lie.’ There was no teaching.”

West Charlotte: Who will watch the kids?

At Gloria Dukes’ childcare centers on the west side, it isn’t only the parents of the children they care for who are stressed — the staff is stressed and stretched, too.

Keshia McKinley, the nutrition specialist who’s in charge of the meals and snacks at the daycare, plans to drive her third-grader to her sister’s house in Mooresville every day for supervision of online learning once school starts.

Daycare teacher Michelle Norman has four daughters aged 7 to 13 in addition to a daughter in college, and she’s still trying to figure out who will supervise their learning while she’s working at the daycare and her husband works his full-time job in social services.

What keeps Norman up at night, she says, are worries about her 12-year-old daughter Nyasia, who’s going into seventh grade and has cerebral palsy. Last spring, the abrupt switch to virtual learning and the lack of a consistent school schedule caused Nyasia to fall into a depression.

Nyasia needs constant help in school to retain information, and Norman has been looking for a tutor or a high school student who can come in and help her. So far she hasn’t had luck.

Figuring out how she’ll pay for a tutor or babysitter “is a problem as well, but I feel like, I’ll deal with it when I get to it.”

Recently, the high-school daughter of a co-worker at the daycare offered to swing by Norman’s house on school days to check on her children if all else fails. Norman hesitates to take her up on it, knowing the the high schooler will have enough on her own plate.

“You figure out one problem,” she said, “and it just creates another problem.”

This article was produced by The Charlotte Ledger, which is working with local media partners WFAE, Qcitymetro and La Noticia to cover the economic effects of the coronavirus on minority communities in Charlotte. The effort is funded in part by the Facebook Journalism Project.