Despite a federal moratorium which remains in place, legal professionals, housing experts and advocates say a wave of evictions in North Carolina is imminent. 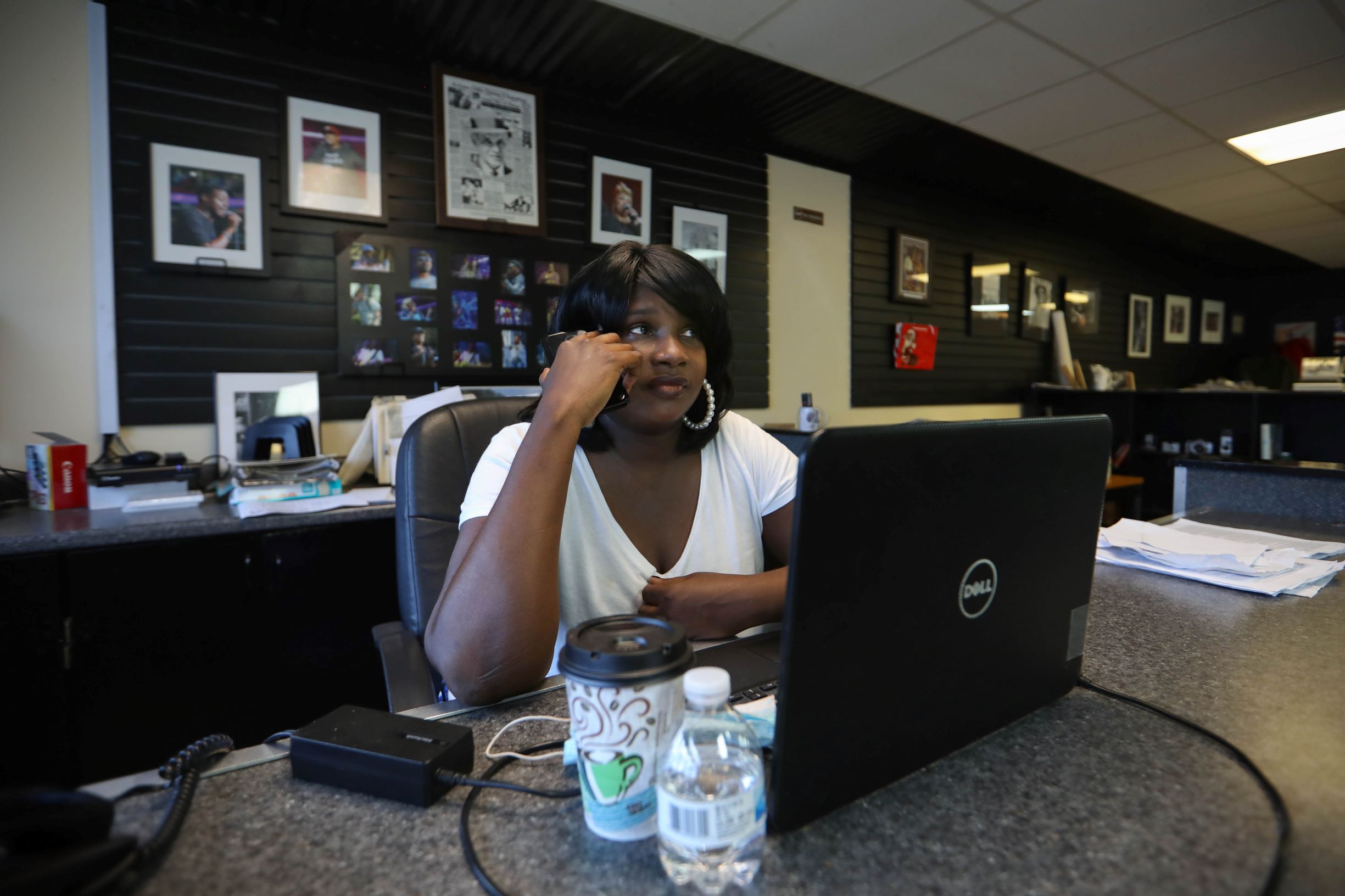 Kimberly Muktarian takes a call at her desk in the newsroom of The Carolinian, an 80-year-old Black-focused newspaper, on July 10, 2020. The newsroom is where she does the majority of her advocacy work for Save Our Sons and Stand in the Gap for a Neighbor. Photo by Anton L. Delgado | NC News Intern Corps

Red and white “For Rent” signs have yet to crop up on lawns in Southeast Raleigh, but Kimberly Muktarian, a lifelong resident of the area, is expecting they will soon.

For the last few months, a statewide eviction moratorium has kept residents safely in their homes. Gov. Roy Cooper created the moratorium by executive order on May 30, but it expired on June 21.

“The moratorium was lifted prematurely, and it really should have been reconsidered,” Muktarian said. “We’re still having Covid issues and we are still struggling. It wasn’t given enough consideration and now it has left people in both physical and economic danger.”

Despite a federal moratorium which remains in place, legal professionals, housing experts and advocates say a wave of evictions in North Carolina is imminent.

“What we know about people who experience evictions is that it’s often the beginning of a journey to worse and worse housing conditions,” said Samuel Gunter, executive director of the North Carolina Housing Coalition. “You’re forcibly removing people from their homes during a crisis. That’s especially terrible because it didn’t have to be this way. We could have gotten systems in place to help folks out.”

Coupled with the continued spread of the coronavirus, Gunter says the effect of mass evictions could be felt for the rest of the year.

“In order to shelter at home, you’ve got to have a home to shelter in,” Gunter said. “Having a home base is critical in the midst of a global pandemic, that’s why we set up the moratorium in the first place.”

The state moratorium prevented eviction hearings, but did not stop landlords from bringing those cases to court — leading to a backlog of over 10,000 cases throughout the state.

The federal eviction moratorium only applies to renters whose landlords have federally backed mortgages. Property owners filing eviction cases in state courts are required to provide an affidavit showing that their property is not federally financed.

ProPublica set up a database that allows residents to search their addresses and see whether or not they fall into this category.

Emily Benfer, a visiting professor at the law schools in Wake Forest University and Columbia University, has been working in partnership with The Eviction Lab to track the different policies between states.

Benfer is spearheading the lab’s effort to rank states through a policy scorecard that would allow residents and lawmakers to compare different moratoriums. The scores are based on emergency orders, declarations and legislation.

North Carolina ranks among the bottom 15 states with a 0.19 score out of 5.00 — ranking above other Southern states, including Georgia, West Virginia, Alabama, Louisiana and Tennessee.

“North Carolina is near the bottom of the country because of its approach,” Benfer said, referring to the moratorium expiration and lack of rent and mortgage support. “Without further action, the state can definitely expect to see a surge of evictions related to the pandemic. That will lead to long-term consequences to society, medical care, child welfare and public health.”

The scorecard is based on 22 policies that if practiced would lead to a higher score. North Carolina practices five of the policies: CARES certification required, no utility disconnection, free utility reconnection, grace period to pay rent and no late fees.

“In order to be effective, moratoriums need to be backed by short-term support,” Benfer said. “Things like extending the moratorium past the emergency declaration, refusing to allow utilities to stop, allowing longer grace periods and not reporting to credit bureaus are all short-term things that could really help.”

In 2018, the lab launched the first national evictions database with the goal of giving residents and lawmakers accurate housing information.

“Evictions, homelessness, housing market crashes are all preventable issues,” Benfer said. “The question remains, are we as a society going to choose to put this issue first and ensure housing is an essential component of being American?”

There are over 3.3 million renters across the state, according to the lab’s data.

“Our research has shown that there are communities that are disproportionately affected by eviction,” said Alieza Durana, a narrative change liaison at the lab. “This is caused by systemic discrimination in our housing system, which specifically targets Black and Hispanics.”

To aid these communities, the Civil Legal Assistance Clinic at the UNC School of Law partnered with Siembra NC to launch a Spanish hotline — 919-590-9165 — that provides legal aid and informational packets to those facing evictions.

“[The goal is] to help Latino tenants defend their rights,” said Andrew Willis Garcés, director of Siembra NC. “Informed tenants are less likely to be taken advantage of and more likely to assert their rights.”

Within the first week of the clinic, which started on June 22, the clinic received more than 85 calls or texts from people asking for assistance.

“The clinic is not in the position to take on direct representation of clients in eviction proceedings, so we tried to think about being of assistance to people short of that,” said Kathryn Sabbeth, a UNC associate professor of law. “This information line as a way to be realistic about the fact that there are not enough lawyers to represent the tenants that are probably going to be facing eviction in North Carolina. We wanted to provide some resources for folks going by themselves.”

Since the UNC School of Law is currently in summer session, there are no students working at the clinic, leaving it short staffed.

“The demand is already outpacing our ability to do the work. Sending informational packets takes a lot of time,” Sabbeth said. “We are hopeful but not confident we will be able to serve the need as the numbers continue to grow.

“It’s sort of absurd that we are sending people these information packets that, if I’m being honest, I certainly hope are useful to people, but it’s really a lot to put on someone. To expect someone without a lawyer to navigate this complex law and argue for themselves by themselves.”

According to Sabbeth, evictions are a “racial justice and gender justice issue in terms of who is affected.”

Muktarian, president of Save Our Sons, has been working to address the racial justice component of evictions in her Southeast Raleigh neighborhood.

Working alongside other local groups, Muktarian helped launch the Stand in the Gap for a Neighbor Campaign, which in the last month has raised over $18,000 in donations to help those struggling to pay rent.

“Covid is attacking minorities at a substantial rate, meaning so are evictions. We wanted to make sure we provided a cushion,” Muktarian said. “Housing is a human right; it is not a religious right or a race right. We are helping everyone because we believe humanity should be covered, sheltered and protected.”

The NC News Intern Corps is a program of the NC Local News Workshop, funded by the North Carolina Local News Lab Fund and housed at Elon University’s School of Communications.

This Story is Tagged: coronavirus