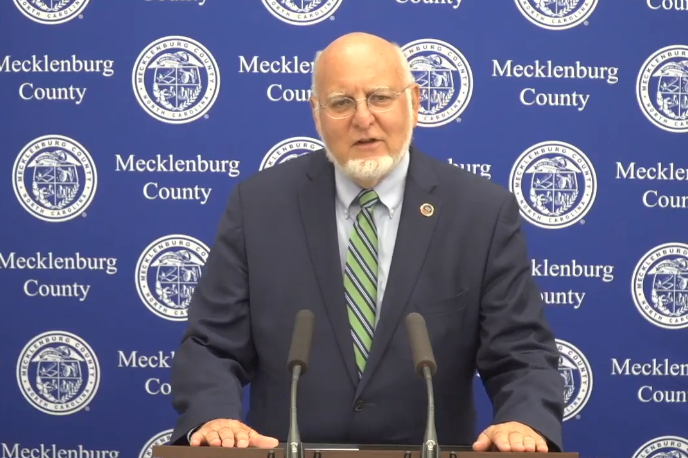 Dr. Robert Redfield, director of the Centers for Disease Control and Prevention, speaks with reporters during a virtual press conference on July 13, 2020. Photo via screenshot

Mecklenburg County officials are considering measures similar to the South Carolina governor’s order to shut off late-night alcohol sales to curtail risky behavior and slow the spread of Covid-19.

During Tuesday’s virtual press conference, County Manager Dena Diorio said officials discussed actions in both Orange County and South Carolina that close alcohol sales after 10 p.m. at restaurants and bars, but they aren’t ready to make a recommendation yet for Mecklenburg. She also said there are no formal discussions about a wider shutdown at this point.

Dr. Robert Redfield, director of the Centers for Disease Control and Prevention, also took aim at some of the risky behavior seen recently on social media.

Redfield said he recognizes that certain businesses tend to facilitate irresponsible behavior, which is why he’s a “strong advocate” of closing bars and limiting patrons in restaurants to allow for social distancing.

Redfield, who was in town for a meeting with county officials, said he came to listen and learn from front-line health officials, especially with regards to how they are handling the disproportionate incidence of Covid-19 in the Hispanic community.

But he also delivered a clear and emphatic message: “We could drive this epidemic to the ground,” he stated, if everyone would wear a face covering for the next four to six weeks.

Redfield sounded that theme over and over during the news conference that also included Mecklenbug Public Health Director Gibbie Harris.

Mecklenburg’s rising numbers are not as concerning as the strong outbreaks in South Carolina, Florida, Texas, Arizona and southern California, Redfield said, noting that these spikes are being driven by more infections among Millenials and Gen Xers.

For those under the age of 25, this virus is not going to cause significant morbidity, Redfield said, but he implored young people to protect the vulnerable — those with underlying health conditions and the elderly.

“The most important thing that I can ask the American public to do is to fully embrace face covering, fully embrace careful hand hygiene, and fully embrace social distancing,” Redfield said.

Redfield favors schools reopening with face-to-face instruction, citing their provision of mental health services, meals, mandatory child and sex abuse reporting and socialization. Keeping schools closed is a greater public health threat to K-12 students now than the virus, which causes limited morbidity to those under age 18, he said.

“It’s important that as we reopen schools, (we) must find a path to doing it safely,” Redfield said. The vulnerable among school children and teachers— those with underlying conditions — must be protected.

Harris said getting the schools reopened has to be a priority for the health and welfare of children. She called on everyone — including those without children — to wear face coverings, practice hand hygiene, and social distancing to get “our children back in school.”

Tests are taking five to 10 days to process, depending on the kind of test taken, because the labs do not have the capacity to keep up with the push for increased testing, Harris said. The county is working with state officials on solutions, such as looking for other labs, she said. The testing lag adds to the difficulties of pinpointing where outbreaks start, and contract tracers are finding it difficult to get people who tested positive to interact with them.

Harris said county officials have regular conversations with local hospital systems about regional capacity, and they are keeping an eye on the situation in South Carolina to make sure hospitals have the capacity they need. Diorio said they have not re-convened any discussions about a field hospital.