Malcolm Graham, who represents District 2 on Charlotte City Council, challenged city officials to get serious about crime on the corridor. His district includes Beatties Ford Road and Historic West End. 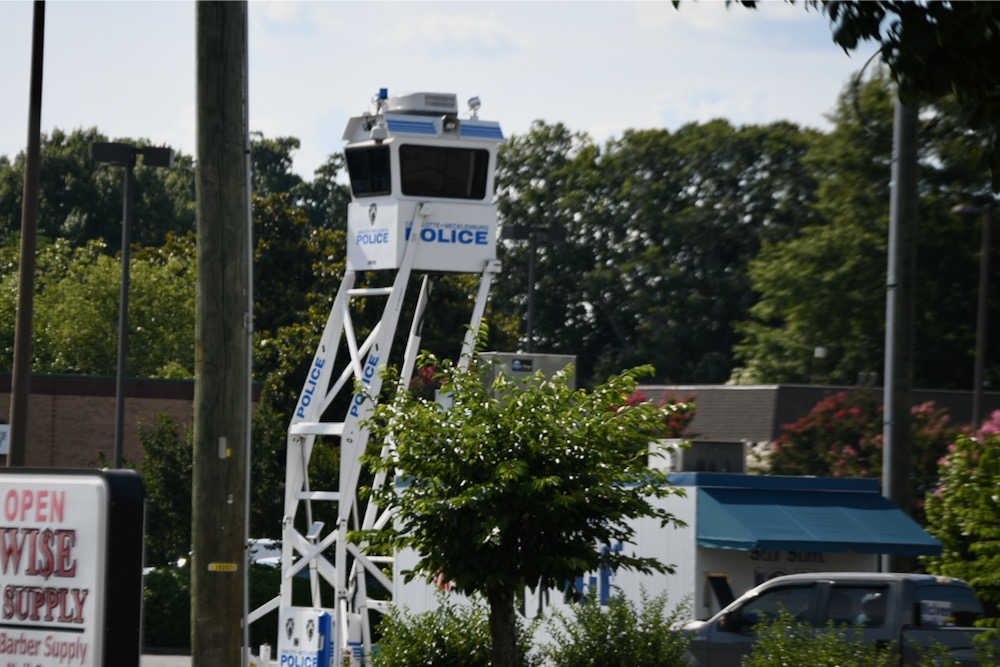 A CMPD observation tower has been erected near the site of recent deadly shootings on Beatties Ford Road. (Photo: QCity Metro_

City officials and elected leaders have pledged to address violent crime on a stretch of Beatties Ford Road where a 14-year-old boy was shot and killed last month and four people died days earlier after multiple people opened fired during a street party.

The effort is part of a larger initiative to address violent crime in four of Charlotte’s low-income corridors.

The section of Beatties Ford Road near LaSalle Street, however, has drawn more immediate attention, especially after the death of Terreon Geter, who was fatally wounded near an arcade. Geter, who played football at Ransom Middle School, would have been a high school freshman this fall.

“There’s no mystery around the fact that Beatties Ford Road, specifically, has been a hot spot for years,” city council member Malcolm Graham, who represents the area, said at last week’s council meeting.

Holding up a stack of papers that he said represented dozens of calls by residents and business owners seeking police assistance in that area, Graham demanded immediate action to address crime on Beatties Ford Road, and he questioned newly appointed Charlotte-Mecklenburg Police Chief Johnny Jennings about whether CMPD is doing enough.

“We only expect one thing on Beatties Ford Road,” Graham said, “and that is to protect and serve everybody and treat the corridor as though it was SouthPark…”

Jennings and Charlotte City Manager Marcus Jones said they’d report back to the council on Monday.

Graham asked, specifically, about the city’s legal authority to take possession of a parcel in the 3200 block of Beatties Ford Road where, he said, much of the crime had occurred – the same block where Geter was killed.

“They’re not washing cars on that block…,” Graham said at the meeting. “They have been selling drugs from that block for quite a long time. I think the urgency is now … for us to take some proactive action.”

After recording 107 homicides in 2019, Charlotte is on pace to top that number this year. According to CMPD reports, a disproportionate number of those killings have happened in four small areas that make up less than 2% of the city’s land mass – one being a section of Beatties Ford Road near Lasalle Street. (The other three areas are:  Central Avenue and North Sharon Amity Road, Nations Ford and Arrowood roads, and Interstate 85 and Sugar Creek Road.)

At Monday’s council meeting, Jones outlined a two-part pilot program, set to launch this fall, that city leaders hope will “disrupt” crime in those four corridors.

Under one part of the pilot, victims of violence would be identified in hospitals and offered “assessment, counseling and social support in order to reduce recidivism,” according to the city manager’s presentation.

Under a second program, outreach workers would focus on people at high risk of becoming involved with, or victims of, violent crime. They would then be offered services such as conflict mediation, case management and mentoring.

In the case of Beatties Ford Road, Graham said, the pilot’s proposed launch this fall would come too late. He pushed for a faster response and insisted that residents along Beatties Ford Road be invited to participate.

Graham later told QCity Metro that economic change is coming to the corridor and that the city must respond with affordable housing and social services such as treatment for substance abuse.

At the same time, he said, the police department must “intensely enforce laws.”

Ed Driggs, one of two Republicans on the 11-member council, said the city is sending mixed messages to the police.

“We are simultaneously asking CMPD to be more effective about law enforcement at the same time we are conducting this wide-ranging review of what they do, and we’re responding to calls for defunding them,” he said.” I don’t think that sends a very unified message.”

Driggs further suggested that CMPD officers may have been reluctant to act because of criticism the department received for using chemical agents during demonstrations that erupted in Charlotte following the killing of George Floyd in Minneapolis.

In his interview with QCity Metro, Graham agreed that CMPD officers might have been “gun shy” about breaking up the three-day street party that began as a Juneteenth celebration and ended with street racing, more than 180 shots being fired, and the deaths of four people. Still, he said, any plan to “disrupt” crime in Charlotte must begin with police enforcement.

“We need to send a strong message from this council, and certainly from this council member, that foolishness, crime, what happened that night, was not celebrating history and tradition; it was reckless disregard for human life,” he said during the council meeting.