Both men are asking witnesses to come forward and tell the police what they saw. 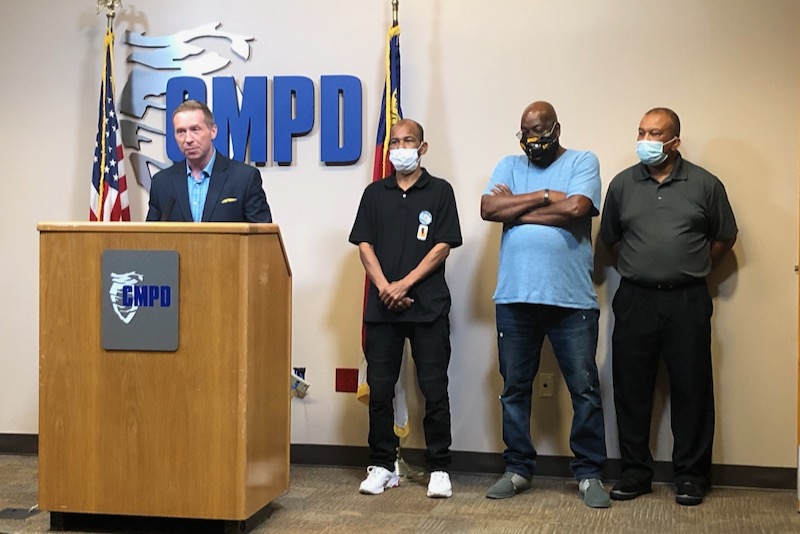 They are angry that, as of yesterday, no witnesses had stepped forward to tell the police what they saw in the early morning hours of June 22, when multiple shooters opened fire at a block party on Beatties Ford Road, killing four people and leaving 10 others wounded.

And they are angry that the Charlotte-Mecklenburg Police Department, which has a substation just down the street from the crime scene, allowed the party to continue for three straight days, even as drivers began racing along Beatties Ford Road and spinning out their vehicles.

“If I go out there and run a red light and there’s a cop there, he’s going to pull me over. He’s going to give me a ticket,” Charles Billings, the father of Jamaa Cassell, said during a press conference at CMPD headquarters on Tuesday. “…Did anyone have a permit out there to have a block party?”

“I can’t feel anything right now,” the father told reporters. “I mean, the grief for my son is what consumes me.”

Like Billings, Kenneth Stevenson wonders why the police didn’t step in to stop the gathering, especially after conditions turned dangerous. And he wonders whether a police presence at the event might have prevented the shootings.

“On a night where street racing, doughnuts in the street…is that not a crime? Reckless driving or something of that nature? So…why are you not up there putting an end to it,” Stevenson said.

A call for answers

Malcolm Graham, who represents northwest Charlotte on city council, also wants answers. At Monday night’s council meeting, he said city leaders have long known about the violence and crime that happens all too frequently along a certain stretch of Beatties Ford Road, near LaSalle Street.

According to the authorities, what started on Friday, June 19, as a sanctioned Juneteenth celebration continued unofficially for two extra days. By late Sunday night, some drivers had begun to race along Beatties Ford Road and spin out their vehicles.

Some residents and community residents have questioned why the police, with a substation nearby, did not intervene before events turned violent, some time around 12:30 a.m. Monday.

“When you see drag racing in the street, when does that get interrupted, the first time it happens, the second time it happens or the third time it happens?” Graham asked CMPD Chief Johnny Jennings at the council meeting? “…I think we have to interrupt the violence when we see it.”

Ed Driggs, one of two Republicans on the 11-member council, said the city is sending mixed messages to CMPD.

“We are simultaneously asking CMPD to be more effective about law enforcement at the same time we are conducting this wide-ranging review of what they do, and we’re responding to calls for defunding them,” he said.” I don’t think that sends a very unified message.”

Driggs further suggested that CMPD officers may have been reluctant to act because of criticism the department received for using chemical agents during demonstrations that erupted in Charlotte following the killing of George Floyd in Minneapolis.

At Tuesday’s press briefing, CMPD Maj. Rob Dance, who heads the department’s criminal investigations unit, said he is “frustrated” that no witnesses have come forward. So far, he said, investigators have gotten only Crime Stoppers tips, which are called in anonymously.

“It’s unacceptable,” he said. “You’re talking about hundreds of people out there, multiple shooters, hundreds of rounds flying around, where kids are on the sidewalks with their parents. And we have not had one witness come forward that saw anyone with a gun or shooting. It’s ridiculous.”

The two fathers who spoke at the press briefing said they were equally frustrated that no witnesses had come forward.

Here are excerpts from their remarks, edited for brevity and clarity.

He was my only son. He’s got seven kids. And the hardest thing that I had to do was come home and tell my grandkids that they lost their father.

My son just finished truck-driving school, and he came home and he told me, he said, ‘Dad, I got my route. I don’t have another driver with me. I got my own truck. I’m leaving from Kentucky to Texas.’ That was going to be [his] route, but it didn’t happen.

And I’m putting it in God’s hand, and I’m praying that he takes the anger out of me. And if anybody know anything, don’t tell me.

Don’t tell me a bunch of bullshit. Come and tell the ones that can help everybody.

My main thing is, Black-on-Black crime. Black lives matter? Show me. When is it going to stop? Until we stop and we start helping each other, it’s not going to ever stop. To me it’s like a new slavery to Black people, killing each other over a bunch of bullshit. Why? I don’t know. The only way it’s gonna stop is we turn around and help each other and get these guys off the street.

Everybody grieve different. But when you lose your only son or child, period, it hurts so bad. Until you lose one…it’s deeper than the bottom of the sea.

He was my one and only child… His greatest accomplishment was being a dad. He put all his time and effort into being the best father he could be. He loved fishing. He was a certified chef, and he was probably everyone’s favorite. He was just such a good guy with an infectious smile.

This is a tragedy where a life was taken way too soon. He had children to raise. He had just got his truck-drivers permit, so he [was] on his way to actually doing some truck driving.

Anyone with information about the shootings is asked to call Crime Stoppers at 704-334-1600 or ​charlottecrimestoppers.com.​

One thought on “A father’s pain: Two men speak out after losing their only sons in Beatties Ford Road shooting”