Johnny Jennings, who takes over leadership from Chief Kerr Putney on Wednesday, said he wants to collaborate with Charlotte communities. 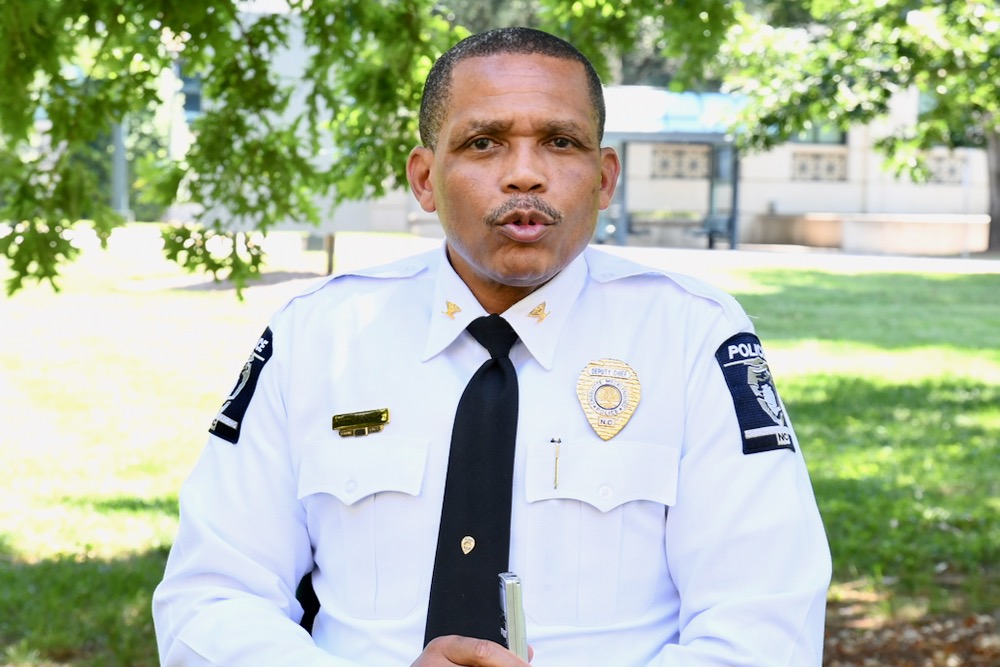 On Wednesday, the Charlotte-Mecklenburg Police Department will get a new leader.

Chief Kerr Putney, who joined the department as a patrol officer in 1992, will retire after five years leading CMPD, giving way to Johnny Jennings, formerly a deputy chief. Jennings also joined CMPD in 1992 and has held a variety of jobs within the department.

On Friday, Jennings sat with QCity Metro for a brief Q&A. His responses below were edited for brevity.

As you prepare to lead this department, what do you want the city in general, and QCity Metro readers in particular, to know?

First and foremost is, we hear you. The world hears you. I think we know that we’re at a point now where change is inevitable. We have to be able to say that we’re in collaboration with the community, because the power to police, the authority to police comes from the people.

With that, the police need to understand, from top to bottom, that they [the people] have a say in how they are policed. We are here to protect and serve, but we’re also here to collaborate with the community, to say, this is the best way to do it; this is how we’re going to police your community.

How will CMPD be different under your leadership?

I think the biggest difference is, I want to [operate] more as a team effort, not just internally, but externally. It’s not us against them. It’s a collaboration to work together to make their communities safer, to make our department better.

And also, there are some things that we do that we could probably improve on as far as diversionary programs for adults. It’s not always the best measure when there’s a crime problem in a neighborhood to arrest your way out of that. So, some of these discretionary arrests that we make could probably be better put forth toward more violent criminal offenses and to make sure that we take the right people off the streets.

There is a growing cry to “defund the police,” which means different things to different people. What do you think of taking away some of the social services type of things that police are now doing?

Initially, when you hear defund the police, it was, oh, my goodness, they’re taking our money. I don’t look at it that way. When you hear the definition and what it truly means, it’s very apparent that the police are asked to do too much. There are things that we do that we probably don’t need to be doing, but we know that it needs to be done.

So when you talk about defunding, if there is a program that we know that someone else could do better and that money goes with that, I’m OK with it. But what I wouldn’t be OK with is if the integrity is not upheld and the success is not upheld of some of these programs that we currently do. I have to make sure that, if they’re taken away from us, they’re still done for the community and done to improve the community.

Does our nation, and by extension Charlotte, have a policing problem?

I think that there are ways that the police can do better across the nation. You know, systemic racism that we’re looking at, police brutality, it seems to me that every time we take a step forward, we take five steps back. When an incident like Minneapolis happens, I think people understand, our officers understand, that this is not good.

Regardless of where it is in the country, we know that it hurts the entire profession when something like that happens. Is there a problem with policing? Certainly, when you pick out certain things like that. However, there also needs to be a focus on some things that we do really well and the things that we are trying to do to improve the community. That needs to be highlighted and celebrated.

Do you have specific goals you want to accomplish?

Absolutely. I want our department to be more focused on customer service. And I say that meaning that our citizens in our community, they’re our customers and we provide a service to them. We’re here to protect and serve. We have to understand, again, that the policing powers are given to us by the people and we serve the people. That’s my goal.

Is that a measurable goal?

I think the way we measure that is through our customer satisfaction. We put out surveys. When we see officers that are getting out with people and talking with them, not when they’re at their worst moment or when they’re victimized or suspects. When you have community members that can name your officers by name and see the same officers out there and they’re walking the streets and talking with you. That, to me, is how you measure success when we start talking about our relationship with the community.

Is there an update on the Beatties Ford Road shooting?

At this time, I don’t have an update to give, and that’s sad. We’re going to continue our investigation as best we can. But I think the community needs to understand that you can’t tolerate activities and actions like this, just as you don’t tolerate police brutality. We need to step up and say, hey, we’re going to come forward and we’re gonna give you some information on this case so that we can get the people that are responsible off the streets.

If you could do just one thing to improve police-community relations, what would it be?

Close the gap on divisiveness, not just within Mecklenburg County or our jurisdiction, but across the entire nation. It hurts me to see that there’s so much division, not just between police and the community or police and public officials. It just hurts to see, though, the nationwide divisiveness that we have. If I could do one thing, it would be to close that gap. Not that we all have to agree and we all have to like each other, but there needs to be a sense of responsibility and love within the communities. If I could change that tomorrow, I would do it.

What can the critics of CMPD do to meet you half way?