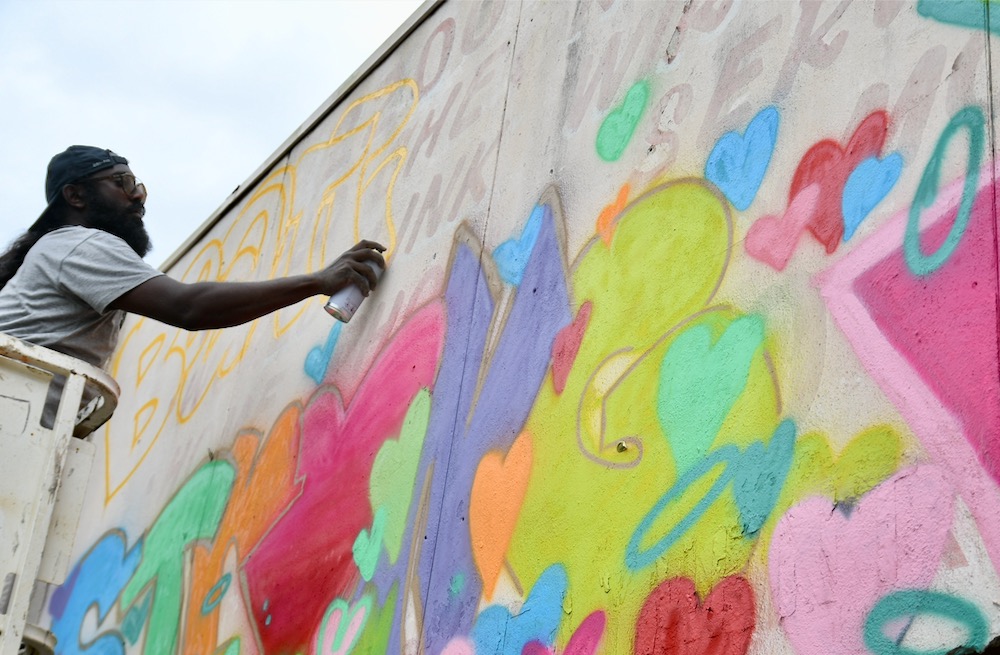 Ricky Singh, a Charlotte artist who lives along the Beatties Ford Road corridor, paints a mural on the side of a restaurant near the scene where shooters opened fire on a street party where residents had gathered to celebrate Juneteenth. (Photo: QCity Metro)

As families began to bury those killed in last week’s shooting on Beatties Ford Road, local artists gathered near the scene on Friday to brainstorm ways to honor those who died.

They spoke of creating artistic projects – planters, mosaics or murals — that would be inspired by the lives of the four young victims:

As of Sunday, the police had announced no suspects or arrests but where asking witnesses to share what they saw.

One mural, painted on the side of a restaurant that sits just across a street from where the shooting happened, went up on Saturday. The artists now are looking to work with other owners of commercial property who might be willing to accommodate public art.

J’Tanya Adams, who heads Historic West End Partners (HWEP), an economic development group and one of the lead organizers of the art projects, called the shooting a “travesty,” an “unnecessary loss of life.” She said she hopes the artwork will speak not only of the lives needlessly destroyed but also of “the strength of our culture and our community.”

Positive change is a theme long advocated for the commercial district that runs along Beatties Ford Road, which is home to a host of Black-owned shops and take-out restaurants. In a city that often seems drunk with growth, it is a corridor that economic investment has largely ignored.

In a report to city council earlier this year, the Charlotte-Mecklenburg Police Department labeled the Beatties Ford Road commercial district, along with three other low-income areas, as violent crime “hot spots.”

Although the four areas make up less than 1% of the city’s landmass, they accounted last year for 8% of violent crimes. Three of those areas, including the commercial district of Beatties Ford Road, saw 14 of the city’s 108 criminal homicides in 2019, according to CMPD.

With funding from the John S. and James L. Knight Foundation, groups including HWEP, UrbanMain and the city of Charlotte have been working to change that reality. They are partnering with neighborhood groups and small business owners along the corridor to bring about economic development and to promote quality-of-life issues.

Charles Thomas, who directs the Knight Foundation’s Charlotte office, said the shooting, while a “sad point,” will not be viewed as a setback to the foundation’s larger goal to promote positive change in Charlotte’s West End.

Standing in a vacant building near the crime scene, where 20 to 30 artists had gathered with a smaller group of residents and community leaders, Thomas said the shooting, in fact, may spark new momentum and serve as a “catalyst for change that residents and resident leaders have been asking for, working for and envisioning.”

He described the proposed art projects as “healing through art.”

Tiffany Fant, a West End resident and community activist, said the public art may serve an additional purpose – providing a thoughtful, organized way to honor the dead that does not involve illegally tagging buildings.

In the hours immediately after the shooting, grieving friends and relatives erected makeshift memorials and spray-painted buildings with the names of their loved ones.

Eventually, she said, the shrines will fade, or be removed by the city, and the graffiti, painted in big, black letters, will become an impediment to business development.

The gunfire that left four dead and several others injured seemed to come from nowhere.

Moments earlier, the block had been the scene of a street party that began two days prior with a well-planned celebration commemorating Juneteenth, the day in 1865 when the enslaved residents of Texas first learned of their freedom – some two years after President Abraham Lincoln signed the Emancipation Proclamation.

As the celebration extended from Friday into Saturday and then into the late hours of Sunday, the gathering seemed to shift. By Sunday night, the police have said, a few people began drag racing and spinning out their cars to perform doughnut maneuvers.

Around 12:30 a.m, paramedics and the police were called after a woman was struck by a car that kept going. According to video footage posted on social media, the shooting began as an ambulance was arriving to assist the woman.

Jahmir Hamilton, an artist and rising senior at West Charlotte High School, said he heard the gunfire from the safety of his bedroom.

In addition to those hit by bullets, at least five people were struck by cars as they scrambled across streets to escape the ensuing confusion.

“I could be in the same situation if the cards were played differently,” said Hamilton, one of the artists now committed to honoring those who died.”

“I don’t like for that to be what our community is known for,” he said. “We all want nice things. We don’t want the negativity that is put on us. “

Thomas, the Knight Foundation executive, said he had taken his family to the official Juneteenth event, where he and his son danced and banged out music on African drums.

“The shooting is a tragedy,” he said, “but it’s not the whole story of the West End.”

Adams, of HWEP, said she hopes the artwork that eventually adorns the corridor will be a “beauty-for-ashes type of situation.”

“We are grieved yet determined,” she said.

This article is part of a Historic West End journalism project funded by the John S. and James L. Knight Foundation. Sign up for our West End Connect newsletter to keep up with our reporting.