Thomas Davis pledges $100,000 so that fathers in Mecklenburg jail can be home for Father’s Day

As Black people, "we've all had our traumatic experiences," the former Carolina Panthers linebacker said during a panel discussion on police violence and social justice. 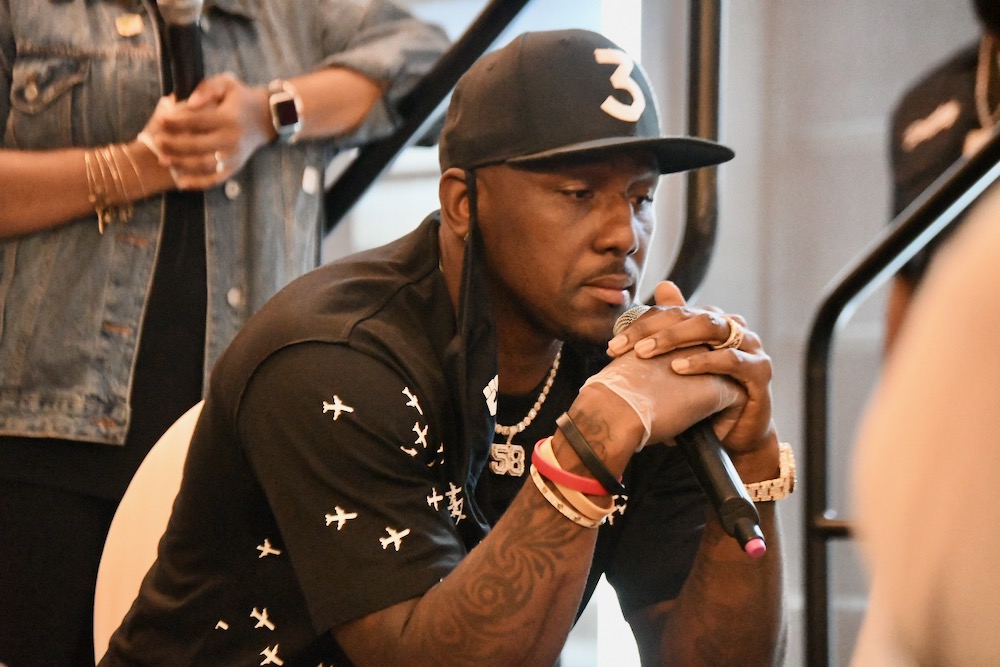 Thomas Davis, who played 14 years for the Carolina Panthers, speaks at the Harvey B. Gantt Center during a forum on police violence, June 19,2020. Photo: QCity Metro

NFL linebacker Thomas Davis fought back tears Friday as he pledged $100,000 so that fathers in the Mecklenburg jail can post bail in time for Father’s Day.

Davis spent 14 years with the Carolina Panthers and now plays for the Washington Redskins. He announced the pledge at the Harvey B. Gantt Center, where DaBaby, the Charlotte-born rapper, was hosting a media event to discuss police violence and social justice.

“It was definitely a spur-of-the moment-decision, but it was something that I felt needed to be done,” Davis later told reporters.

During a panel discussion, Davis joined others in describing questionable encounters with police officers. His encounter happened, he said, shortly after he was drafted as the Panthers’ No.1 pick in 2005.

Davis said he was driving with friends when a Charlotte-Mecklenburg police officer pulled him over, the officer alleging that he had seen someone inside Davis’ car throw a bag of drugs out of a window.

“I’ve never been associated with drugs in my life,” Davis told the audience. “Never smoked, never [drank] to this day.”

He added: “Since that day, going through that experience, I’ve been about action. I’ve been about doing things in this community to help improve the lives of the kids…growing up like I grew up, in a single-parent household, watching my mom struggle.”

He spoke of having to explain to his own children the racial truths behind the nationwide protests they see on television — protests that erupted last month over the killing of George Floyd, an unarmed Black man, by a white police officer in Minneapolis.

“All these things that constantly happen to our people and trying to explain and have these conversations with your kids, man, is hard,” he said. “They don’t understand that, just because you are a professional athlete or just because you have people cheering for you, that you [aren’t] exempt from certain things.”