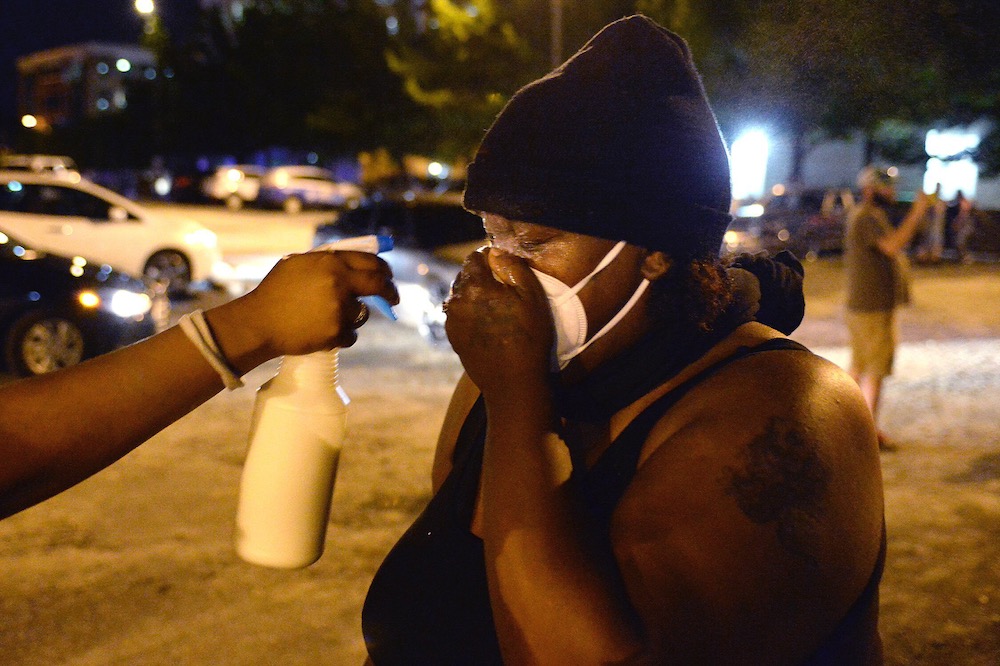 A female protester has her eyes flushed with milk after being hit with tear gas/pepper spray in Charlotte, NC on Saturday, May 30, 2020. The protesters are protesting the death of George Floyd in Minneapolis, MN on Monday, May 25, 2020. Photo: Jeff Siner | The Charlotte Observer via AP

Rarely in our nation’s history have we paused to take such an unflinching look at law enforcement and the role it has played in upholding racial inequality in America.

The graphic killing of George Floyd by a Minneapolis police officer and the growing cries to “defund the police” have forced the hands of elected officials in U.S. cities large and small.

Here in Charlotte, city council last night voted 9-2 to strip money from the fiscal 2020-21 budget that was earmarked for the purchase of tear gas and other chemical agents used by the Charlotte-Mecklenburg Police Department to control unruly crowds.

Although the dollar amount was small – roughly $103,000 – the symbolism was enormous. The vote was triggered, in large part, by the voices of ordinary people — men and women disturbed by images of CMPD officers using chemical agents to control a group of protesters last week in uptown Charlotte.

This conversation about policing is long overdue. Below, you’ll read some quotes from last night’s council vote. We want our readers to hear the voices of those they’ve elected.

The budget amendment was proposed by at-large council member Braxton Winston and was approved on a party-line vote, with the council’s two Republicans – Ed Driggs and Tariq Bokhari – voting no.

Quotes have been edited for brevity.

“People who have been working on police reform and abolition will immediately recognize that tonight’s action does not do enough to end the systemic failures of policing in America and Charlotte. They would be correct to call this out. Those that are veterans to this work will also recognize that policing in America and in Charlotte is a carefully curated system embedded in racism, classism, sexism, homophobia and reduces human nature to a binary – legal versus illegal – when human needs exist on a spectrum…

“This step alone is not good enough. Tomorrow morning starts the real work of reform.”

“I’m not going to support the motion, and I want to explain a couple of reasons why not. For one, I think this is kind of a hasty and rather small measure that has been conceived in the context of the current situation… I believe the changes that are needed are complex and might be large in scale…

“This thing, in my mind, particularly given who the sponsor is and his track record of relations with the police, strikes me as something of a gratuitous dig at the police that doesn’t really change the facts of the situation that much.”

“We all saw the video from last week. What happened on College Street last Tuesday was upsetting and, from my perspective, appalling, and there has to be accountability for the errors that were made…

“Charlotte has a long history of getting things right. There has been significant advances, and there has been some failures. And I believe, from my perspective as one council member, last Tuesday was one of those failures.”

“I think we have to have a real closer look at our CMPD departmental budget, and I think we have to start talking about the potential of an overhaul here, particularly as it pertains to what around the world would be considered military-grade weapons. We’ve allowed, with taxpayer dollars, the purchase of military-grade weapons that are used on residents of our community, and I think that we need to really take a more serious look at that…”

“The reason we’re taking a look at this is not to punish the police. If you look nationwide, they are looking at chemical weapons and the humanity of them. We’ve done our research. There was a young girl in Columbus, Ohio… that died from a respiratory effect after tear gas was dispersed…

“I am deeply for real solutions, deep policy dives, answering questions like, how do we identify a bad cop and remove him from his role?… But how do we not punish all cops for those behaviors? That’s the line we have to divine.

“Officer morale is brutally low… Our officers are seriously having conversations right now about not showing up to work. Our words and actions and their impact on their morale are very important and very real. So, I can’t support this motion.”

“To my colleague, Mr. Bokhari, I will endorse what you said in regards to making sure we’re not punishing and presuming guilt on an entire department or entire profession of people for the bad acts of a few. But I also think that part of the goal here tonight is to ensure that we also give that benefit of the doubt to the people, that we make sure that when there are people who are in the streets or anywhere in our community raising their voices for justice that we don’t punish and presume guilt on that entire crowd based on the actions of a few…”

“We all want the police to show up when our house is being broken into, our car is being stolen, somebody is being assaulted. But the perception of police protection is very different for white and for black and brown people.”

“Our budget reflects our priorities…”

“We know that we cannot operate as business as usual, especially after considering what we have seen in our city on Tuesday night…

“We have to change as a result.”

“We work for the people, and it’s been made very clear…our bosses are telling us that they want to see priorities change.”

Mitchell did not speak on the budget amendment but said he was gratified to see more than 4,000 emails with comments about the budget — a first during his tenure on council, he said.