Neighbors say they weren't informed about the Parade of Counts, which traveled through their neighborhood triggering troubling memories of recent protests. 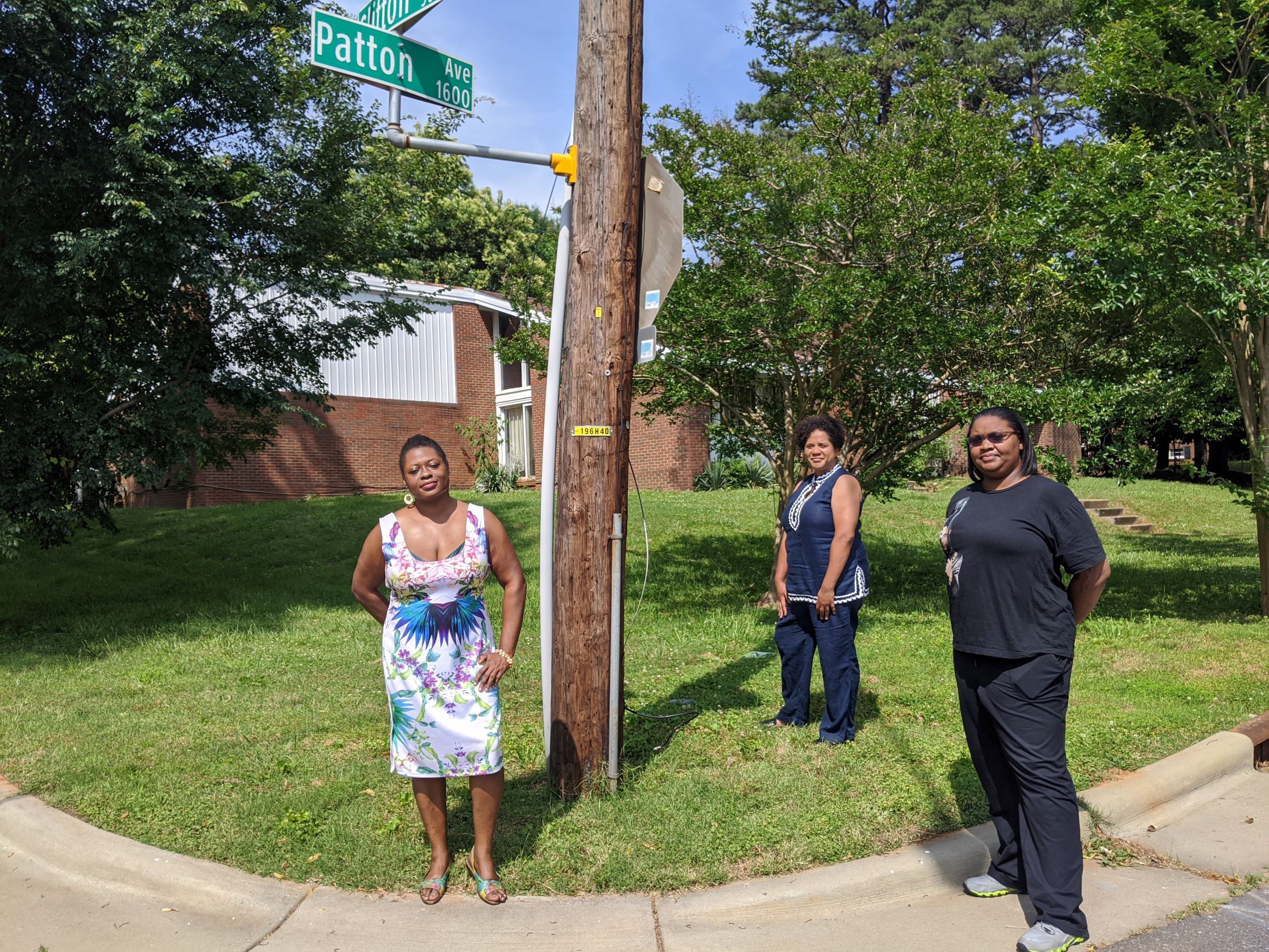 Pictured l to r: McCrorey Heights neighbors Emiene Wright, Colena Corbett and Kamaria Lawrence were some of the neighbors who shared concerns about the June 5 Parade of Counts that traveled through west Charlotte neighborhoods. Photo: QCity Metro

It was Friday morning as journalist Emiene Wright sat at the writing desk in her living room prepared to work. The front door was open to let natural light shine indoors as she kept an eye on the block in her McCrorey Heights neighborhood.

Around 12:45 p.m., she heard police sirens as a Mecklenburg sheriff’s cruiser zoomed down the typically quiet Patton Avenue. She wondered what was going on as another cruiser followed. Protests surrounding the death of George Floyd, an unarmed Black man killed in Minneapolis while in police custody, rocked the west Charlotte community just a week earlier, particularly along Beatties Ford Road. So, the loud sounds and law enforcement presence triggered a physical response from Wright.

“I just grabbed my phone and ran outside,” she said. “I was having a memory of what happened last week. I was nervous.”

During a time when video footage is the basic evidence needed to capture injustice in the Black community, Wright hit the record button on her smartphone camera, not knowing what she’d discover once outside.

It took a few seconds before she realized the cruisers were serving as escorts for a caravan of vehicles riding down her street to promote the census. Riders were hanging out of roughly a dozen cars waving and holding decorated signs while loudspeakers blared music and reminders for residents to complete the 2020 census.

“It took a minute for me to understand that it was the census because they didn’t put any notice out to the community,” said Wright, who’s lived in her home since 2013. “Coupled with the events last week on Beatties Ford, it was really frightening and re-traumatizing for a lot of folks.”

Around the corner on Madison Avenue, Colena Corbett also heard the commotion. Her first instinct was to make sure her children were safe. She instructed her two kids, ages 5 and 11, to go upstairs and stay in their rooms.

The group of neighbors, which also included Kamaria Lawrence, understood the intention to make sure everyone participates in the census but noted that execution of the event could’ve been better.

An attempt to count the undercounted

A group of volunteers began to arrive at the Graham Street Station parking lot across from Camp North End around 10 a.m. on Friday. They were running through final details before the 11 a.m. kickoff for the Parade of Counts, a caravan that would promote awareness about and participation in the 2020 census by traveling through historically undercounted census tracts. It was a partnership between NC Counts Coalition, Project 70Forward and Meck Counts 2020.

The parade was Plan B after the original plan, a series of four community block parties, were canceled due to Covid-related restrictions. Organizers still wanted to find a way to bring awareness to some of the neighborhoods traditionally undercounted. The planning team saw a similar census parade held in Raleigh and thought it would be a good idea.

“We had less than 20 days to organize the event,” said Judith Elise Brown, executive director of Project 70Forward, an organization that provides services and resources for residents living with disabilities.

Tya Bolton, a planning team member, livestreamed the event to Facebook. They waved to people along the route and people waved back. People were dancing on the sidewalks as music played from the speakers. Members helped a few passersby complete the census on the spot. Bolton was surprised to learn about the reaction from the McCrorey Heights residents.

“We wanted to do something that was timely. We were not aiming to create any triggers; we were aiming to give people something to celebrate,” she said.

Three more census parades are happening in the coming weeks. The next one will take place in Brown’s Grier Heights neighborhood tentatively scheduled later this month. Listening to feedback and concerns, Brown says there won’t be any police presence in future caravans. Instead, they will connect with peacekeepers in the community.

“As a person with a disability, a lot of things in our current system trigger me, so I’m very cognizant and sensitive to understanding the triggers of somebody else,” she said.

For the first event, marketing tactics included radio spots, social media and connecting with community organizations. The McCrorey Heights neighbors added that tapping into neighborhood associations could’ve been another tool in the toolbox. Wright said they have an active association that’s good about getting information to residents.

“All of the neighborhood associations have a coalition, so it’s not like you have to email every community. You could’ve sent one email to the presidents’ coalition,” Wright said.

It’s a reminder for event organizers about the importance of community relationships. Brown offered her apologies to neighbors who were negatively impacted but noted how apologies ring hollow right now.

“The biggest thing is that actions speak louder,” she said.