Ardrey Kell High School is once again the subject of racism on campus. 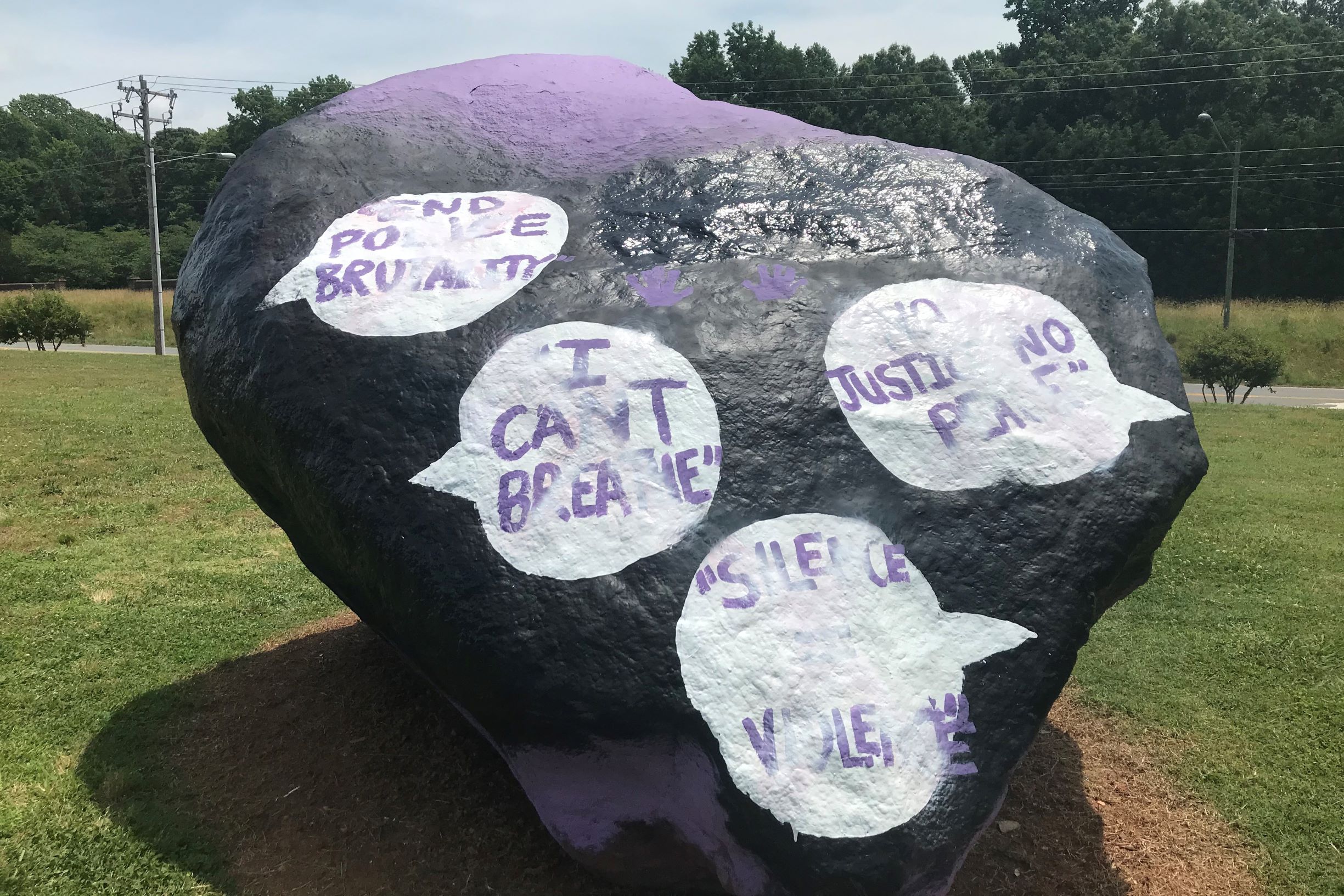 Students, parents and members of the community are upset after a video clip of Ardrey Kell High School’s defaced spirit rock circulated across social media Sunday afternoon. Graffiti covered recent artwork that displayed phrases like “Black Lives Matter” and other messages in support of racial equality and justice.

Kayden Hunt, Ardrey Kell’s student body president and a graduating senior who is Black, created the idea to paint the rock with Black Lives Matter messages. With the school’s approval, she and five of her friends spent eight hours painting the spirit rock last Thursday.

“Painting the rock was a simple way to get the message out because Ardrey Kell Road is a busy road,” she explained. “It will get a lot of traction and can be appreciated in that area.”

This type of activism and leadership isn’t unusual for Hunt. She’s been heavily involved in student activities throughout high school. Besides student council, she created a “social injustice” evening class to give students a place to discuss issues and viable actions to solve them.

Hunt recalled the pride she felt and expressed tears of joy as the group finished painting the rock.

“Then I woke up this morning and yeah…I just started crying,” she said.

She woke up on June 7 to texts and Snapchat messages saying the rock had been spray-painted with anti-Black Lives Matter messages and propaganda. Hunt and her parents traveled to campus to see for themselves.

“It really sucked to see that in person. Something that brought me to tears two days ago, now had me sobbing for a totally different reason,” the senior said.

On one side, the rock listed names of unarmed Black people who died as a result of interactions with law enforcement, including George Floyd, Breonna Taylor, Keith Lamont Scott and Tamir Rice. When she arrived on campus Sunday morning, the names had been crossed out with spray paint.

On another side, red “X” marks defaced messages with the phrases “I Can’t Breathe,” “No Police Brutality,” “No Justice No Peace” and “Silence = Violence.” The word “lies” was painted multiple times. “Blue Lives Matter” was written over the phrase “Say Their Names.”

The graffiti was quickly covered with black and white paints. But as a result, the names of the victims are now removed, and the messages are unclear.

Stacey Rose, whose daughter is also a graduating senior at Ardrey Kell, says she wasn’t shocked at all. The video clip shared to her Facebook page had been viewed more than 23,000 times by late Sunday afternoon.

“This is not the first time, second time or third time. It’s disappointing,” she told QCity Metro. “How can you be so bold right now with everything going on and how high tensions are right now. As a parent, it makes me wonder what my kids dealt with in the hallways and in classes.”

Ardrey Kell’s principal David Switzer said the graffiti did not represent the school, the community or Charlotte-Mecklenburg Schools.

“I found out about it this morning & immediately removed the hateful images & restored some of the original message. We stand for & support the movement towards social justice for all,” he explained in a tweet.

A history of controversy

Located in south Charlotte, Ardrey Kell is a high-performing school that ranks among the top in the Charlotte metro area and North Carolina, ranking 4th and 14th respectively, according to U.S. News and World Report. Nearly 80% of students take at least one AP class and the school boasts a 95% graduation rate.

Last month, Switzer apologized after using the term “colored folks” during a staff meeting. In January, a white student-athlete sent a Snapchat message to a teammate comparing her to a monkey. In March of 2019, a white player on Ardrey Kell’s boys’ basketball team was suspended for racist remarks he made about West Charlotte High School’s basketball team ahead of the state semifinal game. And during a football game in 2017, the entire student section was forced to leave a home game after yelling racial slurs at Black children.

Hunt was hurt by the incident, but she isn’t giving up on speaking out about social justice. She’s organizing an event to repaint the rock on Monday. She’s grateful for the support, encouraging words and donations that she’s received.

Hunt plans to use the event as an opportunity for the community to come together to discuss and express how they feel.

“We’re so much stronger than that. I think that is the real message when we’re repainting it. Hate will never win. Never,” she said.

She also mentions a need for everyone to use their voices. When dealing with issues regarding recent racial controversies at Ardrey Kell, she doesn’t feel like students, particularly Black ones, have a space to express themselves.

“I would like to talk to CMS about making better spaces for Black students – maybe make the evening class, like the one I created, universal throughout CMS, so people have a space to talk about these things.”