A protest organized by the Charlotte-Mecklenburg chapter of NAACP and Kidz Fed Up led demonstrators through Uptown Charlotte with demands for justice. 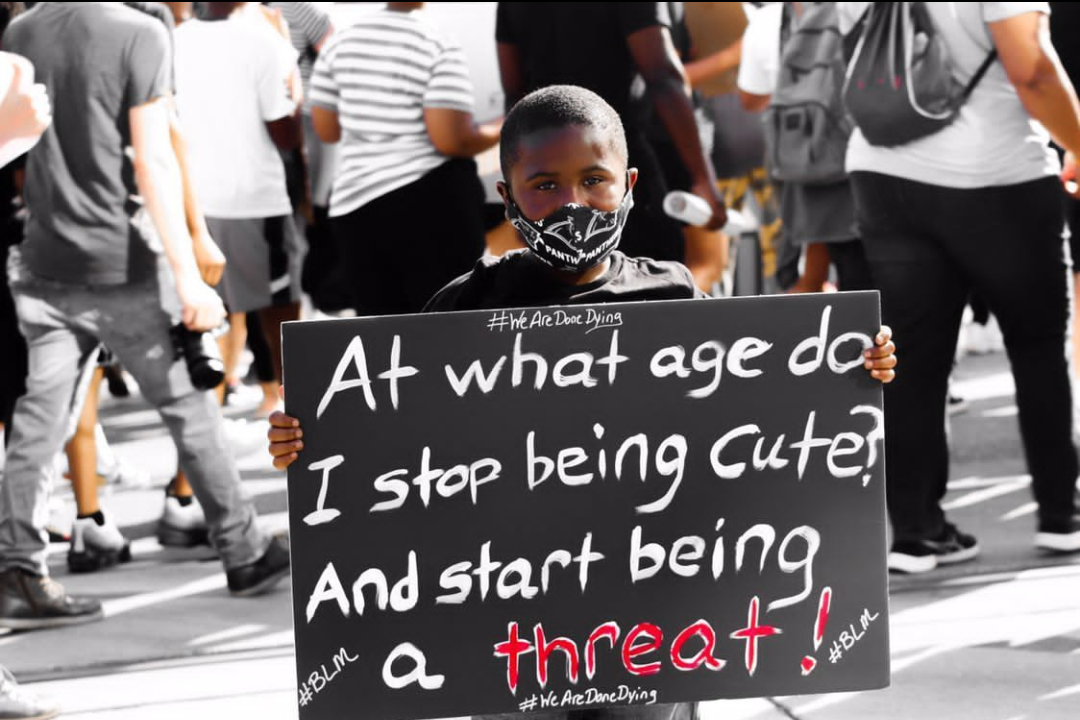 “This is not a sprint, it’s a marathon.”

That was the message from organizers of a protest that drew thousands of demonstrators into uptown Charlotte Tuesday afternoon.

The demonstration was organized by Charlotte-Mecklenburg’s branch of the NAACP and youth organization Kidz Fed Up. It was the fifth consecutive day that protesters took to the streets demanding change following the high-profile deaths of George Floyd and Breonna Taylor at the hands (and knee) of police officers.

Protesters held homemade signs and shouted “No Justice, No Peace” as several thousand marched from the Charlotte-Mecklenburg Government Center, snaking through Uptown before ending at Charlotte Mecklenburg police headquarters. There, organizers led a rally relaying demands for justice and accountability but also messages of perseverance and hope.

“Black people, I got you. White people, you better have us,” proclaimed Corine Mack, president of the local NAACP chapter, as she spoke to the sea of diverse faces.

Activist Kass Otley, who led Monday’s protest through Charlotte’s affluent Myers Park neighborhood, says Black communities have been in a state of emergency since we were brought to America.

“We’re still in a state of emergency, but the difference is that we’re galvanizing our power,” she explained.

Ray McKinnon, community activist and pastor of South Tryon Community United Methodist Church, tweeted that protesting this week with his 19-year-old son has been both incredible and heartrending.

“I love seeing the world through his eyes but it’s also incredibly scary,” he said.

That “scary” part is what had social media buzzing into the night.

Around 10 p.m., Charlotte-Mecklenburg Police Department tweeted that “chemical agents were deployed” after officers were hit with bottles, rocks and chemical agents by protesters. However, Queen City Nerve, who has been livestreaming the protests, tweeted that police were firing flashbangs and pepper balls toward protesters trapped in a parking garage.

The video footage grabbed McKinnon’s attention, along with mayor pro tem Julie Eiselt and others who called foul on CMPD.

City Council member Dimple Ajmera said she contacted City Manager Marcus Jones, who oversees the police department. CMPD also stated that it is “internally reviewing the circumstances that developed this evening on 4th Street to ensure policy and protocol were followed.”

Calls for fair investigations into the de-escalation tactics of police departments across the country, and actions that eliminate police brutality overall, have been issues at the heart of the protests.

Joshua Proby, criminal justice chair for the Charlotte-Mecklenburg branch of the NAACP, said the community wants to see policies change. While protesters are marching, he says the group is also behind the scenes writing policy to lobby legislators at the state and federals levels.

“We also want to see the people who aren’t willing to fight for us voted out of office as well as getting the people in there who need to be so that we can make the change. That’s our ultimate goal.”

The NAACP chapter is encouraging residents to sign up to speak at the June 8 Charlotte City Council meeting.