As Charlotte saw its fourth day of demonstrations, marchers took their cause to some of the city's most affluent neighborhoods. 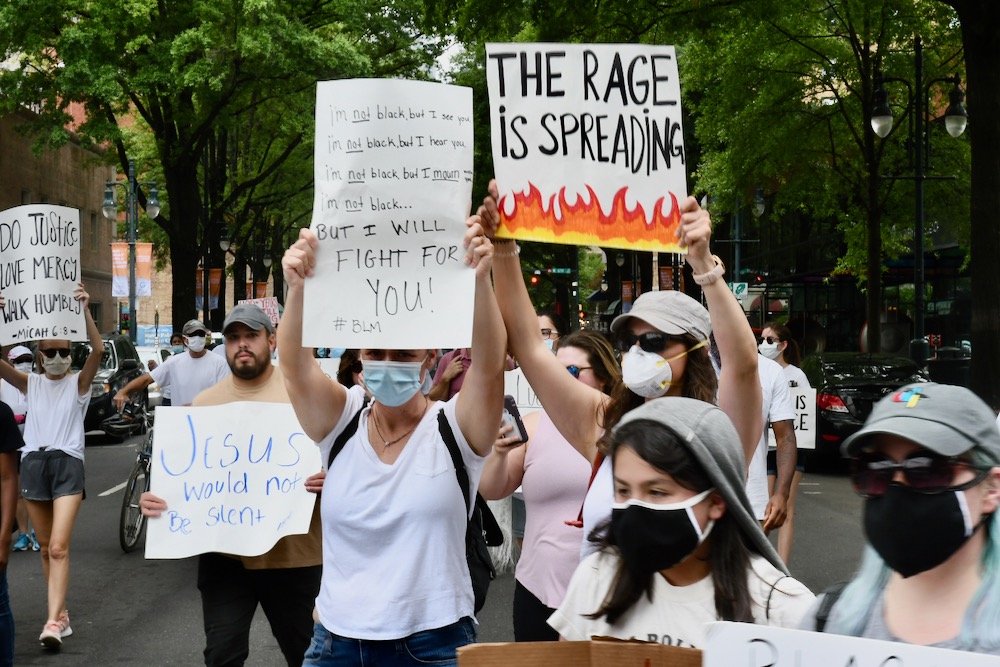 “Disturbing” and “heartbreaking.” Those are the words used by Charlotte’s incoming police chief to describe the death of George Floyd at the hands of a Minneapolis police officer.

Speaking before city council for the first time since he was named to replace Chief Kerr Putney later this year, Deputy Chief Johnny Jennings said he normally avoids talking about policing situations that unfold in other cities, but this time, he said, was different.

“I think the full story is there. There is nothing else that you can tell me or convince me from what I saw on the video,” Jennings said via teleconference as city leaders continue to practice social distancing because of the coronavirus.

“It’s disturbing. It’s heartbreaking. It’s something that really triggered me. In no way shape or form does that reflect what our expectations are of our department, of our officers.”

Jennings said he had spoken with officers both active and retired and at all levels within the organization.

“I haven’t met a single person who has any type of justification for what we saw in Minneapolis,” he said.

As Charlotte entered it’s fourth night of demonstrations, Jennings said CMPD had made 70 total arrests and recovered 10 guns. At least three of the people arrested were in their teens — a 15-year-old was charged with assaulting a government officer and a 16-year-old was arrested on charges of carrying a concealed gun.

“There’s no telling what we have not been able to recover,” Jennings told council members.

CMPD reported that eight police officers had been injured during the demonstrations and that dozens of businesses had been vandalized.

“Rioters have thrown rocks, bricks, bottles of water, molotov cocktails. Officers have been assaulted by all of those items by people who have participated in the rioting,” Jennings said.

As the protests continued, the demonstrations on Monday moved away from uptown Charlotte and into some of the city’s most affluent neighborhoods.

Hundreds of people gathered in Freedom Park in Charlotte’s Myers Park community to express their anger and frustration over the death of Floyd, who died after a Minneapolis police officer knelt on his neck for nearly nine minutes, even as Floyd pleaded that he could not breath. That officer, Derek Chauvin, was quickly fired and charged with third-degree murder and second-degree manslaughter. Three other officers at the scene also lost their jobs.

The police actions that led to Floyd’s death were captured on video, sparking demonstrations nationwide, some of them violent and destructive. In Charlotte, firefighters and paramedics who were assisting an injured demonstrator were hit with rocks and debris, Jennings said.

The incoming chief also spoke of demonstrators who had sought to protect officers and discourage violence. He said the department had deployed a “conversation team” that seeks to engage with demonstrators to de-escalate tense situations.

“We always welcome and we’re perfectly capable of dealing with peaceful protests,” he said. “When it’s a crowd-management issue, that’s fine. When that protesting turns into rioting and assaults and property damage, then we have to take action on the law enforcement side.”

The march that entered Freedom Park was dubbed the “justice walk.”

Kass Ottley, one of the event’s organizers, told The Charlotte Observer that protesters went into the Dilworth/Myers Park neighborhood to wake up people with privilege.

“It’s one thing to see a demonstration on television, it’s another to see it in your backyard,” Ottley was quoted as saying on the newspaper’s website.

Ottley, who is Black, said that white people in the crowd must have hard conversations with family and people in their lives.

“It’s not enough to be here with us, you need to carry this spirit everywhere you go,” she told the Observer.

The marchers were joined in Freedom Park by several members of the Carolina Panthers, including Shaq Thompson and Tre Boston.

At some homes, residents came outside to watch as the demonstrators marched past. Others handed out bottles of water.