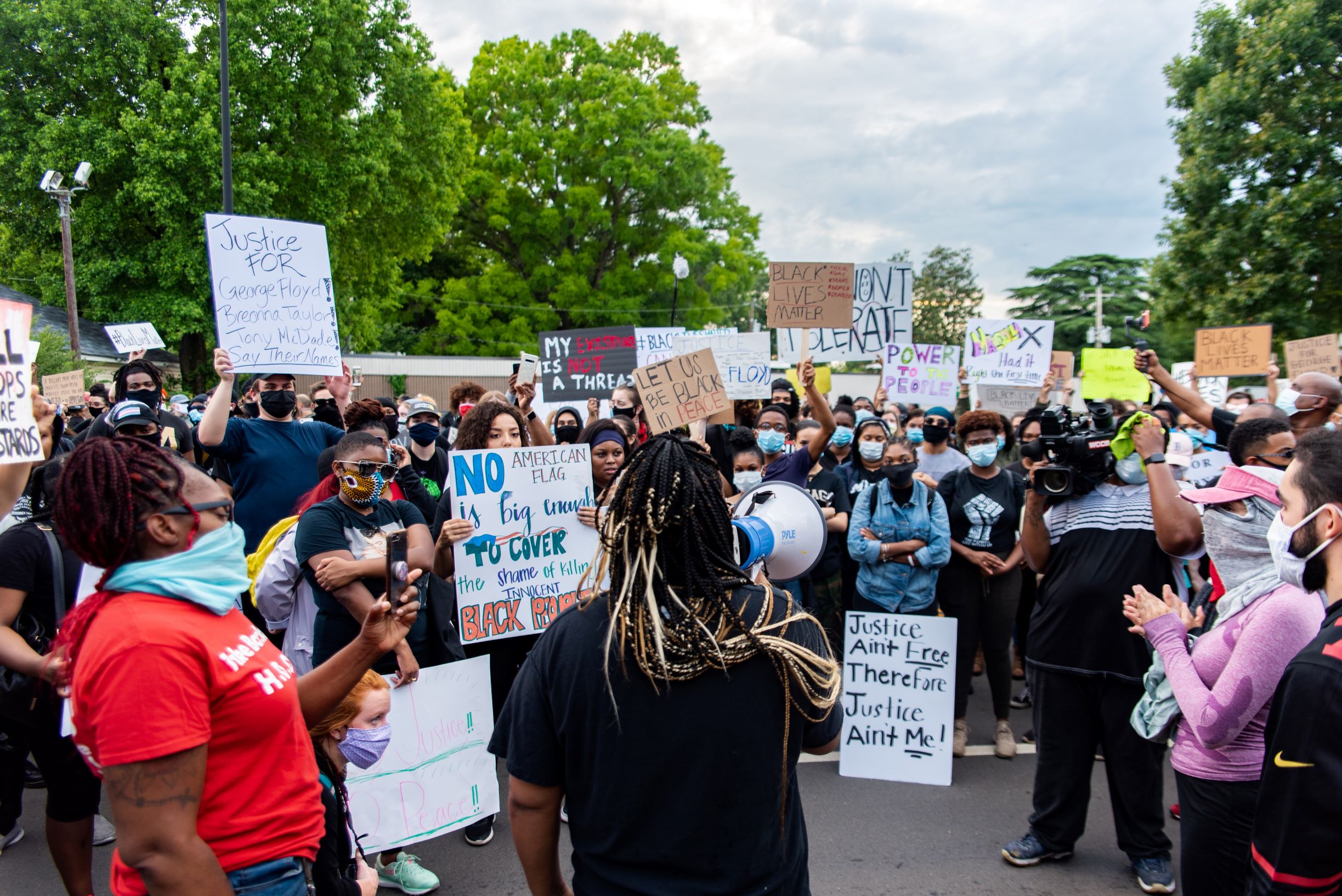 Hundreds of people showed up for a protest on May 29, 2020, seeking justice for George Floyd, an unarmed Black man recently killed in Minneapolis. Photo: Joshua Galloway

Protests and rallies have organized across the country in response to the death of George Floyd, an unarmed Black man killed in Minneapolis. Four police officers were fired in connection to his death. One of the former officers, Derek Chauvin, was arrested and charged with third-degree murder and second-degree manslaughter as video showed him kneeling on Floyd’s neck for several minutes as he lay handcuffed on the ground insisting that he couldn’t breathe.

In Charlotte, word spread on Friday that a group called “Justice for Police Brutality – Charlotte” was leading a protest on the city’s west side, specifically along Beatties Ford Road. A mixed crowd of about 300 people gathered outside the Charlotte-Mecklenburg Police Department’s Metro Division with signs reading themes like “Black Lives Matter,” “No Justice, No Peace” and “Stop Police Brutality” while protesters shouted chants like “F–k the police.”

But as night started to fall, tensions began to rise. CMPD tweeted that protesters continued to throw rocks at the police station, breaking several windows. We saw CMPD fire tear gas and protesters throw bottles. Dozens of police officers in protective gear ordered the crowd to disperse after the protest was declared an “unlawful assembly.”

By the end of the night, there were several arrests, including Charlotte City Council member-at-large Braxton Winston. According to the arrest report, he was charged with failure to disperse on command. Winston, who was seen interacting with protesters and police officers, tweeted Saturday at 1:40 a.m. that he was home safe.

See more photos from the protest.

A mix of voices

Local activist Kristie Puckett Williams took to Facebook Live to let viewers know that the network of Charlotte’s known social-justice advocates didn’t play a role in Friday’s protest. Williams said she was unaware of the gathering but headed there once she heard that protesters were gathering on Beatties Ford Road.

“My main concern going out here is about my Black and Brown brothers and sisters not getting their a– arrested tonight,” she said with a caveat that if they were arrested that the network was ready to bail them out.

District 2 City Council member Malcolm Graham told WCNC that many of the individuals were out-of-towners who were instigating public violence.

“I’m here to make sure that my neighbors and friends along the corridor are OK and that we provide the type of support that both our community needs right now, but also our police officers,” he said. “We have to address America’s Achilles’ heel, which is racism, and that certainly doesn’t escape Charlotte.”

With riots occurring in major cities across the country, people are going to want to know who is responsible for each incident. For the general public, it will be easy to point the blame toward the usual suspects, angry mobs of Black people. The Beatties Ford Road protest has QCity Metro and others wondering who exactly is the leader(s) of “Justice for Police Brutality – Charlotte?” Was it necessary to organize the demonstration in the Historic West End — a predominantly residential Black neighborhood?

People have the right to protest peacefully, but it is important to understand the contentious and delicate nature of CMPD’s relationship with the Black community.

Charlotte’s leading Black activists, who are engaged with those most impacted by police violence, did not organize this protest. It’s unclear why organizers did not reach out to them for assistance. This form of protester privilege may do more harm than good toward protesters and residents if they are unaware of how the established groups operate and deal with local law enforcement.

The most notable CMPD-involved shooting in recent memory was Keith Lamont Scott in 2016. It led to three nights of protest, millions of dollars in damage to the city, and the fatal shooting of Justin Carr during the second night of unrest.

Westside residents have been vocal for years about police brutality. They don’t need an impromptu protest on Beatties Ford Road as a reminder, but there are plenty of areas of the city not impacted by these injustices that could benefit from a peaceful protest. These same areas have benefited from Charlotte’s economic growth for decades, as the Beatties Ford Road corridor remained ignored.

The consensus among several Black people following the death of George Floyd is a need for allies to speak up against the mistreatment of Black people in America. However, actions that will affect the Black community should include those who are actually in the struggle. Based on the reactions of Charlotte grassroots leaders, they were not consulted or included. If these were indeed out-of-towners, with no regard, will these alleged instigators be involved in any other upcoming local protests, and how will actions impact the work of Black community organizers?