A child of the Great Depression, Grier recently celebrated her 97th birthday. She and her late husband, Joe, were among the first residents of McCrorey Heights. 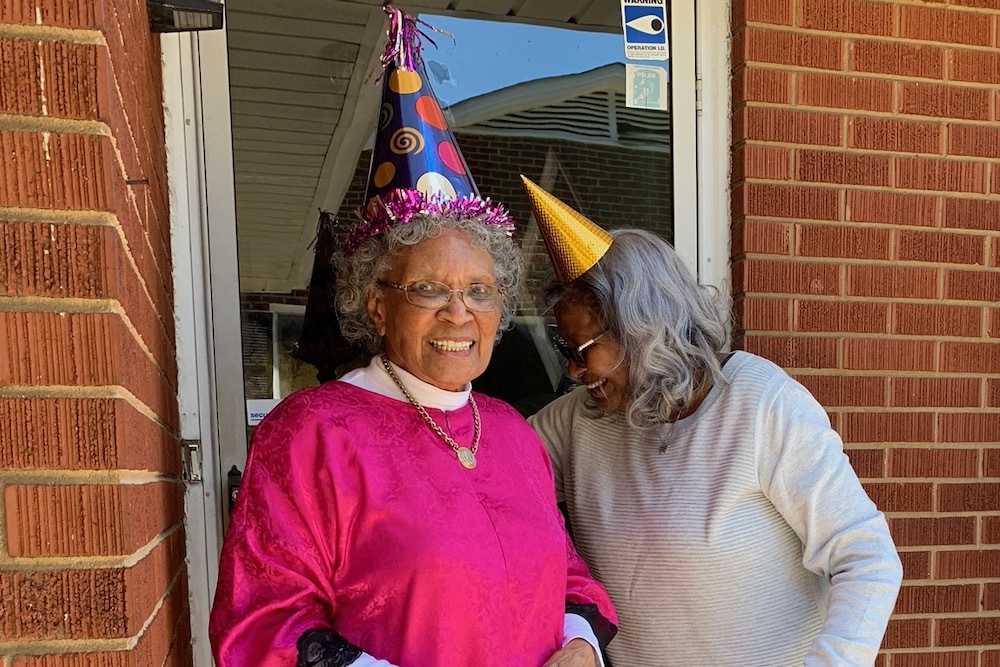 Mildred Grier celebrated her 97th birthday this month. The Charlotte native grew up with six brothers in the city’s Third Ward neighborhood, near what is now Panthers Stadium.

The retired educator and her late husband, Joe, were among the original residents of McCrorey Heights, where she has lived ever since.

Grier’s was the first high school graduating class in Charlotte required to complete the 12th grade. She also was among the first women admitted as freshmen to Johnson C. Smith University, in 1941. She later received a master’s degree from Columbia University’s Teachers College in New York City, where she studied during the summers.

Grier is a lifelong member of First Baptist Church-West and remains active in the McCrorey Heights Neighborhood Association, Alpha Kappa Alpha Sorority and her bridge club.

Our Q&A with Grier was edited for brevity and clarity.

How has West Charlotte changed?

Back then they just called it Biddleville and Wesley Heights. They weren’t saying West Charlotte. Back in the day, Charlotte was divided into wards. It was just the Wards, Cherry, Grier Town and Biddleville for Blacks. From what I remember, Third Ward was the poorest part of Charlotte. We didn’t have all those condominiums and apartments.

Growing up, I was living during the depression, but I didn’t know there was a depression because we had food. I knew Mama would make our clothes. When our shoes would wear out, if Papa had the money, he would buy leather and put that on the bottom of our shoes.

Papa, he worked at the lumber yard, Warren Lumber Company. Papa was making $8 a week. On Saturdays, he worked at the A&P grocery store right around Wilmore Drive and Mint Street at night and cleaned up, and they would give him the leftovers. On Sunday morning, before we’d go to church, we’d take a brown paper bag and fill it with the leftover groceries, and me and my brothers would each take a bag to somebody.

How did you choose Johnson C. Smith University?

The only reason I went to college was my biology teacher was the head of the JCSU Alumni Association. It was 1941, and that was when Smith admitted ladies for the first time. He said, “You po’ chaps, you going to college.” He came around to (me and my friends’ houses) and let our parents know that he was going to get us scholarships. A scholarship was $8 a month… My second-oldest brother had a good job at the pharmacy and he bought all my clothes. Dresses with crinoline lace.

When I was a student, that was during World War II.  One of my brothers left on December 5, 1941, and then that Sunday morning (on December 7) we found out about the Pearl Harbor attack (in Hawaii).

How has JCSU changed over the years?

We didn’t have all those buildings. The campus in general is just beautiful now. When I was a student, I didn’t have any money, so I couldn’t give any money to help. Now I can give. This year I’m celebrating the 75th anniversary of my graduation from Smith. I still go to homecoming. I’ve been going just about every year. I’ll be down there under the (VIP) tent eating and talking.

What about McCrorey Heights? How has it changed?

This was the first community of this kind (a suburb for Black people). It had teachers and preachers and lawyers and doctors. Everybody was a professional. Dr. H.L. McCrorey (first Black president of JCSU) owned all of this property. There was nothing over here but woods. I told (my husband) Joe I wasn’t coming over here in those woods. We bought our lot (in 1953) and it was five years before we built anything.

When we moved here, everybody who came here, they were young. Most of them had children. But most of the kids wouldn’t come back after they went to college. The people just started dying out. That’s when the people started selling.

Most of them (original homeowners) bought on V.A. loans. When they added on, that’s what got a lot of them in trouble (adding debt and second mortgages). Prominent people had houses that were foreclosed. The children couldn’t keep it up. Now there’s just a very few people who have been here when we moved into this community. Today, you just have one or two of the kids who have moved back in. Now these houses are too expensive (selling for over $400,000).

What advice would you give younger people today?

There are things you have no control over. You don’t worry about it. Be the best you can be. That’s all that God requires. If you talk to the Lord about things, just leave it there. But He is kind of slow sometimes (Grier said with a laugh).

This article is part of a Historic West End journalism project funded by the John S. and James L. Knight Foundation. Do you know a West End resident who deserves recognition. Use app below to make nominations.