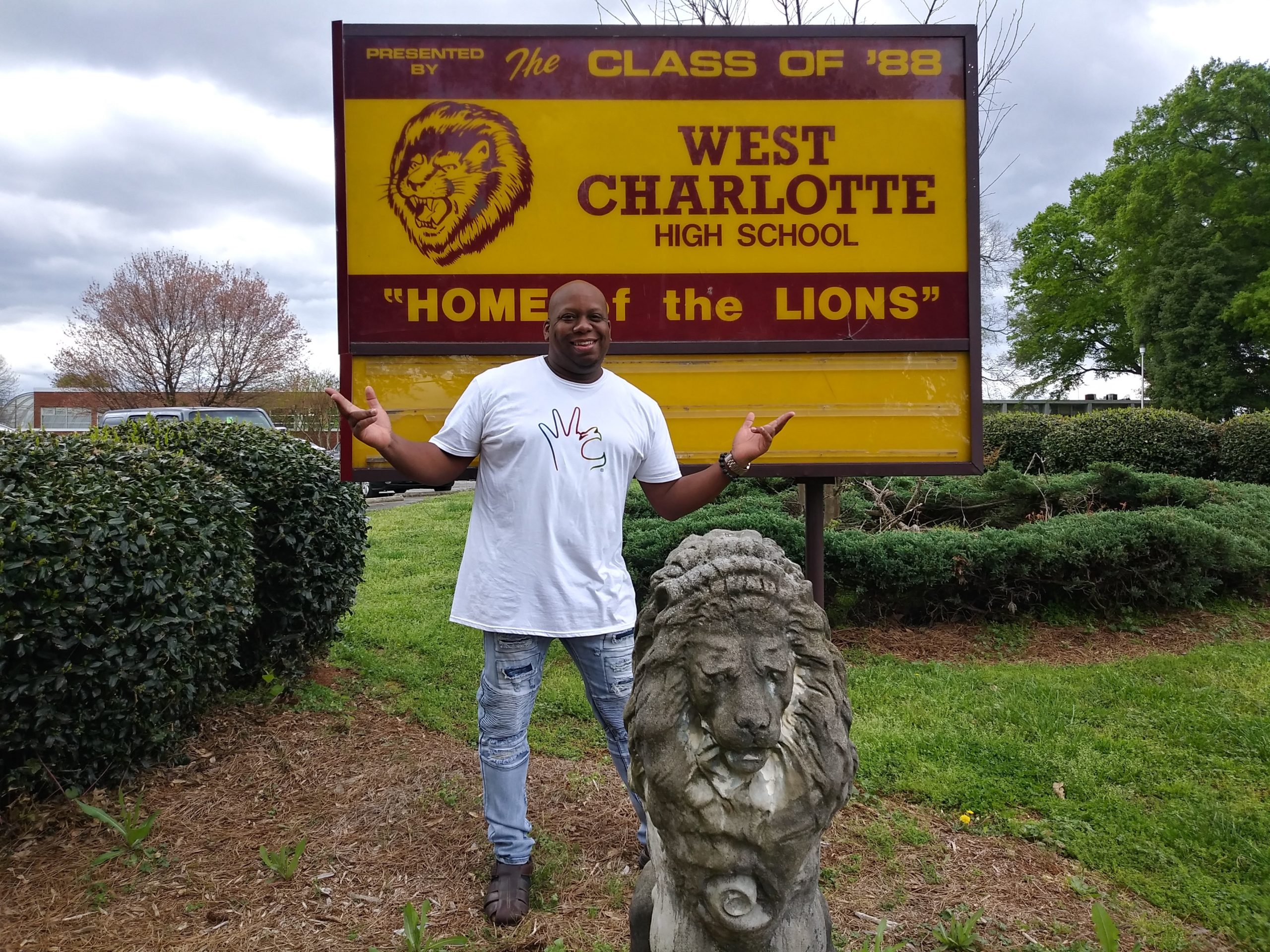 Kenny Quiller has had many entertainment-industry greats in his barber chair. He’s shaped up New Edition, Kevin Hart, and traveled with more than a dozen celebrity tours to keep performers paparazi-ready. Now, he’s giving back to West Charlotte High School’s cosmetology department, where he first learned his trade, by organizing a fall cruise for alumni.

Quiller grew up in Hidden Valley but graduated in 1990 from West Charlotte. He had a reputation for being entrepreneurial, cutting hair for the football and basketball teams and even some teachers. The vocational program was a lifeline for the young man who could have ended up in the streets.

“I taught thousands, but I’ll never forget Quiller. He was a personality,” said Gary Weart, former social studies teacher and football, baseball and softball coach. Weart recalled Quiller as an almost hyperactive teen with big ideas –so many, at times, that he had trouble articulating them.

“He had tremendous school spirit, and always wanted to make things happen,” Weart said. “And he stuttered. A lot of it was due to his excitement. He wanted to tell you what he wanted to do so fast that his tongue got ahead of his brain. But cosmetology was his life preserver.”

Quiller agrees: “I made Ds and Fs in my academic classes, but As in cosmetology, because I wasn’t bored. I was motivated,” he said. “If not for the program at West Charlotte, I would have dropped out of high school.”

While he perfected his skills at school, Quiller nursed a secret dream: to use barbering to break into the music business. He bought lots of albums, studying the music intensely and poring over the liner notes to learn the names of producers, managers, agents, studios and songwriters.

“I didn’t give a damn about the celebrities. I wanted to know who was who behind the scenes,” he said.

He got his first shot in 1988, when New Edition came to Charlotte for a concert. Quiller began calling hotels, asking to be put through to the room of lead singer Ralph Tresvant. He hit the jackpot when a lax receptionist at an Embassy Suites complied.

“I left a message and said, ‘I cut hair. If you need anything, call me,'” Quiller recalled.

Brooke Payne, the group’s choreographer and manager, returned the call, and although Quiller was “sweating bullets,” he landed his first celebrity clients — a huge milestone for the teen who was not yet a senior in high school.

From then on, Quiller was persistent. When Hi-Five announced a show at the Grady Cole Center, he snuck backstage before the concert and said he’d been hired to cut their hair. He connected with Russell Neal, not the lead singer but the more business-minded member of the group, who asked if he’d ever considered going on tour with a band. Quiller quit his post office job and rode a Greyhound bus 22 hours to their next tour stop, in St. Louis.

“It was like being Clark Kent,” he said. “I didn’t want to be a threat to any producers or songwriters, so I had to dumb myself down. I kept my mouth closed until I saw my chance.”

Quiller worked with Guy, Boyz II Men, YoYo, Tony Toni Tone, Keith Sweat, and many other top ’90s groups, spending his time not only networking but also absorbing as much information about the industry as possible.

Eventually Teddy Riley took him on as a personal assistant, and Quiller began discovering new talent. He worked as an agent for some acts and got a songwriting credit on a Michael Jackson album. All the time, he remained based in Charlotte, flying out to conduct business, most recently as part of Kevin Hart’s 2019 Irresponsible Tour.

These days, Quiller has eased off his youthful obsession. He still promotes shows, such as Raphael Saadiq’s Jimmy Lee concert at the Fillmore on Feb. 5. But he mostly manages The Grand at 333 Beatties Ford Road, an appointment-only barbershop where he’s cut since 2014.

As business trickled to a stop in the days leading up to North Carolina’s Covid-19 stay-at-home order, Quiller’s thoughts turned to the place that set him on the path to success.

He was ecstatic to learn of the school district’s plans to build a new, state-of-the-art West Charlotte High School, and he contacted the school’s alumni association with an idea for a fundraiser: a cruise on Lake Norman to coincide with his 30th class reunion approaching in September.

Called 100 Dub C’s on the Lake, proceeds will benefit the West Charlotte cosmetology program and the Clinton L. Blake Endowment scholarship. Tickets are on sale at the West Charlotte Alumni Association’s Eventbrite page, where anyone can make a donation.

“West Charlotte has a very rich history, and the alumni association does a lot for the school,” said Robin Lewis Hudson, the association’s national president. “We want to give back and provide support for the excellence in education we received there. This fundraiser is one of the ways we’ll do that this year.”

In 2018, at an 80th anniversary breakfast, alumni raised $15,000 for West Charlotte High, Lewis Hudson said. And this year, alumni raise money to buy passports for students in the school’s International Baccalaureate program, who were planning a trip to Europe.

“For obvious reasons, the trip was canceled,” Lewis Hudson said, “but the students still have an important document that can broaden their horizons.”

Quiller hopes to continue that spirit of opening doors for this generation of West Charlotte students.

“Being in the program taught me to build connections with students, teachers and clients,” he said. “Cosmetology did me wonders.”