For Tino McFarland, entrepreneurship was always the path; construction was the gateway 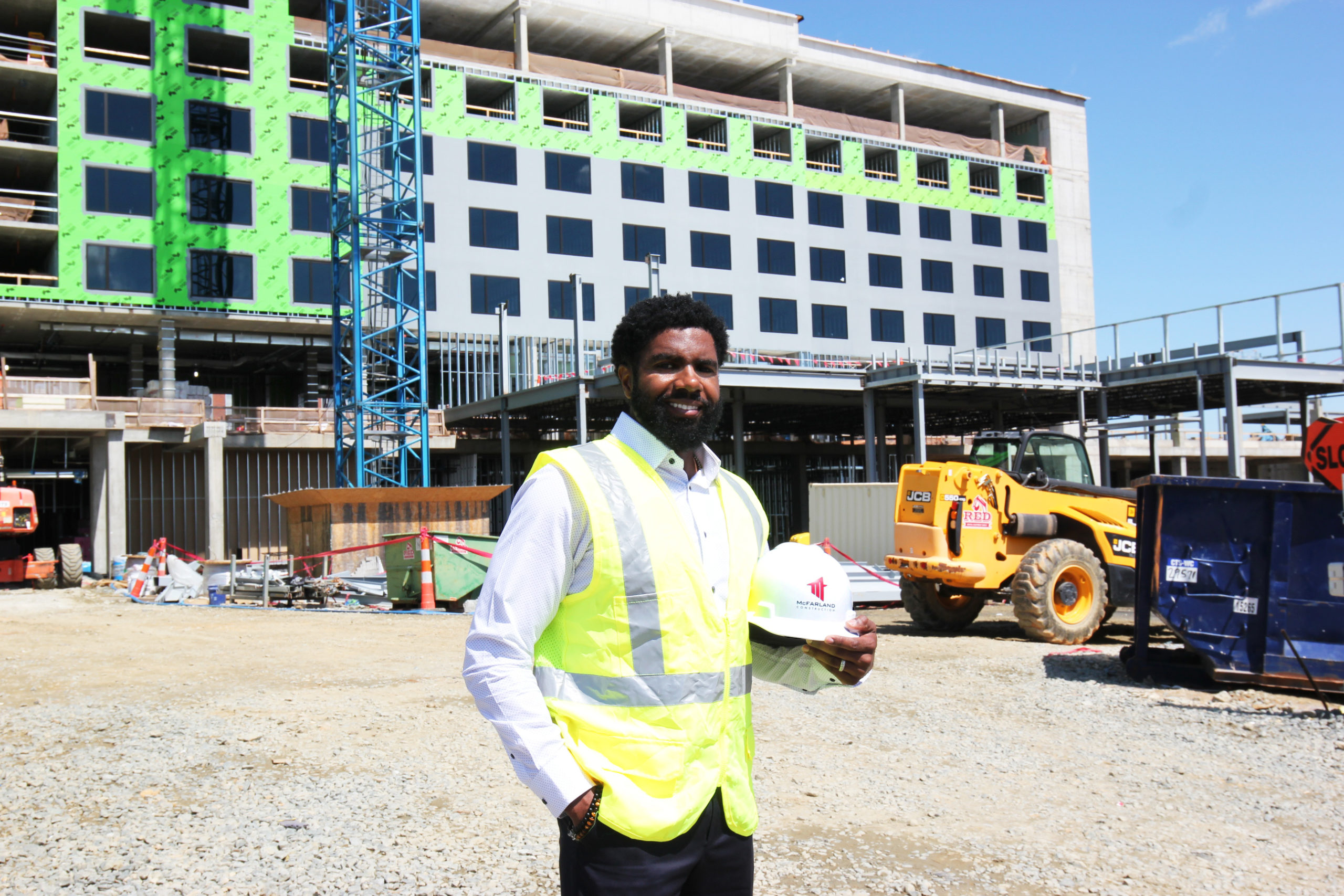 Tino McFarland, president and CEO of McFarland Construction, at the construction site of the Marriott Hotel and Conference Center at UNC Charlotte. Photo courtesy of Tino McFarland

At 34, Tino McFarland started McFarland Construction in the third bedroom of his Charlotte townhome. It was 2010, not more than a year after the Great Recession, and according to McFarland, there wasn’t a lot of work going on for the new construction firm.

Ten years later, the Charlotte-headquartered company is marking the milestone in the face of another economic recession.

Within a decade, McFarland Construction has grown from an idea to a large-scale business achieving $23 million in revenue last year. The company also expanded with satellite offices in Fayetteville and Virginia Beach. McFarland, who serves as president and CEO, says sales are estimated to reach $30 million by the end of the year.

“It’s hard to believe it’s been 10 years. It goes by so fast,” he told QCity Metro. “Driving toward your plan and taking advantage of the opportunities that come by, you look up and the years have already passed.”

April 22 officially marked its 10th anniversary, however, the formal celebration was pared down to a sentimental toast on a Zoom call with the team because of the Covid-19 outbreak.

Under the statewide stay-at-home order, construction workers were deemed essential, so the work continued. There are currently 30 construction projects underway, including the Duke Energy Metro Tower in uptown Charlotte, Phase 2 of the Concourse A expansion at Charlotte-Douglas International Airport, and the Marriott Hotel and Conference Center at UNC Charlotte.

Office staff has been working remotely for weeks and will continue until May 25. At construction sites, superintendents have incorporated safety protocols like mask requirements and daily temperature checks.

“Everything that we do, from an operations and planning perspective, starts with safety leaders working hand-in-hand with our project superintendent, senior project managers and trade partners to implement our screening, social distancing, sanitizations and PPE programs,” McFarland explained.

He has limited the number of workers at sites, which he says often translates to a reduction in productivity. To counteract the loss, the team has added multiple shifts and/or weekend work to keep projects on schedule.

Path to a CEO

From a young age, McFarland knew entrepreneurship would be his path. He comes from a family of business owners. His grandfather, Zeddie Brownlee, owned a small engine repair shop. His father, Calvin McFarland, managed a full-time job and several side businesses. When Tino was 9, his father helped him set up his first business.

“I had several lawns in my neighborhood that I maintained, along with a monthly rent payment that I made to my father for the use of his mower,” he recalled. “I ran the lawn service for about seven years until I was old enough to get a job at the local grocer.”

Also because of his father, the younger McFarland was always fascinated by the building environment. He took interest in things like concrete finishing, framing and roofing. Initially, he assumed that his career path would lead to civil/structural engineering, but after college, he landed a position on a large construction project for the Department of Defense.

“The exposure to construction field operations, on what was a very large project, grabbed my attention, and I have never looked back,” he said.

McFarland witnessed others who started construction companies, learning from their triumphs and mistakes. The idea for his own construction company didn’t seem too far-fetched because of his work experiences and relationships he built.

“I established a brand name for myself and the way we can do our services, so I leaned into that to get our company positioned,” he said.

Still, McFarland believes his business has been fortunate not to have been greatly affected during the pandemic. A few projects have been pushed back, but the majority are still on schedule.

Despite having to pause a formal anniversary celebration, the team is planning a get-together once the stay-at-home restrictions are lifted. There were talks of doing an open house for their new office space, the Addison Building on East Morehead Street.

McFarland Construction has come a long way from the original two-person team of Tino and his wife. Now, there are roughly 40 team members and counting. He continues to be encouraged.

“We are about to embark on some of our largest projects to date. I anticipate a few years of growth in front of us.”